ABC7 Will No Longer Work With Camera Operator Who Insulted Armenians 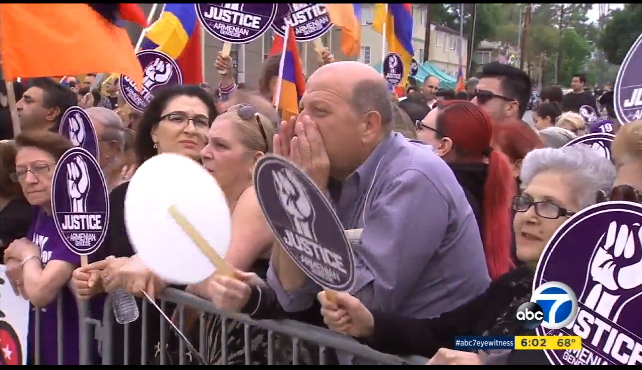 KABC TV President and General Manager Cheryl Kunin Fair in an email to the Armenian-American publication Asbarez said that the camera operator who insulted Armenians while interviewing two Turkish-Americans on April 24 is not a staff employee of ABC7 and the TV station will no longer use his services.

“We thank the community for bringing this video to our attention. ABC7 does not condone what was said on the video and apologizes to those offended. The photographer in question was not a staff employee of ABC7 and the station has determined his services will no longer be used,” said the KABC TV president and general manager, adding that most importantly, the story from that coverage is “fair and accurate.”

Earlier, in a video circulated online, an ABC7 camera operator identified as Tim, in the course of interviewing two Turkish-Americans, said the majority of Armenians are “thug-type idiots.”

The video wasn’t the one filmed by the ABC7 camera operator, but rather, one of the interviewees had asked an associate to also film the entire interview.

In this video filmed in Los Angeles on April 24, referring to the Armenians nearby, those protesting outside the Turkish Consulate, the camera operator says:

“I haven’t tried to talk to them because most of them are like thug-type idiots. Once you start talking to someone you just get a lot of ‘rarara’ behind it.”