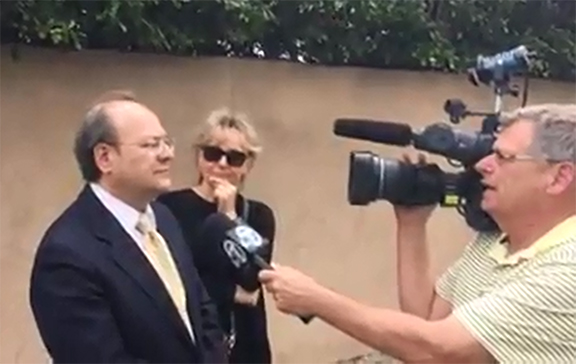 In a video circulated online, an ABC7 camera operator identified as Tim, in the course of interviewing two Turkish-Americans, says, “…most of them [Armenians] are like thug-type idiots.” (ABC7 or KABC is the Los Angeles and Southern California arm of ABC.)

Armenian-American media reported that the video was filmed on April 24, when Armenian-Americans were participating in an Armenian Genocide “Rally for Justice” in Los Angeles outside the Turkish Consulate.

The video was uploaded by one of the two people being interviewed, Ergun Kirlikovali (former president of the Assembly of Turkish American Associations). Naturally, this isn’t the video shot by the ABC7 camera operator. It’s simply that Kirlikovali asked one of his associates to also film the interview and at the 5:21-minute mark viewers can hear the camera operator’s assessment of Armenians.

“I’ve noticed you guys are pretty peaceful back here and holding your ground. I haven’t tried to talk to them because most of them are like thug-type idiots,” said Tim, the camera operator, adding, “Once you start talking to someone you just get a lot of ‘rarara’ behind it.”

Near the end of the video, Kirlikovali asks ABC to invite him for a discussion on what he calls “Armenian territorial claims” and “Armenian terrorists,” to which Tim concurs, “Yeah, Armenian gangs.”