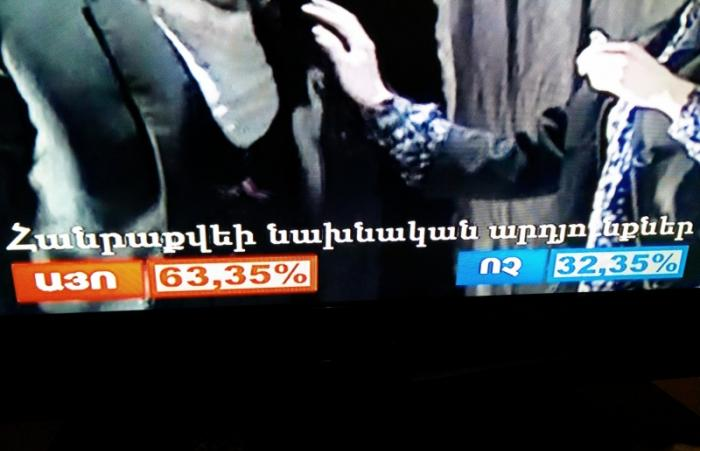 Though Armenia’s TV stations were balanced in their coverage of the campaign of the referendum on constitutional amendments, nevertheless, there were some problems with the coverage.

According to results of the Yerevan Press Club (YPC) monitoring, carried out between October 26 and December 4, 2015, the six TV stations that were studied (First Channel, Armenia TV, Shant TV, Yerkir Media, Kentron, and h2) covered the campaign without apparent bias.

According to the monitoring report, the TV stations aspired to form their programming in such a way that certain positions expressed on the draft would be balanced by opposite views, but, nevertheless, the Republican Party of Armenia (HHK) had a certain advantage.

“Certain deviations from balanced coverage […] can be explained not by the policies of the studied channels per se, but rather by the passivity of some participants of the promotion campaign, as well as by the traditionally wide coverage of all the rare occasions when the head of state [Serzh Sargsyan] communicates with the media,” reads the report.

According to YPC President Boris Navasardian, as a result, HHK’s coverage advantage over the remaining political parties was due to Armenian President Serzh Sargsyan’s interview.

“We can’t say there was a violation of the law, but in terms of the campaign’s policies, it was an unwelcome occurrence. That one interview completely changed the picture and gave the advantage to HHK, whose leader is Serzh Sargsyan,” says Navasardian.

The YPC sees the Yerankyuni (“The Triangle”) program broadcast on the First Channel as an example of a contemptuous approach to commonly accepted principles of coverage of political campaigns.

“The fact that the first issue of the programme was aired on November 6 (the day when promotion on television in fact began) and that two of its five issues were devoted to the constitutional reform, serves as indirect evidence that this weekly program was linked to the referendum.

“The anchor of this debate program was RA Minister of Education and Science Armen Ashotyan, who is also the Vice-Chair of the ruling HHK (the Chair of the party and the author of the initiative of amendments to the RA Constitution is Armenia’s President Serzh Sargsyan). Regardless of the program’s content and the anchor’s role in it, these facts permit [us] to view the broadcast of Yerankyuni on public airwaves as an obvious precedent of conflict of interest,” reads the report.

According to Navasardian, during the entire monitoring period, the programs studied on Armenia TV not once mentioned either the positions or activities directly relating to the constitutional amendments of the No Pasaran! or New Armenia initiatives, though these civic movements were established specifically in connection to the referendum. Neither the Second Armenian TV Channel (h2) nor Shant TV allocated any coverage to the No Pasaran! initiative.

“Yerkir Media actively covered the positions of civil society. This was the only TV station where civil society received more airtime than any parliamentary party,” says Navasardian.

According to the findings of the YPC study, HHK was the only party that had paid airtime on all six TV stations, which speaks to the party’s resources.

“Generally, HHK took 65% of the paid airtime on all the TV stations [in the study]; the remaining five political parties accounted for the 35%,” says Navasardian.

The second party to make use of paid airtime was the Armenian National Congress (HAK).

According to the monitoring results, as voting day approached, the perception that HHK and HAK were the main debating parties became more pronounced in the media.

“Throughout the whole period of the monitoring, Republicans turned out to be the undisputed leaders in terms of their allotted airtime, and HAK not only found itself in second place among the

parliamentary parties according to the cumulative indicator on all channels studied, but also received a larger volume of coverage than the two other parties from the ‘No’ camp, Heritage and Orinats Yerkir [Rule of Law], together,” reads the report.