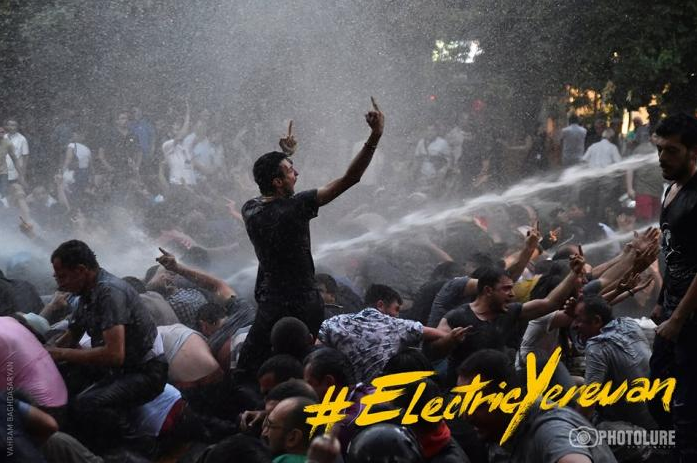 The summer of 2015 will remain in Armenia’s history as the summer of the #ElectricYerevan movement — the intense and alluring environment of its fortnightly struggle documented by various photographers and journalists.

The most compelling, however, were the images of the first day (June 23), thanks to which Armenia understood that its police officers had used force against its young citizens and that coming to stand on Baghramyan Avenue is necessary. More precisely, being on Baghramyan Avenue, since being is always more preferable than not being (for instance, watching online).

Yerevan took that step: it united, with no idea what would happen the next minute. What was important was the here and now.

The news that water cannon vehicles were used, while those protesting the electricity price hike were assaulted and detained was as inspiring as it was infuriating. The reason wasn’t the action (the use of force) but the reaction (the power to resist the force).

The most famous #ElectricYerevan photo that also was shared worldwide the very first morning was caught by Photolure news agency photographer Vahram Baghdasaryan: a wet, angry young man standing in front of the stream of water with his hands raised, sending his opponents a very clear message with his two middle fingers.

All are sitting or have fallen on the concrete; he is the only one standing. Perhaps in the next second the powerful stream of water will topple him too, but as long as he’s still standing, the photograph continues to affect viewers, demonstrating the charm of the defiant pose. The man facing the element and violence is just as natural as the element itself. He is tantamount to the force. At least in this instant…

This photo became the symbol of the movement and is now on exhibit with Photolure’s other photos at the Union of Journalists of Armenia. Seventy photos, hanging side by side, are a record of the result of four photographers’ work. All the photos are shots of the event, but some are more than that.

The photos taken on the ground, which were able to convey the atmosphere and the potential to resist, became simultaneously a source of information and a generalizing document like works of art.

Very few texts can achieve this effect, which a documentary photo can attain. It’s difficult to combine an event and abstraction in a photograph, but when they are combined, they are no longer forgotten. They pierce our memory. This is what happened with some photographs taken during #ElectricYerevan, which found their nameless subjects among the ranks of diverse protestors. And with that they also gave value to the movement.

Vahram Baghdasaryan, speaking about his famous photograph, says: “I didn’t find my subject — he found me. When the water cannon vehicles took over, everyone huddled and remained seated; only one boy stood up. And that was the moment I clicked the shutter. I didn’t know who he was, where he’s from, but I understood that the photo turned out. And then days later I became acquainted with the subject of my photo.”

The subject of the photo, Kamo Ghukasyan, gained public recognition, gave interviews, and already shares in the glory of the photo.

Now when half a year has passed since #ElectricYerevan, the photo exhibit is more so regarded with nostalgia. The atmosphere during that time was alluring and endowed with magnetism. It’s no accident that the desire to relive it is great, and the hall, crowded.

Photolure Director Melik Baghdasaryan is confident that people are coming to look at the photos because they miss those days. “Of course there was also a danger because no one knew what was going to happen in the next moment. All of us were in a state of constant vigilance,” he says.

The issue is that the photos should’ve been not only taken, but also preserved. After all, in the initial days, very important photos were seized by police. “And they [i.e. recording equipment] were returned with blank memory cards,” adds Melik Baghdasaryan.

A photographer is very much like a hunter. His eye and weapon (the camera) is always greased and turned on, and his finger, on the trigger (the shutter). He is ready to be both alert and unnoticeable (lying in ambush). During tense situations, a good shot is borne from these two opposing states.

During the days of #ElectricYerevan, there were many such shots.