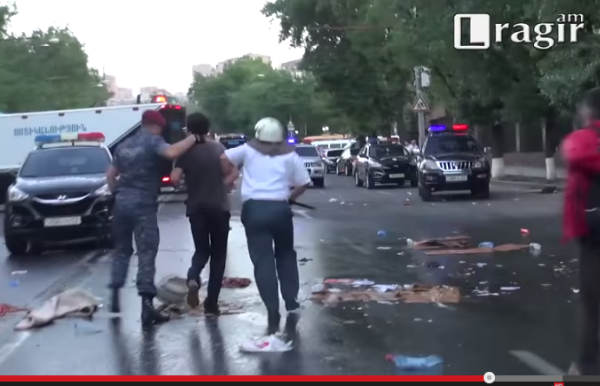 A criminal case has ben launched with Armenia’s Special Investigation Service (SIS) in connection with obstructing journalists’ professional activities and deliberately destroying or damaging property on the morning of June 23 during the dispersal of sit-in demonstrators on Yerevan’s Baghramyan Avenue protesting the electricity price hike.

“By studying the reports, materials, and video footage published by mass media, information has been acquired on the fact that with the aim of ending the demonstration and subsequent sit-in on Yerevan’s Baghramyan Avenue organized by the No to Plunder civil initiative against increasing the electricity rates, during the special measures carried out on June 23, 2015, as well as on the following days, persons carrying out special state services, clearly exceeding the scope of their powers, used force on Baghramyan Avenue, in Liberty Square, in neighbouring areas and different subdivisions of RA Police against demonstration participants and a number of journalists covering the events, caused bodily injuries, damaged or destroyed their video recording equipment, by which they prevented the journalists from their lawful professional activities, causing essential damage to the rights and legal interests of individuals and organizations, and to the legal interests of the society and the state,” reads the SIS statement, in part.

As a result of police operations on June 23, 13 journalists and camera operators were physically attacked [AM], the lawful professional activities of about 15 representatives of various media outlets were hindered, journalists’ equipment were broken or damaged, and video cameras and memory cards were confiscated.

In Committee to Protect Freedom of Expression (CPFE) President Ashot Meliqyan’s opinion, launching a criminal case is due to the response by local and international press and media organizations.

“Nevertheless, it doesn’t yet mean anything. We have instances of where a journalist’s activity was hindered, a criminal case was launched but then quashed, deeming there to be no crime. This time likewise they’ll try to take this route,” says Meliqyan. 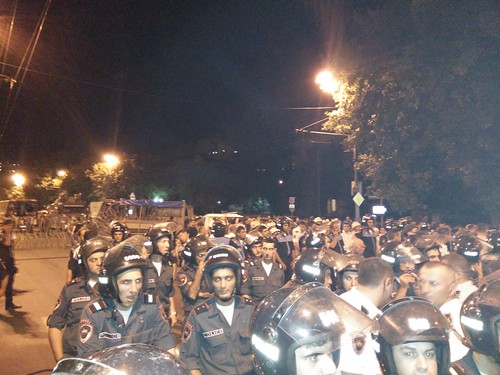 The CPFE president finds that the journalism community has a big role to play — in terms of monitoring the processes, drawing public attention on them, and follow-up reporting.

“This is very important. And it’s important that the affected journalists be very consistent in following through and continue to fight for their rights,” he says.

One of the journalists affected by the June 23 police actions was RFE/RL’s Armenian service (Azatutyun) journalist Sisak Gabrielyan.

“They thought once they turned on the water cannons, everyone would disperse. When they saw that no one was going anywhere, plainclothes police officers began to disperse people. At that time, someone came and pulled our live stream cable. And various people in civilian clothes were regularly hitting me from behind,” says Gabrielyan.

“When we entered Liberty Square, I saw our [camera] operator Garik being taken away by 3–4 people. I approached [them] and said, ‘What are you doing, he’s my [camera] operator.’ Someone came, twisted my arm, and said, ‘Let me see where you’re from.’ He picked up the badge hanging from my neck, looked at it, yanked it and threw it on the ground, and said, ‘Get away from here; you’re no longer a journalist.’ He attacked and broke the front part of [my] camera. When I crouched down to collect it, he kicked it and while kicking it he also hit my hand. I, confused, ran to our other journalist, Artur Papyan, to tell him that they took Garik, only to see that someone threw Artur’s phone on the ground. Artur said, ‘Brother, why are you doing [that]?’ He [replied], ‘I’m not your brother’ and cursed. Artur bent down to pick up [his] phone, he kicked it again,” describes Gabrielyan. 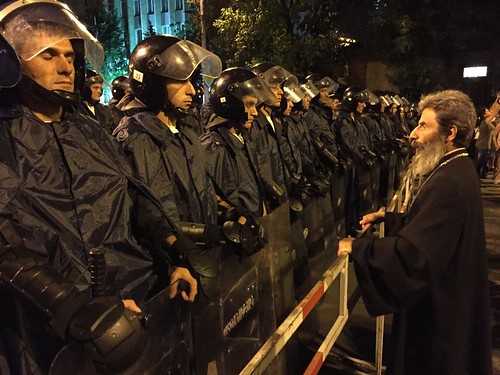 iLur.am journalist Hakob Karapetyan describes how police officers confiscated his video camera’s memory card, which he had hidden in his pocket.

“[First Deputy Head of Armenian Police, Lieutenant General] Hunan Poghosyan ordered to take the camera out of my hands. When they didn’t find a card in the camera, they began to search [me]. Poghosyan ordered to find the memory card and return the camera. And about the memory card, he said, ‘You’ll come to the [police] division and get your empty [memory] chip. When I asked the officer who took the memory card where I can get my card back from, he said in a very rude tone, ‘What chip, brother, are you slandering me?’ Their tactics were already clear to me,” he says.

[You can read the stories of journalists who were assaulted on June 23 here.]

In attorney Gevorg Hayrapetyan‘s opinion, the future process of the criminal case depends on public pressure.

“Though there should be nothing extraordinary about launching a criminal case to check the legality of police actions, since that’s why SIS exists, amid a severe lack of public trust in Armenia in the possibility of ‘punishing one’s own,’ I think it would be better not to hope for the independence and impartiality of law enforcement and keep the public’s attention on this case. Public oversight may be that leverage that will restrain law enforcers and not allow a possible cover up,” says Hayrapetyan.