#ElectricYerevan: Stories of Journalists Who Were Attacked (Updated) 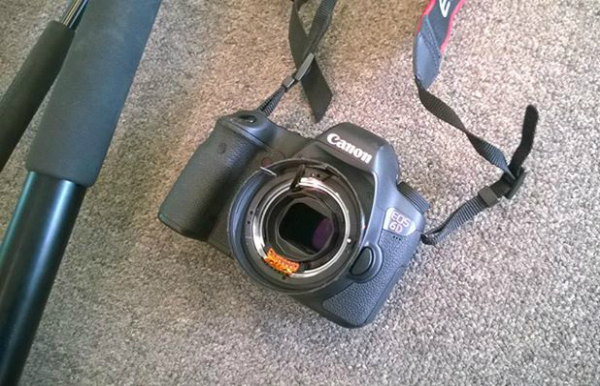 There are journalists who have yet to find out where their equipment is.

The number of journalists who were attacked and detained is growing; we will update the list as more information becomes available.

Some of the journalists’ stories are presented below. 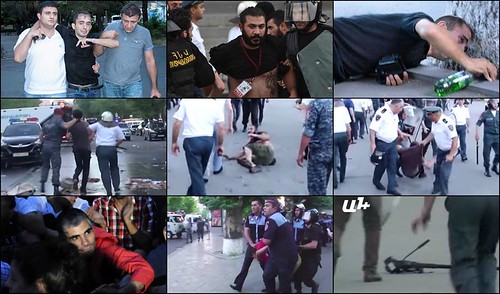 Around 5:30–6:00 am, when they put the water cannons to work, they drove people to France Square; they completely emptied Baghramyan Avenue; police officers went after people. They detained some of them. The others, whom they couldn’t catch, gathered in Liberty Square.

I and our camera operator Khachatur Yesayan followed them. A few minutes later, police officers gathered all their personnel and began to attack demonstrators. I and the camera operator, as well as my colleagues from other news outlets, standing to the side, caught on camera what was happening; we did our work.

When they caught the main group of demonstrators, it was our turn. I didn’t even notice how they attacked me because I looked away for a moment and all at once 4 people attacked [me] — by the way, law enforcers in not only police uniforms, but also civilian clothes.

I couldn’t imagine that police officers could act this way because it really was incompatible, what we hear about reforms with what happened to me. I want to stress that they didn’t take into account that I’m a journalist. When I showed my [press] badge, police officers tore it and detained me.

Till now, I don’t know where and in what condition [my] equipment is.

When I was already concluding taking photos near Tumanyan’s statue, someone from my left flung his hand to swipe the camera. I resisted, when [someone] from the other side wrestled for it. They were plainclothes law enforcers. I held my photo camera tightly and sat on the ground.

A few people were tugging, hitting; fortunately, there were no injuries. They snatched my camera from my hand, threw it on the ground, and dragging it on the ground, took it away. Then I saw in a video that one of them tucked it under his arm and left.

After that, “the masked” [riot police] took me to Kentron Police Division, then to Etchmiadzin [Division], took down my information, and released me.

I have no information where and in what condition my camera is. 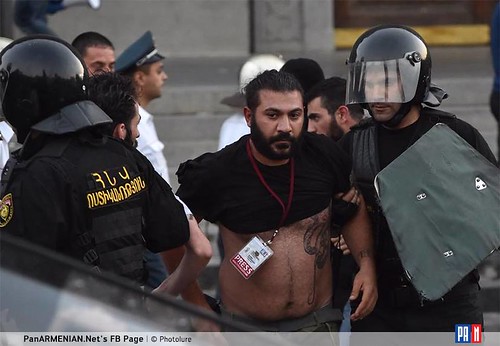 At around 5:30 am, plainclothes individuals [police officers] began to smash people left and right. And from the front, the water cannon began to spray water. They drove people toward Liberty Square. At Liberty Square, they began to hit, curse, and detain.

I was near Liberty Square with my two friends, filming the entire beating and butchery, the curses. Someone in civilian clothing came running after us from behind, grabbed us, and began to shove one of my friends so he’ll attack.

I intervened and said, I’m a journalist; I showed my badge. He said, so I’ll detain all three of you. And they did. They didn’t lay a finger on me, only pushed me, when I intervened not to hit my friend.

At the corner of Opera and Mashtots I saw that police officers had circled a female activist and were saying insulting things; they were cursing. I approached and asked them not to curse. I hugged the girl because she didn’t feel well, she was crying.

One of the police officers quite violently approached and said, “Detain these two!” About 10 people grabbed us however they could and took us. In the process, they hit [us]; pushing and shoving, they took everything including my photo camera. I don’t know who took it and where it is.

When they began to gather and detain demonstrators near the Opera, they came after me too. After running and escaping for some time, I sat on a bench at Northern Avenue to catch my breath, as I was breathless. At that moment, two police officers approached me and said, move.

I said, I don’t feel well; I’ll get up and leave in two minutes. Initially, they put their hand on my windpipe, then lifted me and shoving, took me away, cursing in the process. Not having yet reached Teryan Street, they knocked me down and began to hit me, kicking me and striking me with their shield.

One was telling the other, hit with the jet so no mark remains. After hitting [me] for a few minutes, another officer appeared, who, as I understood, was from another squad. He took me away from those officers, helped me to get up and go sit on the bench.

He looked at my badge and understood that I’m a journalist and apologized, saying, “It wasn’t supposed to be like this; I’m sorry for everything.” After that, they left me; they left.

Hitting me were the angels with whom I had been having friendly conversations the entire night… hitting me was he with the red beret [riot police], hitting me was the plainclothes police officer… I don’t know what else to say, much broke inside me regarding the system

When they picked up demonstrators from Liberty Square and took them away, and remaining were only police officers and journalists, who were photographing or filming, I saw how [Commander of Armenian Police Troops, Deputy Head of Armenian Police, Lieutenant] General Levon Yeranosyan broke one of the [camera] operator’s video camera while cursing. And when he gave an order, ‘Get these guys,’ I realized there is no point in staying, and I escaped toward the Tumanyan–Northern Avenue area. Leaving the square, I encountered Panarmenian.net correspondent Nikolai Torosyan.

Several police officers headed by the Major ran up to us and ordered me to follow them. I asked them to identify themselves and say why they want to take me away. They gave no explanation and grabbed my hands. I saw that they were hitting my colleagues and realized that if I don’t follow their orders they’ll hit me too, so I followed them. At that moment police officers didn’t pay attention to Nikolai — I assume because he wasn’t holding a video camera. Nikolai said, “Give me your camera” — he tried to save that at least. I told him, flee. When they were taking me, I looked back and saw that some from that group of officers attacked Nikolai and began to hit him. On the way, I removed the memory card from my camera and placed it in my pocket.

They took me to Liberty Square where several rows of police forces were lined up; standing with other officers were also [First Deputy Head of Armenian Police, Lieutenant General] Hunan Poghosyan and Levon Yeranosyan. Hunan Poghosyan told me, “I warned you.” Initially I didn’t know what he was talking about. Then I assumed that he was talking about the conversation we had earlier that day. Ahead of the June 23 operation, when plainclothes officers appeared, I asked Poghosyan, “Why aren’t police officers in uniform? Perhaps the police has a deficiency in uniforms?” He said, “You also speak about police officers exceeding their powers, but at this moment you’re exceeding your powers.”

I called the police’s public relations department several times [but] received no answer regarding my memory card. Then I contacted the central police division and reported a crime regarding my journalistic activities being hindered.

On the evening of June 23, when Hunan Poghosyan conveyed at a meeting with journalists that [Armenian Police Chief] Vova Gasparyan is sorry about the disproportionate actions toward journalists and mentioned compensation, I asked, “My memory card that was taken following your orders, where can I get it back from?” He said, “My dear, you are mistaken, I didn’t give anyone the order to take your chip.” He denied everything.

Till today, they haven’t returned my memory card.

On Baghramyan Avenue, the police announced several times with a loudspeaker, “Dear journalists, leave the area, the police is moving onto special operations”; they suggested we get on the sidewalk. But that wasn’t possible because standing there were plainclothes police officers. They thought plainclothes officers won’t have anything to do because once they turn on the water cannons everyone will disperse. When they saw that people weren’t going anywhere, plainclothes police officers began to disperse people. During that time, someone came and pulled our live stream cable. And various people in civilian clothes were regularly hitting me from behind.

When we entered Liberty Square, I saw our [camera] operator Garik being taken away by 3–4 people. I approached [them] and said, ‘What are you doing, he’s my [camera] operator.’ Someone came, twisted my arm, and said, ‘Let me see where you’re from.’ He picked up the badge hanging from my neck, looked at it, yanked it and threw it on the ground, and said, ‘Get away from here; you’re no longer a journalist.’ He attacked and broke the front part of [my] camera. When I crouched down to collect it, he kicked it and while kicking it he also hit my hand. I, confused, ran to our other journalist, Artur Papyan, to tell him that they took Garik, only to see that someone threw Artur’s phone on the ground. Artur said, ‘Brother, why are you doing [that]?’ He [replied], ‘I’m not your brother’ and cursed. Artur bent down to pick up [his] phone, he kicked it again.

Shortly after, when we saw Hunan Poghosyan, we said they’re taking our [camera] operator away. He said, “Go tell them Hunan Poghosyan says let him go.” The officer in whose presence Poghosyan said all this opened the car door where they had picked up demonstrators and journalists and asked, “Is Garik here?” Garik from inside replied, yes. The officer said, “Ok, then stay there” and shut the door.

Dear colleagues, you can send your stories of being attacked or detained to [email protected].