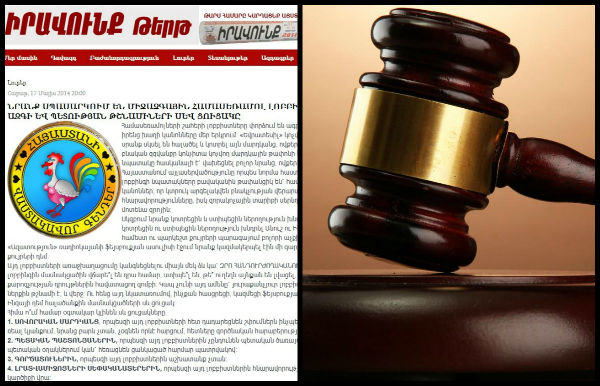 Sixteen people have submitted a joint lawsuit against local newspaper Iravunq for sullying their honor and dignity.

The reason for going to court was an article [AM] Iravunq published on its website on May 17, 2014, with the headline: “They serve the interests of the international homosexual lobby: Black list of enemies of the state and nation” [the term used for “homosexual” was derogatory, akin to “faggot” in English]. The article lists the names of 60 people, with hyperlinks to their Facebook profiles and urges its readers to show “zero tolerance” toward them, terminating all contact, not hiring them, and removing them from civil service.

The plaintiffs are asking for a public apology from Iravunq (to be published on the paper’s website), as well as 5 million AMD (a little over $12,000 USD) in compensation for the injury.

“That article not only sullies our honor and dignity, but also contains insult, hate speech, and discrimination. The author of the piece called us an enemy of the state and nation, which, in fact, referring to the same national security approaches, is a very serious offense,” said one of the plaintiffs, Public Information and Need for Knowledge (PINK Armenia) NGO President Mamikon Hovsepyan.

Hovsepyan says that prior to taking the matter to court, they tried to settle the issue through other means, but to no avail.

“Before going to the court, of course, we tried to find a more civilized solution; we sent a request for a retraction to the editorial team, hoping they will publish the retraction, and the case would be closed. But on the contrary, the names of those asking for retraction were again published [AM], and again through disinformation an attempt was made to brainwash readers,” he said.

Another individual suing the paper, Women’s Resource Center of Armenia NGO Media and Communications Manager Elvira Meliksetyan, believes that Iravunq‘s article is the most brutal example of libel and labelling.

“In the past, there were also cases when Iravunq defamed or published insults against me personally, but this time [they’ve] crossed all possible and impossible limits and boundaries. Those labels that they’ve placed on us are very liable statements. No one has the right to jeopardize others’ safety by voicing such serious accusations,” she said.

Meliksetyan finds that this court case might once again be a reminder to news media not to forget journalism ethics and human rights when reporting.

Iravunq newspaper editor and author of the article in question Hovhannes Galajyan is quite calm when it comes to the lawsuit.

“It’s not the first lawsuit, and it won’t be the last. In the newspaper’s experience, they’re quite a lot. If anyone perceived that as an insult, that’s his problem. I have the right to consider it as serving the interests of the gay lobby,” he says.

The newspaper editor sees no other option of settling the dispute other than in court.

“What general conclusion can I reach with those people who willingly or unwillingly participated in that act, which clearly serves as lobbying for a certain group? They’ll see their napes, but they won’t see an apology,” he says.

Note, two other lawsuits were launched against Iravunq for the same article: separate lawsuits were filed by Daniel Ioanisyan and employees of New Generation NGO.