Film as Educational Model Begun to be Applied in Armenia 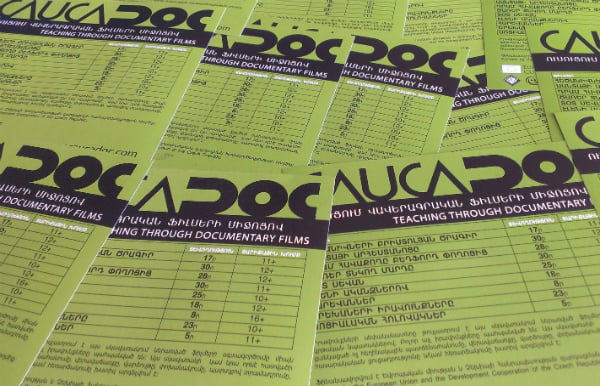 Documentary films being part of the general education program of children and youth is a model actively applied by the Czech NGO People in Need.

The Teaching through Documentary Films program is based on One World Festival‘s audiovisual materials and presented to primary and secondary school students, as an interactive addition to learning.

The Czech experience of running the program for 12 years has confirmed that documentary films are an interesting and effective way to acquaint young people with difficult world issues and initiate debates and discussions. Presenting social, environmental, human rights protection, and other current issues through documentary film nforms students, while also developing their accountability toward events taking place on the planet.

The best examples of documentary cinema with their complete structure and acute topics motivate youth to search for ways to solve similar problems in their own country and environment.

The long-term program Teaching through Documentary Films is implemented in not only 3,000 Czech schools, but also educational institutions in different countries. Last year, Armenia joined the rank of countries.

The People in Need representative office in Armenia together with Media Initiatives Center [the organization behind this website] implemented the “Let’s talk about films in the South Caucasus/CAUCADOC” program.

The program consisted of several components. First, the documentary films, public service announcements, and animation films were copied and completed on one disc. Armenian students were able to view the films in their mother tongue, which in our linguistic confusion is a very important starting point.

With the aim of making teacher-student communication following the film screenings more practical, the Learning through Documentary Films methodology handbook [PDF] was created, which was given the green light by the Ministry of Education and Science of the Republic of Armenia. Incorporated in the handbook apart from the video disc were materials designed for interactive activities and possible options of building lessons — with the use of role play, quizzes, and questionnaires.

Apart from beginning a dialogue, discussing, and gathering information, the Learning through Documentary Films program is also a program that encourages shaping taste and seeking solutions to topics of concern.

It’s a known fact that any topic (especially related to human rights, conflict, family relations, discrimination, and tolerance) is appropriated faster and forgotten later when presented through specific human destinies. Theoretical words will never have the effect that the moving picture has. Young people become acquainted with the (sometimes happy, sometimes tragic) lives of their peers living in different countries and express their views during group exercises.

And it’s possible that the viewpoints of the youth in the near future are made into films. In any case, the Teaching through Documentary Films program also pursues this later purpose. Already in many European countries where film screenings and discussions have been held regularly, founded and actively operating are film clubs. Children organize film festivals in schools and learn to shoot their own films.

Film is one of the best platforms of self-expression for children and youth. Future citizens born and raised in this decade and inundated with technology will shoot films from completely different heights. And it is school that must provide the heights and enthusiasm.