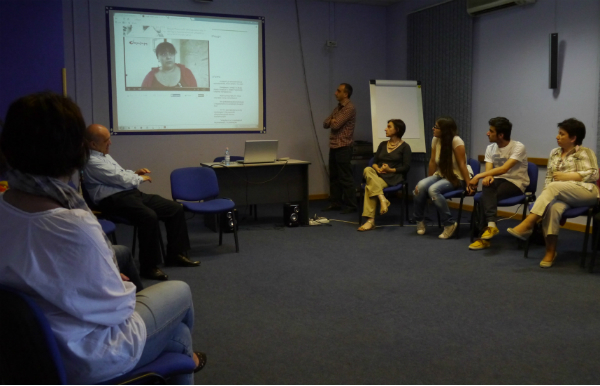 Lradadar Club, one of the initiatives in recent years of the Media Initiatives Center, is an informal gathering for professional discussions on the media for journalists and others working in news media.

The topics discussed in the club vary and include the developments, created content, and existing relationships, as well as growing controversies in media.

Those participating in the discussions are people in the industry: journalists, editors, directors, managers, critics, analysts.

On May 23, Lradadar Club discussed a few clashes between Members of Parliament and journalists at the last parliamentary sitting. The conversation was mainly about MP Shushan Petrosyan’s comment about journalists. But the broader discussion asked such questions as why do conflicts arise with MPs, officials, or public figures in general, and how does editorial staff respond to such incidents?

Are these incidents discussed in newsrooms? What conclusions are made…?

If an editorial team admits the journalist made an error, what steps are taken? What practice do Armenian news outlets adopt today to correct journalists’ mistakes?

Media.am summarized the opinions made at the discussion and presents them below in point form.

The view that asking Petrosyan about the shooting in Vernissage was dilettantism on the journalist’s part is not justified. She asks that she be treated as a singer and not as a MP, but she has been a member of the Republican Party of Armenia’s parliamentary faction for 2 years, and to ask her to comment on an incident involving another MP is an acceptable journalistic approach.

That which happened after this incident — the journalism community uniting and not leaving such incidents unanswered — is a positive step.

If a MP or public figure avoids or doesn’t want to give an interview, it’t not right to consider that an insult against the journalist. Giving an interview or speaking with a journalist should be done based on good will.

On one hand, MPs who are unaware of the given issue should not be asked for comments; on the other hand, this is the best way to show that people are in the wrong place. This approach of journalists helps to reveal the true face of MPs — their lack of competence and being in the wrong place.

Sometimes, journalists with their behavior and the tone and formulation of their question violate the rules of ethics, which is not acceptable. Regardless to whom the question is directed, it should be given respectfully.

Stories about such incidents immediately become the most read, especially in online news media, and, unfortunately, shadow discussions of more serious and important issues.

It’s important to understand what journalists can do to direct people’s attention from rumors and gossip to more serious issues. Journalists and news outlets must have their clear agendas and not allow to be distracted (by MPs and political figures who specifically carry out such manipulations). It’s important for journalists to do their work more responsibly and in covering such incidents, always place them in the correct context. In modern-day journalism, it is no longer important who reported the news faster, but who presented it in the correct context.

There are newsrooms for which verbal slips are important. Such articles help them to collect “clicks” and an audience.

On Discussions Inside Newsrooms

Newsrooms have to clarify for themselves how to respond to such incidents. What is the correct response by journalists to such situations? This is a question that has to be continuously, actively discussed.

There are newsrooms where such incidents are discussed; reprimands are made, penalties applied.

There are issues in newsrooms concerning teaching journalists to present themselves correctly and ask questions correctly. If there are internal rules, they are verbal and not written down.

An MP who verbally abuses a journalist can be boycotted, but it’s not a given that the boycott will be effective. In any case, the journalist must remain professional, not lose his or her wits, maintain standards.

P.S. The names of those who made the comments are not noted; they represent the general spirit of the discussion.