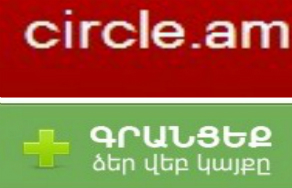 “Circle.am is going to become a quality rating of Armenian websites. It will be built by both moderators and webmasters,” said Circle.am founder and director Avetis Avagyan in an interview to itel.am [AM].

On Feb. 24, 2014, Circle.am moved from a quantitative to a qualitative rating platform. Previously, the platform measured and provided data on visits of those websites that had registered with the site. Now, a website’s rating is based on the scores awarded by moderators and webmasters.

According to information on the site, the moderators are “well-known Armenian media and IT professionals” who work anonymously “to avoid all kinds of pressure and influence from Website owners. They are unbiased and impartial.”

Moderators and webmasters rate registered sites based, in part, on the following criteria:

The recent changes on Circle.am were not completely clear to some online news media previously registered on the site, which is why many of them quit.

One of these sites was News.am. According to News.am agency coordinator Artak Yeghiazaryan, the reason they left is the vagueness of the criteria.

“Since its inception, News.am has participated in the Circle.am rating system, when it was just beginning to develop. From the start, we’ve used and continue to use international tools for measurement, but we believe that it’s worth joining an Armenian platform for the development of the Armenian segment of the Internet. After the latest changes, the agency stopped participating in Circle.am, since for us, it’s inexplicable what they are measuring and who is doing the measuring,” he says.

News.am uses Google Analytics for marketing, but, according to Yeghiazaryan, if another Armenian measurement system is developed, using a different logic and format, the agency will join it.

Circle.am’s new rating criteria is unclear also for Tert.am, which is why the Armenian news site also terminated its membership.

“It’s incomprehensible what principles they are guided by; it’s especially unclear who are the people making assessments, and whether there isn’t an element of subjectivity,” Tert.am’s chief editor Sasun Khachatryan tells Media.am.

Tert.am, as before, now too continues to use Google Analytics.

According to Khachatryan, the change to the format of Circle.am had a positive effect on media.

“Of course, there is still stress, since we’re dealing with the news, but there isn’t that artificial race as before. And best of all, the quality of journalism has increased slightly — the earlier cheap tricks to accumulate ‘clicks’ are no longer employed, though occasionally you can still come across such content,” he says.

Aravot.am likewise has not renewed its membership to Circle.am, though the website is still registered on Circle.am and is second place among the top 10  in ArmNet.

“Securing a top place on Circle.am was never a goal for us, especially considering that a website like Hetq.am is in the last places, while empty sites are in the top. We simply took note of its data. And now we don’t monitor it at all because if then there was some sort of explanation (visits), now the measurement criteria is incomprehensible and the experts compiling the ratings are unknown,” Aravot.am editor Anna Israelyan tells Media.am.

According to her, advertisers likewise were not guided by the statistics on Circle.am.

“They [advertisers] wanted data from us from Google Analytics. And even if it was assumed in the case of Circle.am that huge figures would influence advertisers, I can testify based on our experience that the Circle.am figures didn’t have an effect on knowledgeable advertisers,” she says.

Circle.am founder Avetis Avagyan didn’t wish to comment on the changes to the site. He told Media.am that he doesn’t yet consider it appropriate to give an interview on the new system.

In media expert Samvel Martirosyan‘s opinion, since the change in Circle.am’s strategy, competition between Armenian news websites regarding traffic has decreased.

“Websites having many readers spread content with unhealthy, sensational headlines less [than before]. Furthermore, I can assume that the amount of money website owners spend on Facebook advertising went down by several times,” he says.

According to him, the change to Circle.am has not yet reached its purpose, but it’s an interesting attempt in terms of assessing the content of websites.