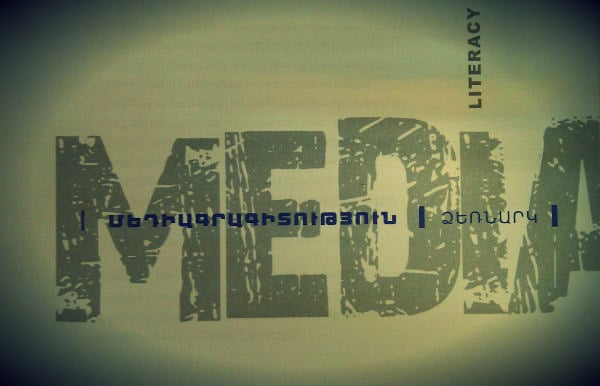 Anna Atabekyan is a grade 9 student at primary school no. 69 named after Andrei Sakharov. She frequents a media literacy group called Mediagragitutyun (“media literacy”), where she learns how to write the news, take photographs, design the front page of a newspaper, and create a multimedia story with various components.

In Anna’s words, thanks to this initiative, she’s learned to differentiate between true and false information. “Before Mediagragitutyun, I would never have thought that news could be wrong. We all hear and perceive the news as it is presented to us, but when you’re media literate, you begin to be critical of the information that’s conveyed to you,” she says.

Mediagragitutyun aims to teach schoolchildren to handle information offered by the media critically, to imagine the principles of the work of the media, to become acquainted with manipulation tricks, and to be able to correctly navigate through the media market.

“About two years ago we began to develop the media literacy school program. A teacher’s handbook [AM] was prepared, and audiovisual teaching material, academic articles, and games were collected. This initiative will help consumers — in this case, children — to interpret the media, its messages and content critically; to understand what is the media, how it works, what interests, purposes and means of influence it has, and what manipulations it can do,” said head of the Mediagragitutyun program, Lusine Grigoryan.

The program was developed with experts from Armenia’s National Institute of Education. The RA Ministry of Education and Science has endorsed it as a learning aid for schools, which, at their discretion, can choose to take this course and use the content as part of their current curricula or outside of it. Media literacy isn’t yet offered as a separate subject in school.

In the opinion of National Institute of Education specialist Armine Ivanyan, a media literacy course is quite necessary for students in Armenia.

“Having a media literacy handbook and course is very much welcome because when we look at the goals of public education, key is the upbringing of citizens, who in today’s world can find their place, face challenges, and in this regard, very important are skills in navigating, and filtering, searching for, and disseminating information and media literacy,” she says.

The handbook for teachers is comprised of 10 topics — media history, the current situation, legislative and ethical regulations, economic activity and advertising, types of media and their particularities, and skills to critically consume media goods — and is planned for the senior grades.

Since September 2012, this program was tested in a few schools and a few dozen teachers were trained in Yerevan and in the regions. Printed were 300 copies of the teacher’s handbook, which were distributed to schools and interested organizations.

From the teachers participating in the program, 5 were chosen by competition: they received grants to test the program in their schools this fall. 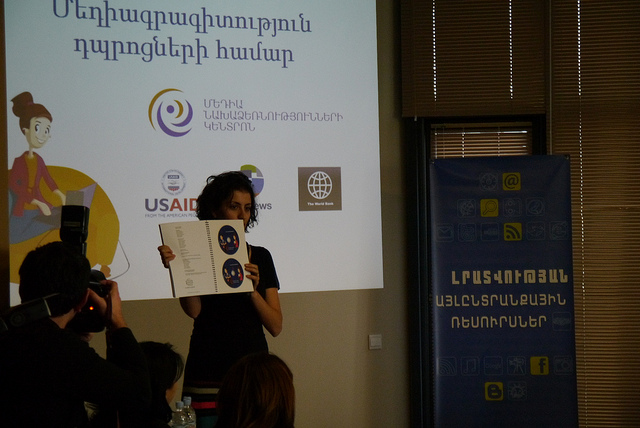 In Yerevan, primary school no. 69 named after Andrei Sakharov vice-principal and physics teacher Karine Samvelyan is one of the teachers who received training and funding. She teaches media literacy to a small group of 14 students of varying ages.

“Media literacy is very important for both the teachers and the students, who are constantly in the media arena and have to navigate correctly, making use of all types of information. Media literacy changes one’s thinking and develops skills,” says Samvelyan.

Also part of the media literacy program is the digital game Mediamart (“media battle”) [AM], which likewise includes the 10 topics of the program. In the game, children answer quiz questions, write a news story, produce a radio piece, gather a TV report, take a photo of a current event, and so on. The game can be played online, and it is also on a DVD included with the handbook.

“The Media Initiatives Center has a lot of experience in non-formal education, and we know that games and non-formal classroom education are very effective. Games are what are missing from schools today. Making the learning process more interactive and interesting is necessary so that children are happy to learn, not even noticing how they’re learning. It’s assumed that before or after every media literacy class, children will be able to play a game on that topic and to discuss during class the results they received,” says Grigoryan, the head of the program.

Games are educational: a child can make a mistake, find the tip to the right answer, compare his prepared news item to those prepared by professionals, and if necessary, return to any topic in the game and begin again, and in the final stage, answer the knowledge assessment questionnaire to find out how media literate he is: to what extent does he understand the work of the media, can he verify what he saw on television, and can he differentiate between propaganda and news?

According to Grigoryan, the next step is to train corresponding specialists in higher education institutions to teach media literacy. Currently, there are 20 master’s students in the Department of Pedagogy at Yerevan State Linguistic University named after Valery Brusov enrolled in the optional course “Teaching media literacy in high school and college”.

Mediagragitutyun is a project of the Media Initiatives Center (formerly, Internews Media Support NGO, the organization also responsible for this site), developed within the framework of the Alternative Resources in Media program and with the support of both the United States Agency for International Development (USAID) and the World Bank.