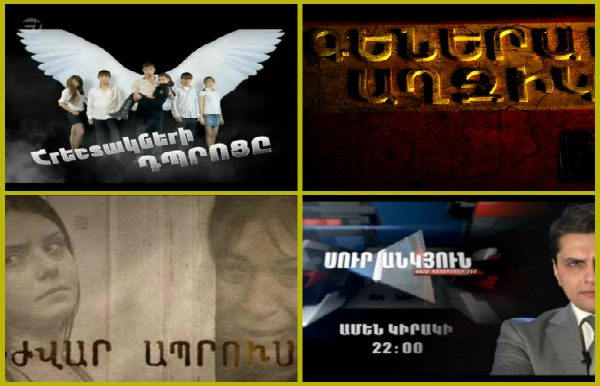 The 2012 figures have made their way into the annual report [AM] presented by the Council of the Public TV and Radio Company of Armenia to the National Assembly.

Telemediacontrol, the company conducting audience measurement ratings, compiled the list of top 10 programs with the highest ratings, and having the greatest audience figures were the soap operas and criminal dramas Dzhvar Aprust (“Hard Life“), Hreshtakneri Dbrots (“School of Angels”), Generali Aghjiky (“General’s Daughter“), and Yezragtsic Ayn Koghm (“This Side of the Border”), as well as the programs Hertapah Mas and Sur Ankyun (“Sharp Angle“), which showcase accidents and police activity.

The show Dzhvar Aprust, for example, was watched by half a million people daily.

TV programs with the largest audience (2012)

If we exclude football matches from the Top 10 list (as they are not produced by the networks themselves, and football traditionally gathers a large number of Armenians around the screen, especially since the European Championship was last year), we find that the list continues to be comprised of programs built on our emotions, which revolve around the heart-rending details provided by police or the destinies of fictional (such as telenovelas) or real (specific) people. 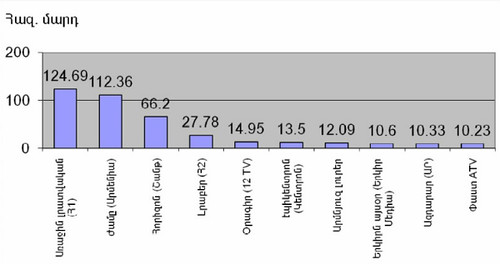 According to the Telemediacontrol ratings, the most watched news programs were those of H1 (the state broadcaster) and Armenia TV, both of which together had a larger audience than all the other channels. Arachin Lratvakan (“First News“) had 124,000 viewers; Zhamy (“The Hour”), 112,000.

In general, it seems, a significant piece of the ratings cake went to these two channels. This, however, has been subject to review this year, since the first sales house has begun operations in Armenia. In the opinion of the sales house director, there is a need for serious reforms in the television market.

There already have been structural changes. The Council of the Public TV and Radio Company of Armenia has a new president (new tactics are anticipated), and the channels Armenia TV, ATV, and ArmNews have come together under the umbrella of a media holding (again, new tactics are expected).