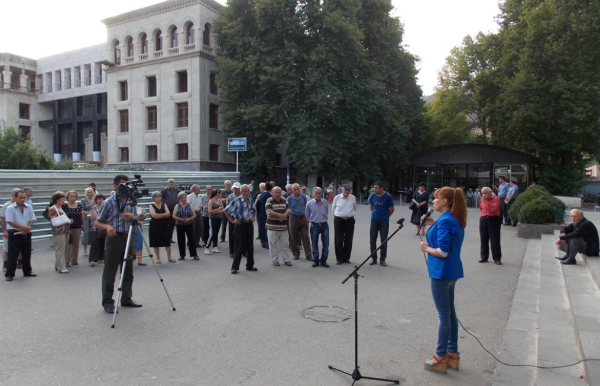 The National Assembly by-election in precinct 38, which includes the regions of Kapan and Meghri in the southern Armenian marz (province) of Syunik, will take place on Sept. 29. A by-election was called by the Central Electoral Commission after the previously elected candidate, MP Vahe Hakobyan, was appointed governor of Syunik.

All the candidates except for Vahram Hovhannisyan began campaigning on Sept. 1.

Their election rallies are covered only by the regional Sosi TV station. According to Sosi TV Director Vahe Sargsyan, in the run-up to the election they will provide a balanced approach, covering all the candidates’ campaigning activity.

“Paid airtime, for political ads, will also be provided on equal terms for the candidates. We have set the fee for one minute [of advertising] at 6,000 AMD [about $14.56 USD]. So far there are no applicants,” he says.

Kapan’s Khustup cable TV company is not covering the by-election and not broadcasting the election campaign meetings.

Khustup TV Director and Chief Editor Sasun Manukyan says they won’t be participating in this election.

The TV station had decided beforehand not to cover the election, and accordingly, had not set a price for political advertising.

“Taking into account our previous experience, we know that a precinct having 76 sections, 19 of which are within the scope of [television] coverage, doesn’t particularly attract candidates; that’s why we’ve refrained from participating in the electoral process,” he says.