Media Freedom in Armenia: Behind Molodova But Ahead of Ukraine [INFOGRAPHIC] 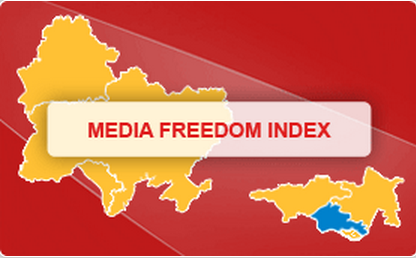 According to the findings of a study monitoring the level of media freedom in Eastern Partnership countries, Armenia, in both individual category and overall rankings, is in third place, after Georgia and Moldova.

“The fact that, in all indices, Armenia has made headway in the last year, we attribute to two main factors: first, the situation regarding court proceedings of defamation and libel cases has improved; and second, the work of broadcast media during the elections has been more acceptable; that is, that political parties have been able to present their programs on air during these past three major elections has left mostly a positive impression on all observers,” says Yerevan Press Club President Boris Navasardian.

The study, which examined media freedom in 6 countries (Armenia, Azerbaijan, Belarus, Georgia, Moldova, and Ukraine), was conducted between March and May 2013, by the Yerevan Press Club, Internews Ukraine, and other NGOs based in the Eastern Partnership (EaP) countries.

The aim of the program monitoring media freedom in EaP countries is to protect freedom of speech and expression in these countries, raising awareness of the current situation of the rights of journalists and the freedom of news outlets working in the region.

“To get the rating, media experts (journalists and advocates) responded to such questions as, for example, ‘To what extent is the opposition represented in national news outlets? To what extent are news outlets free to disclose matters regarding state officials’ possessions? Does independent public television exist in the country? How widespread is pressure on private television stations? Is there a state monopoly in the provision of internet services sector?’ and so on, evaluating these with a score of 0 to 3,” says Yerevan Press Club expert Mikayel Zolyan.

The program is set to continue for 2 years, during which time quarterly reports will be released.