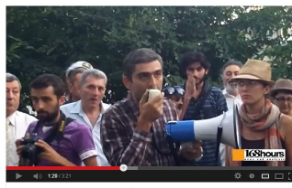 During the open discussion at Mashtots Park on July 31, members of the “I won’t pay 150 drams” movement called on some members of the media to leave the park and not to cover their gathering, reasoning that those TV channels didn’t cover their activities in the past.

That day, Public Council chair Vazgen Manukyan had visited the activists who are protesting against corrupt city officials and the increase in public transport fares — news that many TV stations deemed important and worthy of coverage. But the activists, on the contrary, considered the move as being improper coverage of their activities. “You’ve come here to stage a show, to do what?” they said to the reporters, playing on a popular Armenian meme and urging Shant TV, Armenia TV and Public TV of Armenia to leave the park.

This incident in a public space launched various questions, the primary of which is attainability of information for the media.

President of Gyumri’s Asparez Journalists’ Club Levon Barseghyan believes that the activists’ extreme statement was not so much a scrupulously prepared move as an emotional outburst.

“The demonstrators didn’t allow a few TV stations to film and to record interviews, suspecting that those channels will turn their demonstrations into a show [a performance] and will distort their remarks. And so, an attempt was made to ‘punish’ those news outlets whose work they are displeased with. Of course that discontent did not newly arise; for 20 years we’ve seen how the [TV] channels stage performances, but I’m sure that the problem won’t be settled with such ‘sanctions’ and a journalist’s work won’t become more professional,” he says.

He considers that this move by the activists is meaningless in the long term.

“Allowing one news outlet’s entry into the park while dismissing another’s is injustice. Every journalist is doing his or her job; how [s/he’s doing it] is another matter (poorly, well, or upon orders),” says Barseghyan.

Director of News and Analytical Programs at Public Television of Armenia Gevorg Altunyan considers that what happened at Mashtots Park was completely wrong.

“No one has the right to ban a news outlet’s work, regardless of whether she or he accepts that news outlet’s orientation, taste, style, or not. The freedom to work of news outlets is one of the key principles of democracy. And it would be good if both state agencies and the public realized that,” he says, assuredly.

He classifies boycotting undesirable news outlets with the aim of insuring against alleged misinformation among cliches that are long past.

“Even if some news outlet or another is your ideological enemy, it doesn’t cover incidents in a way that’s convenient and desirable for you, you can’t forbid it to work. You [simply] can’t and that’s it — especially when what is covered is happening in a public space. Public spaces are free; you don’t need a special invitation to enter,” says Altunyan.

Media expert Mesrop Harutyunyan is sure that restricting a journalist’s activity can’t be welcome, even if the journalist is a representative of a news outlet whose work is poor or unilateral.

“In general, any obstacle (no matter under what conditions or in what situation it occurs) to the work of the press is unacceptable for me,” he says.

Levon Barseghyan recalls that interfering with a journalist’s work is a criminally punishable act, Article 164 of the RA Criminal Code stipulates that hindrance to the legal professional activities of a journalist is a crime.

“Of course, I wouldn’t want this incident to set a precedent, with news outlets taking citizens to court under this article. All of us understand quite well that if they want, news outlets can ‘bulldoze’ citizens,” says Barseghyan.