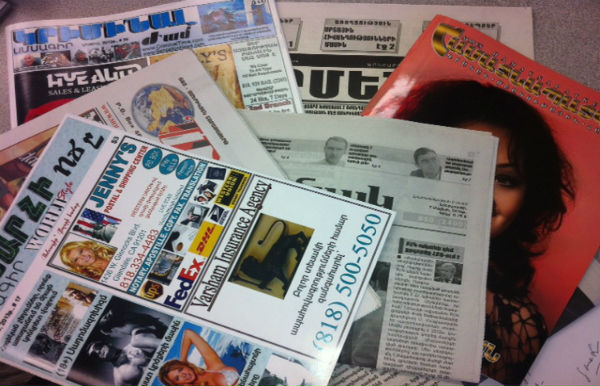 The existence of the press is one of the first signs of an organized community. From the robustness of the activity of newspapers published in the diaspora, for example, one can assume when Armenians immigrated to that country, and what their problems and achievements are.

The primary readers of Armenian-language newspapers are the elderly. That which local newspapers write and promise doesn’t interest the youth. In the best case scenario, they choose [to read the news on] the Internet.

After all, the main articles in Armenian-language newspapers in Los Angeles are those republished from Armenia-based news sites. It’s the lack of local news that becomes a problem and determines the newspapers’ quality. The press here simply proves the presence of Los Angeles’ Armenian community. It doesn’t convey the interests and opinions of the youth, how the diaspora thinks, and it doesn’t ensure dialogue with the homeland.

Published are two dailies [Asbarez and Nor Hayastan (“New Armenia”)], 5 weeklies [Massis, Nor Kyanq (“New Life”), Nor Or (“New Day”), Molorak (“Planet”), and Hay Kyanq (“Armenian Life”)] and one biweekly paper (Armenia), which publishes only classifieds: job announcements, houses for rent, and so on. (A pattern is evident in the names of the papers: either “new” or “life” or Armenia are in the title, from which the Diaspora’s dream can be assumed.)

Copies of these publications can be found in nearly all Armenian establishments. From April bookstore manager Arno Yeritsyan, I found out that the store sells at most 20 copies of each paper weekly: some are purchased by subscribers, while others are distributed free of charge. Arno stressed that a significant portion of the print run, requested by relatives, are sent to prisons.

Three newspapers express the view and support of political parties in the City of Los Angeles.

Massis Weekly is the official newspaper of the Social Democrat Hunchakian Party of the Western Region of the US. Published since 1980, it covers important news of the week — from Armenia, as well as local and international news. Editor Arshag Kazanjian informed me that only the printer is paid — everyone else donates their time. He says: “Our press is necessary. The important task is preservation of our Armenian-ness and strengthening our connection to the homeland.” Kazanjian compares print press and the Armenian script with a guest whose visit is always welcomed in homes. He considers Eastern and Western Armenian as the wealth of the language — but only with the classical (or Mashtotsian) orthography.

[[wysiwyg_imageupload:491:]]Nor Or (“New Day”) is the official publication of the Armenian Democratic Liberal Party (Ramgavar) of the Western Region of the US. It was founded in 1922 in Fresno. The editorial office selects and publishes the news and comments of the past week that received the most reactions from politics (and political figures). The biggest issue for editor Hakob Martirosyan is the gradual decline of readers. “We will publish the newspaper as long as there is even one reader. We have only two generations who read Armenian — we and our fathers.”

In order to attract the youth, the newspaper began publishing an English version last year. “In the 50s, the community here had forgotten Armenian; it is only due to new immigrants that our language was revived — if there’s no fresh impetus, our generations will become assimilated and disappear,” he says.

Asbarez is the official publication of the Armenian Revolutionary Federation (Dashnaktsutyun) of the Western United States. It’s a daily newspaper, published since 1908. It has a professional editorial team and is the most consistent in covering community news, considering that to be how the connection to the homeland is strengthened, and becomes meaningful and effective.

The community’s other newspapers are published upon individual initiatives and are considered independent. All the publications work with the scarcest resources and a small staff — without journalists. Articles are republished from Armenia newspapers and translated from the foreign press. When a newspaper is struggling to survive, its quality is no longer a priority.

The founder/editor/journalist/organizer really has to have great strength and patience to visit various small and major entrepreneurs, to procure a few lines (or a few words) of advertising; to grab an interview on the way and write an article.

When necessary, columns from newspapers published in Armenia are cut with a pair of scissors, stuck on a piece of paper, photocopied and published in the paper. This also happens.

As a result, we have republished articles on outworn topics, comments plucked from the Armenian press, which can be read online.

If the community was informed and well-organized, Armenian entrepreneurs would supply their newspapers with advertising, while a journalist’s well-paying work would become attractive for professionals. However, entrepreneurs in the Armenian community don’t place importance on investing in ads for newspapers with low circulation. And the circle continues: advertising, quality, readers — all decline. And a solution to the problem can’t be found.

“All the newspapers have the possibility of being shut down. A newspaper isn’t a business transaction but a mission. Even in the case of a sufficient print run it’s not lucrative. Only by working on the side and using its income just to support the paper is it possible to maintain a newspaper,” says Hay Kyanq editor Apo Jabaryan.

Since 1987, Berj Der-Sahakian has been working at Berj bookstore, which he founded. After praising my enthusiasm for newspapers, he said, “I don’t think newspapers have a long life — five years later, we’ll completely migrate online. Only two bookstores remain in Yerevan; here we have three. I’ll work five more years, then I’ll close my bookstore.”

Publications in the diaspora have another important mission — language. The print press reacts the fastest to any changes in language.

In the diaspora, there hasn’t been a linguistic academy or an establishment training language experts — individuals have fulfilled that role. Former Asbarez editor Vatche Brutian lists names with whose scrupulous and competent work the newspaper has become also a school. “Shavarsh Miasakyan, who was the editor of Haraj newspaper in Paris, Beniamin Tashian, the publisher of Husaber in Egypt, Minas Teoleolian at Hayreniq, Poghos Senapian and Sargis Zeytlian at Azdak… They were devoted to the educated development of the language, recognizing the importance of keeping the language pure and flawless. If there was a question about verifying spelling, people first called the editorial office.”

Orthography used in Armenia (also known as reformed Armenian orthography) here is considered a linguistic policy imposed on the Armenian people during the Soviet era, which aimed to separate Armenia from the diaspora. The number of supporters of Mashtotsian orthography in the diaspora is great. In many Armenian schools too if they teach Eastern Armenia, they do so with the classical (Mashtotsian) orthography.

Until the 1970s, there was no Armenian day school in the US. Now there are 4,000 children going to Armenian school in Los Angeles, while Armenians make up 68% of the children in American public schools. The handbook or manual providing proper Armenian to them and support to teachers has almost always been the newspaper.

But this is no longer the case. Los Angeles has become a crater of Armenian linguistic branches, added to which has been the “new Armenian” developed by youth going to English-language school — the mix of Armenian branches heard in the environment pronounced with an English accent. For newcomers, becoming skilled in English becomes important, while extra effort is needed to preserve the Armenian, the responsibility of which also lies with newspapers. In Los Angeles, Armenians forget Armenian and Russian and don’t quite learn English. Among us, this is a well-known joke, which is also true, as are all jokes.

It is in this environment that the Armenian press lives, the criticism of which can be relentless. It is worth rightfully judging unprofessional work, shortcomings in the language, the frivolous attitude, and the lack of local news. There can also be praise for the devoted [readers] and business sponsors, who have not yet lost hope and continue to support and develop the press, if only for the importance of having Armenian script on the table.

The diaspora also asks more questions than it gives answers. How to save the Armenian press in the diaspora? How to support the culture, to be sensitive toward and educated about the language?

Missing is the search for a policy giving life to newspapers, which is much needed today; otherwise, newspaper readers will remain our elderly, not knowing English and living with news from Armenia.

Update July 25, 2013, at 11:00 pm AMT (UTC +4): Though according to the Massis Weekly website, the newspaper has been published since 1981, in an interview with the author, the editor said the weekly paper has been published since 1980. The article was changed to reflect the date according to the editor. Also, the spelling of some names were changed to reflect the transliteration from the Armenian as per those cited.