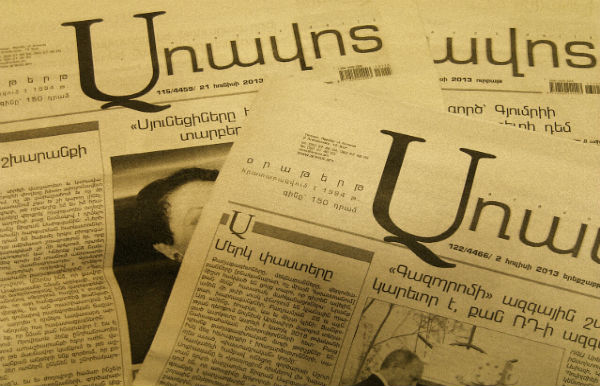 Local newspaper Aravot (“morning”) expressed regret for its Jun. 26 article titled “Scandal over Armenian PM’s ‘Offshore Businesses’ Attracts Huge Investments” [English translation as per the link], which refers to one of the most discussed subjects in Armenia in the last month — media reports published by Hetq Online on RA Prime Minister Tigran Sargsyan’s offshore businesses in Cyprus.

Aravot retracted the story in today’s print issue, but removed it from the website the same day it originally appeared in print. The paper said the story doesn’t correspond to its professional and ethical code, according to which Aravot journalists strive to ensure accuracy and comprehensiveness in their news stories, exhausting all avenues to verify the news from at least two sources.

“And what’s more unfortunate is that the news story might be mistakenly perceived as being addressed to our colleagues at the Investigative Journalists NGO. Aravot expresses regret for what happened. The organization has followed up and those who violated the code of conduct have been punished,” reads the retraction. [Note, the Investigative Journalists NGO is the publisher of Hetq Online.]

“My eyes really missed that story; otherwise I would never publish it because it was not reliable, not verified. We removed that story from [our] website. No one was asking me for a retraction. I printed [the retraction] in the newspaper so that my colleague [Hetq Online Editor-in-Chief] Edik Baghdasaryan does not doubt that it was a simple misunderstanding,” says Aravot‘s chief editor, Aram Abrahamyan.

On Jun. 27, Abrahamyan, in his editorial [AM], refuted the news published in the paper’s previous issue, considering it ridiculous, and offensive to Hetq.

Media expert Mesrop Harutyunyan finds that this type of conduct should become the norm for not only news outlets, but also politicians.

“Apologizing and admitting that the published piece didn’t correspond to their adopted code of conduct is a welcoming move by a news outlet, which is is guided by the principles of ethics. And in general, admitting one’s own mistakes, voicing them, and apologizing [for them] shouldn’t be strange and surprising but rather normal behavior,” he says.

According to Abrahamyan, the journalist who violated the code of ethics and professional conduct has been fined.