“I’m Not a Newspaper Anymore”: PechaKucha in Yerevan 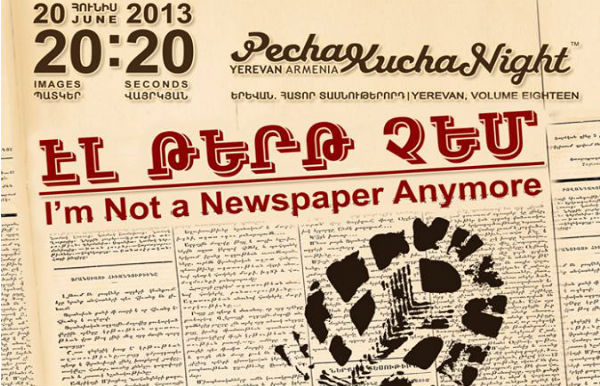 PechaKucha is a presentation format based on a simple idea: each speaker presents 20 slides with each slide lasting 20 seconds. This was the second time PechaKucha Night on the topic of media was held in Yerevan — the first took place in 2011 and was called “I Am a Newspaper“.

This year’s theme was “I’m Not a Newspaper Anymore”. The presentation topics varied from media literacy to the deep web to local news websites of unknown origin.

“It was very interesting to hear topical presentations that were different from one another but equally important. For me, especially interesting was the presentation phase, since you had to fit in the [assigned] format and be interesting for the audience,” she says.

Deputy Minister of Justice Aram Orbelian [AM] had prepared a presentation on the use of media as a means of communication for the state.

“Quite interesting were both the topic and the format, which limits the possibility of speaking at length and obliges you to provide information, illustrate, and explain a topic that might interest people in a very short timeframe,” he says.

Journalist Ani Hovhannisyan‘s presentation was about news websites that are anonymous, not tied to any address, and of unknown origin. Though the journalist considers the evening generally successful, she believes that presentations about pressing issues were absent.

“I would’ve liked, during PechaKucha, not for each person to come and present what she or he did, but more so for the overall problems in the media to be raised,” she says.

PechaKucha Nights have been organized in Yerevan since 2010, led by Vahe Balulyan, co-founder of the restaurant/cafe/tearoom The Club.

All of the presentations of “I’m Not a Newspaper Anymore” can be viewed here.