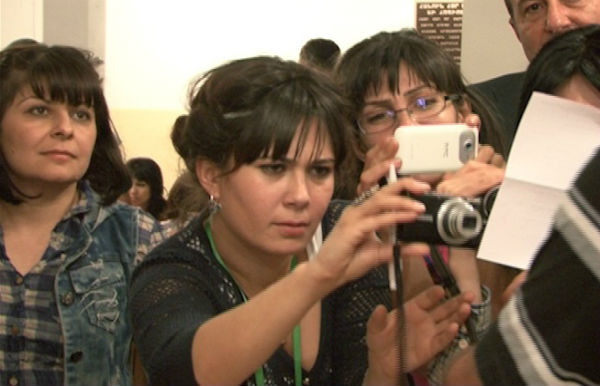 The Yerevan Press Club (YPC) monitored Armenian broadcast media coverage of the 2013 Yerevan Council of Elders election, recently publishing a report covering the first stage, that is, the pre-election period of Apr. 7 – May 3, 2013.

According to YPC’s findings, Armenian politicians’ lack of willingness to participate in televised or public debates or discussions continues to remain a problem, along with some broadcasters’ continued “undesirable practice” of using promotional video content prepared by political parties in their editorial coverage.

Several private TV stations, which are associated with particular political parties, to some extent implemented an agenda that corresponded with that party’s views.

Such a scenario in the local broadcast media industry limits the information capacity of political forces that do not have leverage over broadcasters, while guarantees of more or less balanced coverage (legislation and constant monitoring) exist only in the short periods of the official election campaign period.

How did the local media operate before, during, and after the Yerevan Council of Elders election? Editors respond and evaluate their news outlets’ work.

Just as with the entire election campaign, so too the electoral process [on election day] was not covered completely. Once again, that which happened during the presidential election was repeated: shown was that which was to be shown, and most importantly, there was no televised debate because one of the main actors in the debate completely refused to participate in any debate, and that’s why voters weren’t able to identify the grain of truth.

As for coverage of the voting, it’s better to be silent — there was no coverage. We only saw how Republic of Armenia officials voted, and actually we didn’t see how a Yerevan resident who’s accepted a bribe votes; it was covered simply as protocol.

When it’s the Yerevan Council of Elders election and absent from the airwaves is the issue of the Pak Shuka [“closed marketplace,” a historical and cultural landmark that has been gutted and is undergoing “renovation”] or Mashtots Park that has been on Yerevan residents’ radar for over a year and is a cause for long debates, and afterwards many of the TV stations declare themselves to be progressive, objective and of a global rank, then it’s better that I remain silent.

We deprived TV viewers of one very important thing: a televised debate. We were unable to present a report of the Council’s 4 years of work because for practically the entire election period that Council refused to come [on air], to present what it’s done and not done.

And if the TV station presented presented that, that is, if we sum up what we’ve shown over the past 4 years, all those problems, issues that exist in Yerevan, it would be completely perceived as anti-promotion. That’s why, obligingly, we didn’t report on the elections much and so didn’t have full coverage.

And on election day, you had to have hundreds of journalists to be able to give the real picture of what happened in Yerevan that day and the day before.

In my opinion, the media worked well during not only these, but also the past parliamentary and presidential elections; in any case, all political parties had the opportunity to present their ideas, programs, and positions to the public.

In the case of television, objectivity, balance, and proportion were relatively maintained, while in the case of some online news media outlets, there was clear bias; a certain ideological-promotional slant was clearly noticeable; and also in some cases of the print media there was bias, subjectivity; but overall, the entire news media industry worked quite well, quickly, and comprehensively.

It seems to me, we were able to do the best that was possible; that is, we were able to provide all political parties with airtime; coverage without any particular position, commentary, or treatment.

And in this sense, I think, assessments of our work by observers as well as by organizations conducting monitoring were sufficiently objective.

In this election, perhaps the greatest function was fulfilled by news outlets, which very quickly reacted to violations and other irregularities both inside and outside the polling stations. Actually, a large part of the assessments of the election process were based not so much on electoral commission members, proxies, or observers, as much as on media reports.

Naturally, this was possible, first and foremost, due to the work of online news media journalists. For example, on 168.am, after 8 pm [on election day] site visitors were able to watch live the entire process of counting ballots at the two questionable polling stations. I can confidently say that without the news media’s presence, the elections process might’ve been much worse.

I think, the main achievement was that all political parties had the opportunity to present their ideas and programs — that was good, definitely. What was bad was that, unfortunately, there were no debates, and mainly it was the ruling party candidate who avoided face-to-face meetings.

The given explanation was that the campaign headquarters’ strategy was as such, but I think that this [a debate] is not a wish, but an obligation. The ruling authorities [party], as well as the other political parties, are obliged to participate in a debate — it’s one of the ways of informing and reporting to the public. The worst thing is that we didn’t see such debates. I won’t praise our work. It’s not right to praise ourselves; that’s a thankless job.

I think, in terms of coverage, the Internet is the one that dictates — that is, online news media outlets, which are the main actors in the industry.

It can be said that in this as well as in past (presidential) elections, dominant in the news media were not television stations or newspapers, but news websites.

In this election, I saw a dangerous trend: our news media industry being corrupt. News outlets are already beginning to blatantly represent the interests of their financial backers, their sponsors.

Anyone, any official basically is able to distort the reality how he wants and present events in a different light. If this trend continues and becomes serious, it will have irrevocable consequences for the country.

I wouldn’t consider our work perfect because my media opportunities were limited in that sense; we didn’t have sufficient resources to cover all the administrative areas, to have at least one journalist in each [of those administrative districts of Yerevan]. I think, I tried my utmost to be unbiased and present the reality.