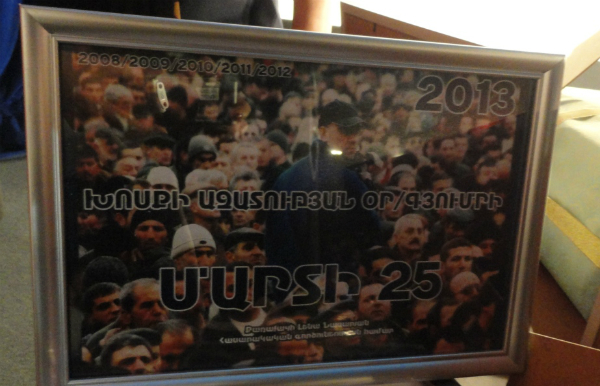 For five years, Armenia’s second-largest city, Gyumri, has been marking Freedom of Speech Day. As a holiday, it is not registered by the state and is not officially celebrated in the country.

The initiative to mark Mar. 25 as Freedom of Speech Day was taken by chair of the Gyumri-based Asparez Journalists’ Club Levon Barseghyan, and the occasion was the movement that was born in March 2008. Five years ago, thanks to financial contributions from individuals both within and outside Armenia, Gyumri’s GALA TV was saved from being shut down by the authorities. March 25 proved that, if necessary, the news media community and the public could unite (for a common cause).

In the past four years, a dozen journalists and news outlets have received awards annually for their work. “The important thing is that it became established as a holiday and is turning into tradition. It’s good that 5 years ago the people beat the regime and created this day,” says media expert Mesrop Harutyunyan.

“It’s important that we have an example, when a movement protecting journalists, and especially in this case news outlets, ends in victory. What’s important is that any journalist or news outlet is confident that at any moment it will get the support [it needs],” says Committee to Protect Freedom of Expression President Ashot Melikyan.

This year,  journalist Zaruhi Mejlumyan was given a prize for her coverage of legal affairs and particularly of the issues of prisoners convicted to life.

Also awarded was Hetq journalist Grisha Balasanyan, for investigative journalism and especially for his series of reports on official statements accompanied by analyses.

PanArmenian.net’s photo department was also among the list of award recipients, for the best photo stories.

Also awarded was a member of the public, Lena Nazaryan, for her active participation in several civic initiatives, as well as architecture historian Samvel Karapetyan for speaking publicly about pressing issues.

For one year of working effectively, Shirak Center NGO received an award. Also given an award on the five-year anniversary of the day was Asparez Journalists’ Club chair Levon Barseghyan.

In the opinion of Seyran Martirosyan, head of the Shirak regional branch of the A.D. Sakharov Armenian Human Rights Center, this commemoration day spawned rom real life, when five years ago, freedom of speech in Armenia was subject to trial.

“The day is turning into a tradition, which, in my opinion, becoming a unique instrument, a means of keeping society healthy,” he says.