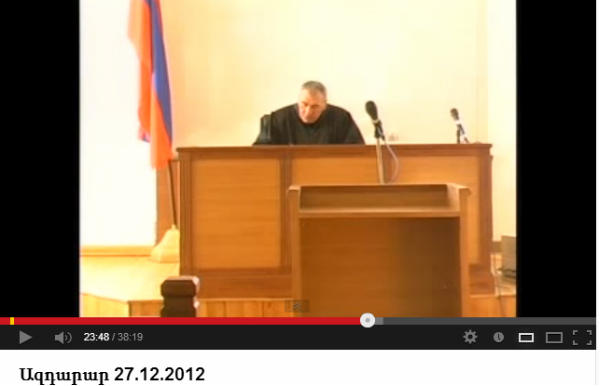 Gyumri citizen Harutyun Sargsyan, who is charged with the murder of the fiancé of the daughter of Gyumri’s former mayor and with engaging in illegal business activities, has sued Tsayg TV station.

Sargsyan claims that the TV station in the Dec. 27, 2012 broadcast of its Azdarar news program made several libellous statements that harmed his good business reputation, adding that Tsayg TV intentionally attempted to create a negative impression of him, making unjust statements on air.

The plaintiff, in particular, claimed that the statement “Harutyun Sargsyan in the vicinity of the Mother Armenia statue violently murdered the former mayor of Gyumri’s daughter’s fiancé Karen Yesayan,” by calling him a murderer, first of all violates Article 21 of Armenia’s Constitution, which states “Anyone charged with a criminal offence shall be presumed innocent until proved guilty by the court judgment lawfully entered into force as prescribed by law.”

The sensational murder occurred on Apr. 12, 2012. That day, at 3 pm, the engagement ceremony of Vardan Ghukasyan’s daughter, Manya Ghukasyan, and Karen Yesayan, originally from Gyumri but who had moved to the US in 2009, was to have taken place. Yesayan went missing when he went to get the car from the carwash station that morning. He was found dead around 7 pm that same day near the Mother Armenia statue, murdered with a single gunshot. Harutyun Sargsyan, son of the former police chief of the Ani region, was arrested on suspicion of the murder.

The first court session, set for Dec. 27, 2012, was postponed to Jan. 15, 2013. The news made its way to Tsayg TV and on its website. Sargsyan and his family members were indignant with the words “violently murdered” uttered on television.

On Dec. 27, the Sargsyan family called Tsayg TV, demanding the station either correct or retract the news.

According to Azdarar news program director Nara Melkonyan, the news on the Tsayg.am website was edited on Dec. 31, 2012 to read that the description “violently murdered” does not correspond with the views and opinions of Tsayg TV but was taken from a Sept. 5, 2012 letter issued to the country’s president by Karen Yesayan’s parent’s. The TV station was unable to make the correction sooner because Dec. 29 was Azdarar’s holiday broadcast, after which no news was broadcast as the holiday period had begun. Though news wasn’t being broadcast on the TV channel, the Tsayg website was being updated which is why the explanation had made its way there.

The plaintiff, however, insists that the TV station should’ve been able to clearly separate what was official information and what was personal opinion. According to him, if the news outlet sees no ill intention in its actions then at least in using the term “violently murdered” it should’ve cited the source.

Tsayg TV, on the other hand, doesn’t accept the lawsuit brought against it, considering it unfounded. In objections sent to the court and the plaintiff, the TV station notes that its news division gathers and covers the news and does so objectively, without bias, and comprehensively, without representing anyone’s interests. The case heard in the Shirak District Court of First Instance was controversial and of public interest, and naturally, the news outlet was going to cover it.

The defendant (in this case, Tsayg TV) in its objection notes that the plaintiff doesn’t distinguish which part of the offensive statement he considers defamation and which he considers to be insult (as these are judged separately). Tsayg TV sees neither insult nor defamation in the statement. Furthermore, the defendant insists, the expression should’ve been viewed in the overall context, yet the plaintiff has separated it from the overall text.

“For the information to be deemed defamatory it shouldn’t correspond to the truth; that is, it should be a lie, unfounded, and unreliable,” reads the objection the TV station sent to the court. “In fact, at present, the circumstances are such that the individual is charged with RA Criminal Code Article 104 for committing intentional murder.

“Our news outlet cited the Shirak District Court, as the body investigating the criminal case, and the other part of the news to the mother’s words. The TV station expressed the view of the mother of the deceased and later made a statement to that effect.”