Armenian Presidential Election 2013: Incidents of Threats and Violence Against Journalists 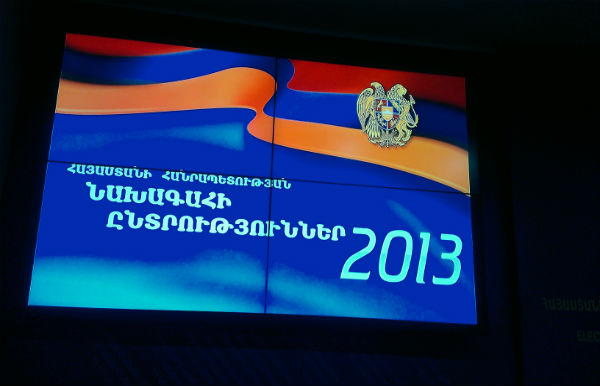 The professional activities of several journalists were obstructed while covering the 2013 presidential election in Armenia.

The Yerevan-based Committee to Protect Freedom of Expression has recorded several such cases, three of which were accompanied by physical assault.

Obstructed was the work of a representative of the Gyumri-based Asparez daily paper. The chair of Gyumri’s 35/39 precinct prohibited members of the press from closely observing and monitoring ballot allocation, the voter registration process, and whether voters were signing their names next to their actual names on the voter list as they received a ballot.

Furthermore, Journalists for Human Rights NGO journalist Artak Hambartsumyan was assaulted. 25–30 youth swarmed the 17/05 polling station, pushing election observers and the reporter to the wall and holding their hands so that they don’t photograph or video the ballot stuffing taking place.

Aravot.am and Asparez.am journalists in Gyumri were threatened that “their throats would be cut” if they attempted to video those threatening them.

In Erebuni, a few youth, seeing Aravot newspaper and Panorama.am journalists, locked the door to the Republican Party of Armenia’s central headquarters. When journalists knocked on the door, asking why the door is locked, one young man came out of the building, made inappropriate comments to the Aravot.am reporter, and tried to snatch her video camera.

According to Committee to Protect Freedom of Expression President Ashot Melikyan, this election was no different than previous elections in terms of violence against journalists and journalists’ professional activities being hindered.

“Usually these types of incidents go unpunished, but impunity creates new offenses. We ask the authorities and law enforcement bodies to take immediate measures so that these incidents are scrupulously and objectively investigated and the guilty are held accountable,” says Melikyan.