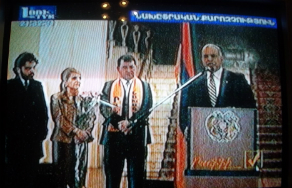 Only two of the four TV stations of Armenia’s third-largest city, Vanadzor, offer paid and unpaid airtime to candidates of the upcoming presidential election in Armenia — Lori TV and Fortuna. The other two stations, Mig TV and Channel 9, have opted out of this service.

“We don’t provide any type of airtime to candidates or their campaign staff,” says Channel 9 Director Lilya Abrahamyan, adding that Channel 9 has never done so in national elections.

“There’s simply no desire to,” she says. “By not participating, we maintain objectivity.”

“We don’t participate by offering airtime [to candidates] — it’s not expedient. To be honest, it’s quite inconvenient and difficult,” says Mig TV Director Samvel Harutyunyan, not explaining the difficulties to which he’s referring.

Fortuna, however, which has a broadcasting license in Lori province, as required, declared its fee of one minute of political advertising — 3750 AMD (a little over $9 USD). But Fortuna Director Karen Arshakyan says no presidential candidate has yet opted to advertise with them.

“The TV station’s mission is not only airing political ads or paid election campaign programs, but also in the first place, covering the candidates in news programs,” says the TV station’s director, Narine Avetisyan.