Horizon Armenian TV in US Under Threat of Closure 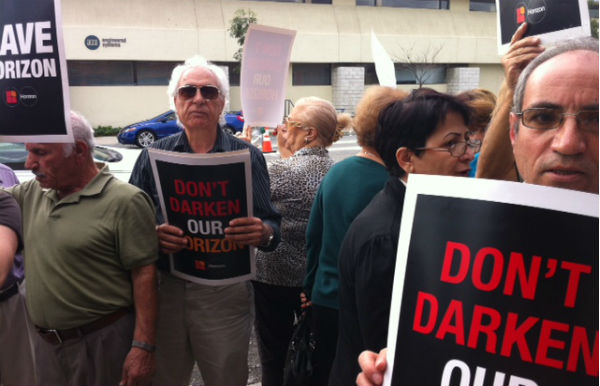 Hundreds of Horizon Armenian TV viewers and supporters on Feb. 1 and 2 gathered outside the Charter Communications offices in Glendale, CA, to protest the cable company’s decision to pull Horizon off the air on Feb. 19.

For 14 years, Horizon TV has been working together with Charter Communications, and so the news of its closure was unexpected — there were no grounds for this. Horizon TV’s annual contract with the cable company was renewed only one month before and all payments were made on time.

Without reaching a final agreement with Horizon, Channel Communications in the monthly bill sent to all subscribers informed them that there will be no more broadcasts of Horizon TV beginning on Feb. 19. Instead, the Armenian TV program will be replaced with the New Wave Armenian TV channel.

[[wysiwyg_imageupload:427:]]Protesting were Horizon TV’s audience members gathered over 20 years since its inception. For several weeks, viewers were calling Charter Communications’ Glendale office, demanding an explanation. Some said they’d pull their subscription from the day Horizon TV goes off the air.

An online petition was launched as one way of reversing this decision and saving Horizon TV. The petition collected 3,000 signatures and on the day of the protest was delivered to Charter Communications’ management. But no one from the company came out to speak with protestors and filming inside the office was prohibited.

Charter Communications, in terms of revenues, is the fourth-largest cable operator in the United States, providing cable television, high-speed internet, and telephone services. A significant part of the population in its coverage area is Armenian. Armenians make up 40% of the total population in Glendale and La Crescenta and 35% of the total population in Burbank. Charter Communications gets its revenue from not only TV companies (for broadcasting), but also individual customers (for viewing).

There is no other cable company in Glendale, La Crescenta, or Burbank — Charter Communications has the monopoly in this area — which makes such arbitrary decisions possible.

According to the US Bill of Rights, decisions that restrict freedom of the press, freedom of speech, and freedom of expression are prohibited. In the opinion of many, Charter Communications’ decision violates this bill, which is seen as an attempt to restrict and silence the voice of the Armenian community (since the decision affects a geographical area where nearly half the population is Armenian).

There’s one other premise of why Horizon is being pulled from the air, and it has to do with advertising and economic interests. Horizon TV’s new contract shows a 20% increase in its monthly fee to the cable company, which will have a direct effect on not only the TV company, but also advertisers.

In the opinion of some Armenian-Americans, this is one way of overseeing the Armenian community. Municipal authorities, considering the high number of Armenian residents, perhaps are noticing a certain locus of control and are taking precautions, while others say that the Armenian community is not united enough to make use of its power.

A statement issued by the Save Horizon TV Task Force urges community organizations, leaders, and businesses to be united in expressing their complaint and anger at the arbitrary decision.

The task force has sought legal counsel and might pursue legal action. The online petition is still underway, and another protest demonstration is planned for Feb. 8 outside Charter Communications’ regional headquarters in Irwindale.

These days community organizations are following developments with skepticism and caution — there’s a large portion of viewers who are indifferent. Furthermore, it was expected that apart from Horizon TV, eight Armenian TV stations that work with Charter Communications would also react to the decision. Seeking clarification for the unfair treatment toward one of their colleagues would’ve been considered the right approach.

However, dishonest competition, the greed of gathering customers, and the perception of television as a business became more important. When there’s one less competitor, several Armenian TV stations rush to celebrate victory.

[[wysiwyg_imageupload:426:]]Whether it’s a coincidence or not, it’s been several weeks now that USArmenia TV is busy with preparations for a celebration on Feb. 23 — and there’s no mention of what the TV station is celebrating.

One other unpleasant coincidence: By pulling Horizon TV from the air on Feb. 19 and announcing the launch of New Wave TV on the same day, Charter Communications makes room for contradictory speculations and places the two Armenian TV stations in opposing camps.

New Wave TV founder and General Manager Ara Ghazarian states that months ago he applied and received authorization to launch a channel, but he only learned of Horizon TV’s closure a few days ago, along with everyone else. He asked (or demanded) that no attempts be made to tarnish his name, assuring that such attempts will not be left unanswered.

Though I believe that Charter Communications has already made such an attempt by linking Horizon TV’s closure with the launch of a new TV channel.