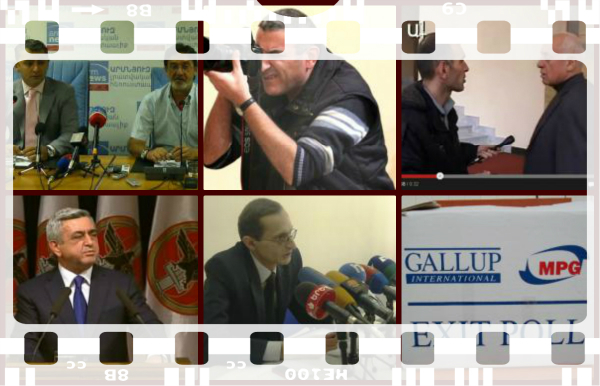 Media.am summarizes important events in Armenia in 2012 that made it into the news.

In early 2012, Haykakan Zhamanak (“Armenian Times”) journalist Hayk Gevorgyan was arrested and charged with “breaching the rules of traffic and operation of transportation means, which negligently caused damage to human health”. According to police, the publisher of this prominent opposition newspaper was wanted for 10 consecutive days, though nearly every day he was at the newspaper’s editorial offices and even entered a government building without any issue. After being kept in police custody for 3 days, he was released.

Armenia’s parliamentary elections took place earlier this year. Playing an active role in the political process was not only traditional media (such as television), but also various online resources. There were also attempts to develop political journalism. The National Commission on TV and Radio and the Yerevan Press Club, monitoring television coverage of the pre-election period, deemed it “balanced and conscientious“.

During the elections, TV stations attempted to create their own sources of classifying information and commissioned exit polls. Two channels, Armenia TV and ArmNews, both owned by Panarmenian Media Holding, conducted separate sociological polls, which resulted in similar findings — heralding the ruling Republican Party of Armenia’s victory. Kentron TV, however, conducting its own exit poll, declared the Prosperous Armenia party as the winning political party. Though such an odd result might’ve bewildered audiences, it also solidified the channels’ political affiliations.

On May 6, Election Day, the Committee to Protect Freedom of Expression noted 4 cases of journalists’ activities being hindered, two of which involved physical assault. The most well-known of these was the case of RFE/RL Armenian service (Azatutyun) journalist Elina Chilingaryan, who nearly had her video camera seized and her memory device broken. Later, the police quashed the case, on the grounds of absence of corpus delicti.

A1+ News Broadcasts on ArmNews TV

Deprived of broadcasting rights since 2002, A1+ again appeared on air. Beginning on Sept. 10, the A1+ news program Ayb-Fe+ was broadcast five times a week (from Monday to Friday) on prime time (9 pm) on the ArmNews TV network.

Concerned organizations wanting to “clean the airwaves” from offensive sitcoms and aggressive crime shows this year took a stand, sending a letter to the Armenian president. The Public Council also held hearings on developing TV standards. Discussions and debates on “harmless” television programming are at times heated and current, while at other times they simply disappear off the radar. It’s possible this issue will continue to be raised in 2013.

At the 14th Republican Party of Armenia Convention, on the occasion of being nominated by his party to run in the upcoming presidential elections, Armenian President Serzh Sargsyan noted liberalization of the media as an important achievement. During his speech at his party’s convention, he said: “We rejected outright a malicious practice of using force against journalists, opened up the media and restored the right of TV channels to access the spectrum.” From these remarks we can assume that prior to this announcement, the news media was closed.

Members of Parliament and Journalists

At the end of the year the newsmakers became MPs Samvel Aleksanyan and Mher Sedrakyan, whose demeanor and manner of speaking was much discussed by the media. The presence of a video camera and journalists’ questions publicized the MPs’ thoughts — and their threats. Media became a magnifying glass that highlighted the need to “reform” individuals who are given a mandate to represent the public. In any case, one of the parliamentary deputies, Mher Sedrakyan, expressed regret at insulting the journalist (Mher Arshakyan). While another MP, Tigran Urikhanyan, is preparing to take a blogger to court for photoshopping his face on a female model’s body.