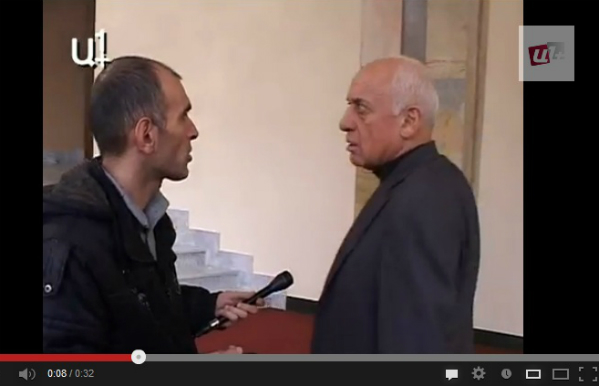 When the A1+ news team approached the MP, the latter, without even listening to the question he was asked, exclaimed, “Come on, get out of here! I’ll come break your jaw. Your ties have been broken; you let go of your reins” [said in a very vulgar way, using slang, and implying that journalists are feeling quite free these days and don’t hold back]. And when Arshakyan asked what the MP means by that, Sedrakyan added, “Iya….”

The member of the ruling party explained his fervent and harsh reaction by saying he was irate, since, according to him, he was simply standing in the parliamentary corridors talking comfortably, when the journalist “violated the confidentiality” of his conversation and approached him with a microphone.

The demeanor and manner of speaking of representatives of the public sector (and not only MPs, but also journalists) in public spaces often makes headlines in the news, as well as being discussed from an ethics point of view. In any case, neither Mher Arshakyan nor Mher Sedrakyan have ruled out the possibility of appealing to the Ethics Committee of the National Assembly regarding this incident.

Later in the day it became known that 40 Armenian journalists had sent a letter to National Assembly President Hovik Abrahamyan, asking him to bring into line those MPs who act inappropriately when dealing with journalists.

“Take as an example the latest fresh incident, when Republican faction MP Mher Sedrakyan […] made improper remarks to A1+ journalist Mher Arshakyan. Please bring in line Mher Sedrakyan, as well as [fellow Republican faction MP] Samvel Aleksanyan, who allow themselves to speak to journalists working in the parliament using disrespectful [i.e. patronizing and condescending] expressions — ‘dear sister, darling,’ and so on,” reads the letter, in part.

Members of the Facebook group “Journalists’ letter–demand to Hovik Abrahamyan” are also asking the MP to apologize to the journalist.