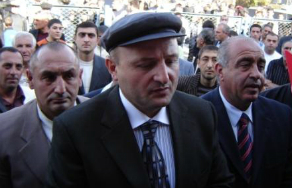 Vardan Ghukasyan, the former mayor of Armenia’s second-largest city, Gyumri, in recent years had become one of the media’s “darlings”. “I know that I’m your joy; you’d die if you didn’t write something about me every day; your days would pass by sadly,” he said on one occasion, when journalists of nationwide newspapers tried to bombard him with questions to get a witty response from the “decent Gyumrarian.”

Live broadcasts including Ghukasyan were among Gyumri residents’ favorite talk shows. The former mayor’s on-air presence also ensured high ratings for the TV station that aired such broadcasts. Ten years ago, when you’d be hard-pressed to watch these broadcasts online, a viewer who missed not only the live broadcast of the then-mayor but also the following day’s repeat of the show would try to acquire the video-recording of the show from the TV station through his contacts.

Being aware of the former mayor’s explosive character, TV hosts tried to add fuel to the fire by asking provoking questions to make the show more interesting. Put in an awkward position then would be Ghukasyan’s press spokesperson Lilit Aghekyan, who in the days that followed would be forced to smooth over the omissions her boss made live on air.

While Ghukasyan was congenial with Yerevan-based news outlets and even after negative press coverage agreeing again to respond to the same journalist’s phone call, in the matter of local (Gyumri-based) news outlets, he made certain reservations. He never forgot a news outlet or journalist who offended or insulted him, of which his irreconcilable relations with GALA TV were vivid proof. As a result of the conflict between city hall and the news outlet, covering local issues for the TV station’s reporters became an ordeal.

After the court case of Hetq vs. Gyumri City Hall, appearing on Ghukasyan’s “black list” was this news outlet, as well as the reporter who wrote the investigative articles about the Drampyans, against whom the then-mayor didn’t keep himself from loudly saying that he was disgusted. That court case was the first during his mayorship — there was no precedent. The reporter had tried to get first a verbal then a written response from the former mayor to the questions concerning him. The written question was followed by a three-month silence, after which the news outlet pursued the matter in court.

Ghukasyan’s era had its positive and negative aspects for local news outlets — once a year, programs with the then mayor that twice turned into a “show,” in this or that TV station, an order for advertising, and financing for one or two programs. This was one of the measures to smooth the sharp edges of presenting local problems that Gyumri’s former mayor successfully applied.

While he was in office, only those news outlets who had never had a problem with him were invited to cover official meetings in city hall. For the former mayor, journalists were the “devil.” According to him, among them were simply good or bad devil’s offspring.

The change in Gyumri’s leadership also led to changes in the news media. Journalists who had never set foot in the newly constructed municipality building in October gathered for the first time in one place with the aim of covering news of local significance.

Current Gyumri mayor Samvel Balasanyan so far has not expressed any personal aversion or sympathy toward any news outlet. All representatives of the 10 local and Yerevan-based news outlets working in the city were invited to cover the first meeting of the Council of Elders on Nov. 22. And the meeting was broadcast online on the Asparez Journalists’ Club website.