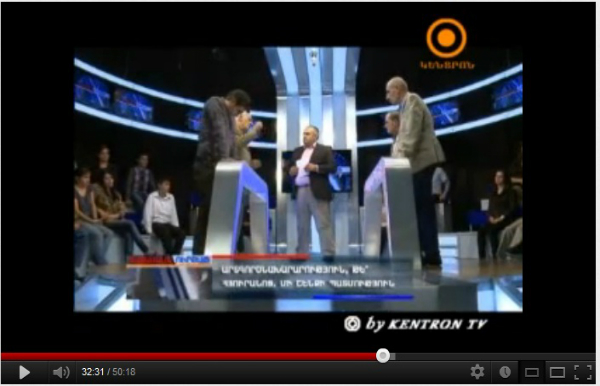 The Oct. 12 broadcast of Kentron TV’s Haykakan Urbat (“Armenian Friday”) program, which was dedicated to urban development issues and developments and distortions of Yerevan’s plan, became an opportunity to talk about humiliation and human dignity.

Architect Sarhat Petrosyan, a participant on the show, has asked the other participant, architect Levon Igityan, to publicly deny remarks he made during the program. Petrosyan claims that Igityan said on air “outright lies that are untrue and dishonor his dignity and good reputation”.

On Oct. 29, Petrosyan disseminated a statement on social networking and news websites, where he one-by-one points out those statements made by Igityan that disgrace his honor and discredit his professional reputation. Igityan, in particular, said that they wanted to dismiss Petrosyan from the university as his grades were poor and recalled Petrosyan’s article, which focused on the charge against RA Chief Architect for laundering state funds. Petrosyan denies the existence of the article and is demanding proof or a denial of these statements from his fellow program participant.

According to Petrosyan, the retraction should be published in the same or other mass media outlet; for example, in a daily newspaper that has an online version and a print run of at least 1,500 copies per issue. Otherwise, the architect is prepared to take the matter to court.

Rarely does a statement made in the media become the subject of a Republic of Armenia citizen’s dignity and public defamation. Usually, the targets of such accusations are the news outlets themselves, but this is different. Petrosyan notes that his complaint is directed not to the news outlet but to the person who uses the media to disseminate groundless information.

“I’m quite determined, and I’m ready to go to court. The issue is that statements that are irresponsible, emotional, and biased are often made in the public sphere. I think, an insult made in the media has to be refuted in the media. I also understand that there hasn’t been such a precedent in Armenia, and a person hasn’t taken another person to court for statements made in the media. I think, we have to learn to bear responsibility for our own words. We all learn,” he says.

Haykakan Urbat producer and host Petros Ghazaryan, commenting on the incident, says: “I think that in Armenia the value of speech has inexpressibly fallen; this is particularly felt in news media. Any move aimed at raising and protecting the value of speech, I consider positive. It’s a different matter when people stand face-to-face and have the opportunity to speak their thoughts to each other’s face, and they have to respond to each other probably in that format. In any case, I consider Sarhat Petrosyan’s action normal; if a person feels insulted, he should demand a public retraction — also appeal to court, though in our country the judicial red-tape are many, and the insults stated during the program were not that terrible. In any case, I support increasing the weight of remarks made on air.”

Ghazaryan also notes that, as the moderator of the show who can deflect or the opposite, exacerbate the flow of the debate, he’s become convinced that

“There’s no culture of debate in Armenia; it’s very difficult to keep a debate on the topic on the agenda, to supervise tact, ethics. The host also can’t completely disengage from the situation — especially, since experience shows that the program becomes interesting when it becomes personal.”

It’s hard to say in the matter of using well-grounded arguments and the culture of speech in public debates what influence Sarhat Petrosyan’s statement will have (or perhaps won’t have). But it can become one of the instruments of measuring sense of self in the media, provoking citizens to move the resolution of issues that arise on television or in print media to a civilized space — the court room.