No News Outlets and No Working Journalists in Meghri 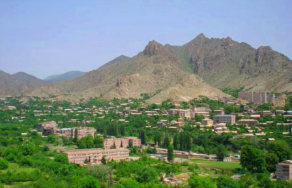 There are no local news outlets operating in the city of Meghri and nearby villages in the Armenian province of Syunik. Here there is no local newspaper, TV company or radio station. In Meghri, there are no working journalists or correspondents of news agencies, TV companies, print or online news outlets.

In this part of the province of Syunik, journalists are forced to gather information on breaking news by telephone — from different officials. Of course, sometimes individual journalists or groups of journalists visit Meghri, 376 km from Yerevan, and surrounding villages to write news stories about this southern region. Also news outlets operating in Kapan and Goris periodically visit Meghri.

Meghri residents keep abreast of news about the province of Syunik with the help of the Kapan-based Sosi TV station’s news program. They also read newspapers and follow online news media.

Meghri residents say that after they graduate, students from their city who have chosen journalism as their profession don’t return to Meghri from Yerevan, which is why the field of journalism in Meghri is “passive,” and it can be said that there are no journalists operating locally.

At the village of Lehvaz not too far from Meghri, I was introduced to 53-year-old Nerses Aghabekyan, who was previously a journalist and worked at the Meghri regional newspaper Arax. After the paper shut down, he stopped working in journalism. He worked in other industries (individual entrepreneurship, agriculture), but he confesses that during the entire time he continued to consider himself a journalist.

“It’s true: I haven’t written articles for quite a long time, but the creative streak has stayed within me, and if there are offers from news outlets, I am prepared to work for them. After all, I’m more informed of and better acquainted with local issues,” he says.

Nerses considers the hardest thing about returning to journalism work to be his lack of knowledge of digital technologies. In order to type articles on a computer, Nerses will be forced to get someone else’s assistance — at least in the beginning, till he can understand the language of computers and be able to master it, he says.