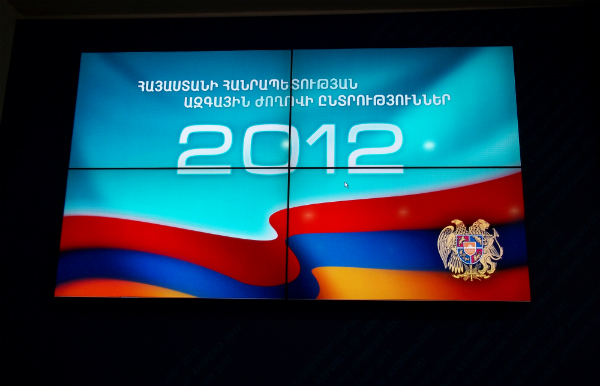 The Yerevan Press Club (YPC) recently published the findings of its monitoring of Armenian broadcast media coverage for the entire election campaign period (Apr. 8 to May 4) of the 2012 parliamentary elections.

According to these findings, the broadcasters included in the report for the most part provided balanced coverage of the political parties and alliance taking part in the election, providing the 8 parties and one party bloc with mostly equal conditions for introducing the electorate to their programs and views.

“This also doesn’t negate representatives of political parties. Probably for the first time in our country’s history there were no serious complaints related to coverage of the election campaign period,” says YPC President Boris Navasardian.

According to the report, the highest degree of interest to political parties was exhibited by ArmNews and Public Radio. The broadcast media with the most difference in terms of airtime allocated to parties was Kentron TV, where the Prosperous Armenia Party had the overwhelming advantage.

Also according to the report, the Republican Party of Armenia came out on top with the highest number of references and most amount of allocated airtime, followed by the Prosperous Armenia Party and the Armenian Revolutionary Federation (Dashnaktsutyun).

The Yerevan Press Club finds that there was great progress in the media’s activity — in contrast to political parties, which didn’t always inform the media of their election campaign events and sometimes avoided participating in programs involving political debates.

“Three political parties had the least amount of interest in participating in debates — the Republican Party of Armenia, Orinats Yerkir (Rule of Law), and the Armenian National Congress — and if we look at the figures, we will see that it’s these same political parties that received negative coverage because if you’re refusing to go on air, your opponent can go in your place and say bad things about you, which has a direct effect on results,” says Navasardian.

“The legislation issue of regulating political parties’ activities and political ads outside of election campaigning continues to remain insoluble. And the issue with the news media is that the political orientation of news outlets’ owners impacts the news outlet’s activities, which becomes a reason for polarized coverage,” he says.

Despite all the problems, the YPC president is convinced that the positive trends in the news outlets’ activities allowed Armenia in one year to become a leader in terms of political reforms among all the post-Soviet states (except for the Baltic countries).