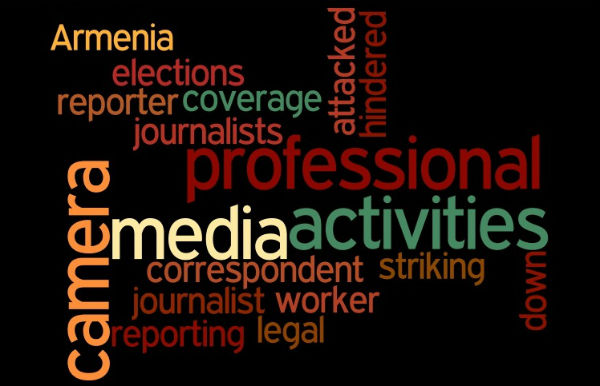 The professional activities of several journalists were hindered while covering Election Day. The Yerevan-based Committee to Protect Freedom of Expression noted four such cases, two of which involved physical violence.

Elina Chilingarian, a journalist with RFE/RL’s Armenian service (Azatutyun), nearly had her video camera seized and her memory device broken — in the process, her hand was hit twice. Varazdat Papikyan, a camera operator from Kentron TV, had his video camera seized, then he himself was taken away.

“Elina Chilingarian filed a police report; I don’t think there’s great difficulty in solving the case: there’s a clear photo of the young man who hit her both on the internet and in the journalist’s possession. We’re also going to follow the case of the Kentron TV camera operator, who apart from his activities being hindered was also basically kidnapped,” says Committee to Protect Freedom of Expression (CPFE) President Ashot Melikyan.

The professional activities of Nelly Babayan, a journalist with local daily Aravot, were also hindered: while she was filming one of the polling stations, one of the youth there snatched her phone, not permitting her to film.

“Apart from these three incidents, after 8 o’clock, we found out from [local news outlet] Hetq that at the 6/01 electoral district, the Central Elections Commission wasn’t allowing the journalist to film or audio record the vote counting and only after persistent requests were they finally allowed,” says Melikyan.

Nevertheless, the CPFE president finds that the number of cases of journalists’ activities being hindered decreased during these elections.

“If we compare [these elections] with the previous elections or even the last Yerevan Council of the Elders’ elections, there were fewer incidents of pressure [on the media] this time — even if violence is used against journalists sometimes, it of course casts a shadow on the election coverage,” says Melikyan.