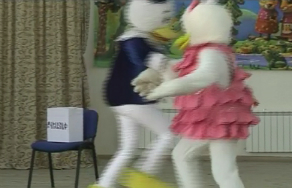 The Armenian National Center of the International Union of Puppeteers, Unima-Armenia, is using alternative media to disseminate information about the upcoming parliamentary elections. Unima-Armenia actors are touring the regions of Armenia with their “Happy Pre-Election Concert”.

The protagonists in the story — forest animals — are preparing for the elections. It’s hard to decide among the candidates: a boar, a wolf, a stork, and so on. Just as in the National Assembly of Armenia so too in the “parliament of the forest,” the race to become a member of parliament is lively. During the election campaign in the forest, the candidates are campaigning and many of the voters are subject to pressure. The rabbit, for example, works for the boar and is forced to vote for his preferred candidate. The frogs vote for the stork, while the sheep have been led to believe the wolf.

The script is written in such a way as to explain the procedure for participating in the elections and to uncover electoral violations and fraud and the fight against these. Unima-Armenia President Armen Safaryan believes that performance is the most effective and ideal way to bring awareness and information to people.

“The audience is focused — there’s no opportunity to change the channel or throw away or not read booklets or other printed material. During the performance, audience members of all ages respond to questions, are unwittingly focused, and take away sufficient information with them,” he says.

The Happy Pre-Election Concert is only one of such alternative media projects by Unima-Armenia. In the past, the puppet theatre troupe put on interactive educational performances for different schools around the country. This type of performance has helped disseminate information about not only the elections, but also gender equality and the rights of children.

This article was written based on an Apr. 28 broadcast of the TV series “Before Our Voting”.