New Online Tools and Platforms to Assist Voters in Armenia 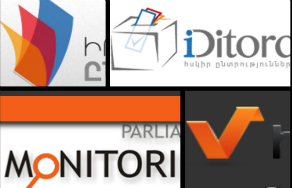 Voters in Armenia are keeping abreast of the 2012 parliamentary election with the assistance of not only traditional media, but also new online tools and websites. There are several new online platforms that offer complete election information of interest to voters.

It’s been about two weeks since iDitord.org, which uses crowdsourcing to map observed instances of election violations, launched. The iDitord project was developed based on the Ushahidi online mapping tool.

“If we get reports of violations from nearly 3,000–4,000 people, we’ll get a real picture of what’s happening during the elections; that is, we’ll compare all the official and unofficial general and alternative results with the picture produced by our site,” says iDitord.org coordinator Marine Manucharyan.

Reports sent to iDitord.org can be seen on the map of Armenia on the site. Violations related to campaigning ahead of the May 6 parliamentary election or on Election Day itself can be submitted to the site by entering details on the website, calling the hotline, sending an SMS to a dedicated number or tweeting using the hashtag #iditord.[[wysiwyg_imageupload:245:]]

Transparency International Anti-Corruption Center President Sona Ayvazyan says reflected on the map will be not only campaign and Election Day violations, but also post-election developments. “We hope that the site will be running also during the [2013] presidential election — we’ll improve the platform and be better prepared,” she says.

The website armelections.info, launched a week ago, offers comprehensive information about the elections. Here, one can find electoral laws, candidates’ lists, and operating hotlines. Hamazasp Danielyan, a monitoring and assessment expert with the International Foundation for Electoral Systems’ (IFES) Armenia branch, says they are still developing the project.

“Up and running soon will be the section ‘Find your party’ on the site, whereby a voter, responding to a few questions, can find which party’s position appeals to him and what they have in common,” says Hamazasp.

Another new platform, launched two days ago, is irazek.am, which is a project of the Journalists for the Future NGO.

Yet another website, parliamentmonitoring.am, specializes in monitoring activity in the National Assembly of Armenia. Mandate NGO launched the project in 2010, which is particularly known for its statistics section which reflects figures on such activities as which member of parliament voted the most, who was absent the most and who made the most speeches in parliament.  [[wysiwyg_imageupload:247:]]

The site was redesigned in February this year. Ahead of the parliamentary election, the site will summarize the results of the five parliamentary factions’ past five years of activities.

“Election campaigning has begun, and all political parties inform voters only of their good aspects, presenting very general figures and knowing that voters won’t delve too deep into them. And we, as observers, who have monitored their work over five years, will be offering alternative reports on what they’ve done,” says Mandate Director Lusine Vasilyan.

There will be a new page on parliamentmonitoring.am beginning next week, titled “Questions from Voters.” Website staff have collected questions from voters from different districts in Armenia so that they may direct them to parliamentary candidates. They will try to find out to what extent voters’ questions are reflected in campaign platforms.

“Of these questions, the most interesting and frequently asked will be edited and addressed to the five parliamentary factions, We will gather their responses and publish them on the site. Voters will be able to read the answers, leave an opinion, make an assessment, and also ask their questions,” says Vasilyan.

Following Election Day, the parliamentmonitoring.am team will summarize its work and prepare monitoring of the new parliament.

Note, all the above-mentioned online tools and sites are currently only available in Armenian.