No Shortage of Political Advertising in Syunyats Yerkir Regional Newspaper 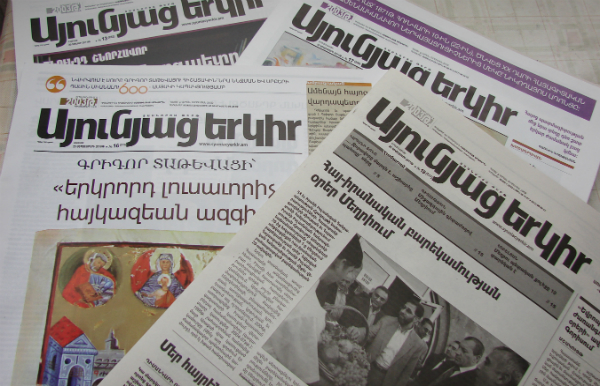 The regional newspaper Syunyats Yerkir will make room for political ads in its pages. Published since 2003, the paper has had political ads during all local and national elections.

Syunyats Yerkir has a print run of 2,000 copies and is distributed all over the southern Armenian province of Syunik. The editorial team plans to report on the entire process of the May 6 parliamentary election, beginning from candidates’ nominations to the end of the election period. At the start of the election period, chief editor Samvel Aleksanyan had said that all those political parties and election candidates who wish to do so can advertise in the paper.

Syunyats Yerkir covers not only the social, economic and cultural life of the province, but also all important political events. This isn’t the first time that the newspaper runs political ads —the editorial team acquired this practice from previous elections.

Advertorials or paid content, as per the paper’s terms, will be printed under the symbol “R”, but they may not coincide with the newspaper’s position. Until May 6, the paper staff will work according to an amended work schedule — that is, without days off.

Since there are already several requests for paid content and only so much time to print it, it’s possible that more than 2,000 copies of these papers will be printed — as much as the parties or candidates who’ve purchased the advertising would like.

The first issue of the newspaper with such paid content is already ready. But an important fact has to be taken into consideration: There will be political ads in Syunyats Yerkir, but the paper won’t be publishing smear campaign materials.