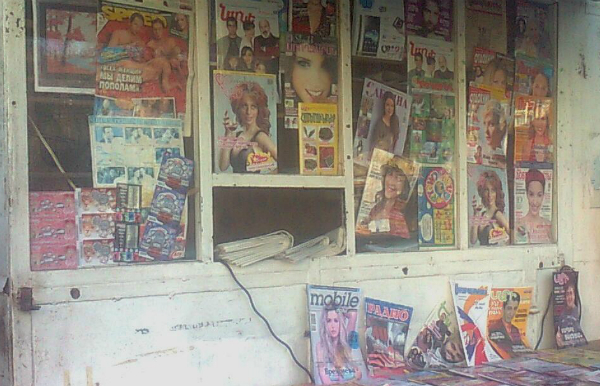 There are three newspaper kiosks in Kapan, with each one receiving barely 20 papers daily from Yerevan — a minimum of one to a maximum of six copies of each.

An employee at one of these newspaper stands, Tigran, has only six regular customers, all of whom are pensioners. In Tigran’s opinion, the oldest newspaper reader in Kapan is 86-year-old Volodya, who waits at the kiosk every time for the newspapers to be delivered from Yerevan.

One other pensioner, 72-year-old Edik Matevosyan, is used to reading papers in the morning. For more than 50 years, newspapers have been his main source of information.

Edik reads articles and news on different topics — both political and economic. “My favorite newspaper comes twice a week. I mainly read the papers Iravunq and Syunats Yerkir. All write the same thing but in different ways — very often you see false accusations in the pages of newspapers. It’s not pleasant particularly when you read articles discrediting the state leader — no one has the right to insult the president,” he says.

Newsstand owner Tigran says that the number of customers who buy newspapers has decreased triply in recent years. “The peak year was 2008, when people lived well and newspapers sold quite well. But today I’m working at a loss as many of the papers don’t get sold and I’m left with them. Right now I have a bundle of unsold newspapers valued at 40,000 drams [about $102] in the kiosk,” he says.

Tigran has noticed that newspapers usually sell well in the winter. In warmer weather, however, the number of readers drops.

“If before I used to receive 12 copies of Haykakan Jamanak and Chorrord Inqnishkhanutyun, now I order 6 copies [of each] as there are fewer readers. And I sell a few copies of the daily Aravot. Regional and football newspapers sell well,” he says.

Youth barely avail of the newspaper stand. For example, 28-year-old Kapan resident David reads the news online. Before going to work in the morning, he first visits his favorite news sites, catches up on the news and only then goes to his day job. Later, he sits in front of the computer in the evening and summarizes all the events of the day. Reading news online is gradually becoming more widespread than reading newspapers.