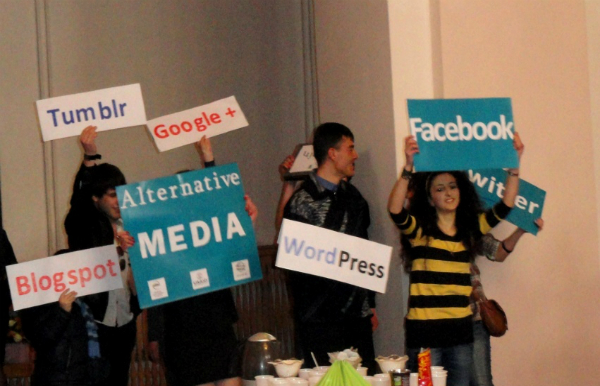 In Jan. 2009, we were celebrating the anniversary of the Gyumri-based Asparez Journalists’ Club, and on that day, Asparez President Levon Barseghyan declared that he decided to add one more holiday among those celebrated in the country. “I declare Mar. 25 Freedom of Speech Day,” he said. Seeing the surprised expressions on our faces, he explained: “If you remember, one year ago on that day, the amount necessary for GALA TV was collected and delivered to the RA Compulsory Enforcement Service of Judicial Acts. On that day, it could be said, we bought our free speech, and this is why I decided we would have a holiday and celebrate Mar. 25.”

Four years ago, more than 2,000 people participated in the fundraiser-telethon that began on Mar. 19. In the task of saving GALA through financial assistance, more than $90,000 was collected. More than half of this amount was donated by residents of Armenia’s second-largest city, Gyumri; a quarter was donated by residents of various regions in Armenia; and another quarter, from Diasporan Armenians. The Headquarters of Protecting Freedom of Speech and GALA TV, which was established in Oct. 2007, in its eight months of activity, disseminated more than 80 press releases, organized several pickets and one rally, heralding its victory by wrapping up with the telethon.

In previous years, a dozen journalists and news media outlets have been encouraged and given awards during the Freedom of Speech Day celebrations. The group organizing the award ceremony, reviewing more than 23 proposals submitted by 111 individuals and organizations, decided to bestow an award to Gyumri newsagent, war veteran Ara Hayrikyan, who in the past 15 years alone sold about a quarter of a million copies of newspapers.

Also praised was the work of civic activist Lala Aslikyan, who made the best use of opportunities for freedom of expression in several environmental groups and local civic group “The Army in Reality” to raise environmental issues and the matter of non-combat deaths in the army and who consistently voiced these issues in protests, marches and demonstrations.

Freedom of Speech Day in Gyumri also remembered Judge Ruben Apinyan of the Court of General Jurisdiction of Kentron and Nork-Marash Administrative Districts in Yerevan, who, working within the limits of the law, presided over libel and defamation lawsuits against local papers Iravunq and Yerkir and displayed a high level of professionalism, and being confronted for the first time with such cases against the press, rejected the former case completely and the latter case partially — basically for the first time applying all those standards that were later reflected in the RA Constitutional Court’s ruling.

Also praised was journalist and publicist Vahan Ishkhanyan, who, in 2004 and 2012, with his research and series of published reports exposed and introduced to the public the cultural layers of the Hemshin peoples of Abkhazia and northeastern Turkey.

And finally, Freedom of Speech Day in Gyumri praised the Committee to Protect Freedom of Expression (based in Yerevan), which in the past 9 years has consistently defended freedom of expression and the rights of journalists and mass media.

In the opinion of Nikol Pashinyan, chief editor of the local daily Haykakan Jamanak (“Armenian Times”), who was also present at the celebration, Freedom of Speech Day marked in Gyumri proves that not everything today is decided in Yerevan, by the authorities or by the system. There are things that citizens decide, and in Armenia, the more things citizens decide, the better. “In this sense, today is truly a celebration; it’s not a state holiday, but it’s a more of a holiday because it’s civic — people are celebrating their victory. This is citizens’ victory and the victory of freedom of speech,” he said.

Journalist Hakob Badalyan, who for various reasons was unable to attend the celebrations in past years, considered Mar. 25 symbolic. “We have calendar days dedicated to the press and to freedom of speech but it seems that those are purely professional holidays. I consider this day special because it symbolizes not only the work of the journalism industry, but also the participation of the people. That is, people went from being readers, TV viewers, consumers to doing a specific task [fundraising], and in this sense, this day is a day of freedom of speech and civic freedom, as I see it.”

As Gyumri resident Vazgen Karapetyan put it briefly: “The most important thing is free speech. If there’s no free speech, there’s nothing; that is, there won’t be freedom either. It’s a great achievement that this happened in Gyumri, so we haven’t yet lost our perceptions of freedom. Free speech is like a burning candle, which is raised to give better light. Free speech is like the truth, which has to be above so that all can see.”