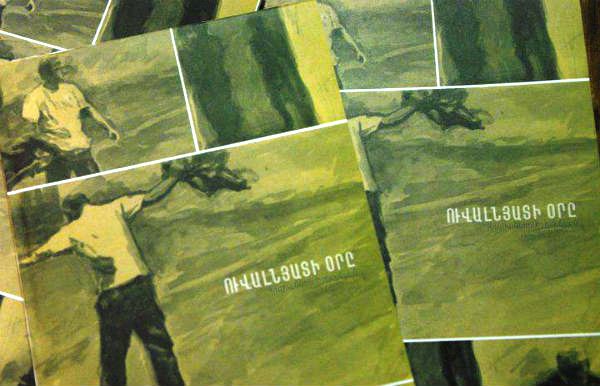 Armenia’s central police division is investigating a book by local author Hovhannes Ishkhanyan. While being questioned at the station, the author had the impression that the investigators find that the author’s collection of stories in Demob Day, published in 300 copies last year, distorts reality, discredits the Armenia’s Armed Forces, and insults religion and Armenian mothers.

“Since in this case the subject matter is the army, they take it personally, take it upon themselves — they are insulted and begin to seek revenge,” says Ishkhanyan.

According to the author, since the police doesn’t have legal grounds to launch criminal proceedings against him, it wants to accuse him of disseminating pornographic material.

“Of course it’s absurd to include the text under Article 263, but basically, if they’re taking the legal route, even if it’s absurd, they only have that on me because in Armenia there’s no [criminal code] article for insulting the army,” he says.

Anna Israelyan, editor of the online version of local daily Aravot, finds that this is clearly censorship.

“It’s true, there is explicit material and non-normative lexicon in Demob Day, but I want to recall that this is generally nothing new. Those who are trying to make someone accountable for this, I would suggest they read, for example, Venedikt Erofeev’s Moscow-Petushki [Moscow to the End of the Line],” she says.

According to Israelyan, some may like such literature while others do not, but to try to hold someone criminally accountable for it is, at the very least, wrong.

“It’s been a long time since international organization’s assessments of Armenia in terms of freedom of speech and expression had softened somewhat. I can now predict that if the police doesn’t stand back from this issue, there’s a high likelihood that we [Armenia] will again receive negative assessments, and this will be perceived as persecution, censorship and restriction,” she says.

In the editor’s words, this situation is a return to the Glavlit (the Russian censorship office).

President of the Yerevan-based Committee to Protect Freedom of Expression Ashot Melikyan finds that calling an author in for questioning for publishing creative work is not in line with democracy.

“This is a creative piece of work: it’s true, it might not be considered tasteful, but I think that both the army and the police are still stuck in the Soviet era and long for censorship. I believe that the military police and the police have exceeded their authorities with their actions and conducting such questioning is not lawful,” he says.

In the words of the author, Hovhannes Ishkhanyan, this phenomenon intends to restrict writers’ freedom of expression.

“From journalists, now onto writers. They are putting pressure on literature; that is, a writer here [in Armenia] basically has to be a writer not for himself but for specific people, specific incidents — he has to restrict himself; not sit with his pen and paper and do whatever he wants,” he says.

An online petition in Ishkhanyan’s defense has been set up with which supporters are demanding the persecution against the author be immediately terminated.

“Literature and art are not ‘objects’ to be trampled upon by the police, and it will not succeed in bringing back the attitude toward literature [evident] during fascist and Stalinian times. Authorities’ censorship is a campaign against not only Armenian authors, but also literature and art, creativity and imagination, and fundamental freedoms,” reads the statement in the petition.