Sign Language or Subtitling? News Programs Prefer One Over the Other 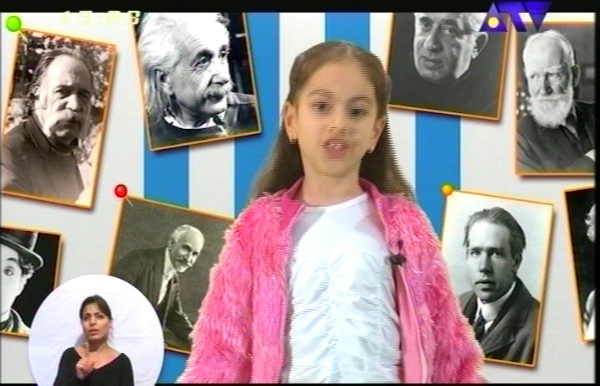 Children who are deaf or hard of hearing are now able to watch children’s programs translated into sign language on two local TV stations, AR TV and ATV, which responded to the amendments to the Law on Television and Radio that entered into force on Feb. 28. These amendments oblige not only the state broadcaster, but also private TV companies to broadcast daily at least one children’s and/or news program in sign language or Armenian subtitling.

Prior to the amended law entering into force and even afterwards, the only news program providing news in sign language was Kentron TV’s Epikentron (“Epicenter”) program, which has been on air since early February.

“A special circuit board has been ordered from abroad which is to ensure sign language via video imaging. This will get here at the end of May. Immediately after that, news in sign language will be on air very quickly,” said Yerkir Media’s news programs director Gegham Manukyan. He also considered it likely that one of their children’s programs will also be translated into sign language.

There are no children’s programs on Armenia TV. The company’s news program coordinator, Lusine Khulyan, says there’s no information yet on broadcasting news in sign language or via subtitling.

Shant TV, on the other hand, decided to add subtitling to its Horizon news program. “Sign language might come later, and a different version is also possible, where only the hands are visible and not the signer,” says Shant news programs director Aghasi Hunanyan.

Armnews, AR TV and ATV state they will continue to broadcast news with subtitling.

At Yerevan TV this issue is being discussed and most likely one of its children’s programs will be translated into sign language.

“I think that signers for children’s programs can be paid less than for news programs, because the latter lasts longer and is more complex, while children’s programming is lighter and easier to translate. TV station managers think they pay news commentators too much and they don’t want to pay a signer too,” she said.

According to statistical data, there are 3,500 people in Armenia who have hearing problems, 400 of whom are children. Union of the Deaf of Armenia president Grigor Grigoryan says that unfortunately, a portion of deaf children, those who live in the regions and don’t go to school, don’t know sign language. Grigoryan is happy that children’s programs offer sign language; however, he would consider it effective if after the law was amended, news programs also became accessible to the hard of hearing and deaf communities.

Journalists for the Future NGO president Suren Deheryan, who pursues the right to information for people with hearing problems, believes there’s a shortcoming in the law.

“The law doesn’t oblige public television or private TV companies to have news programs specifically in sign language,” he says.