An Unprecedented BarCamp Weekend in Yerevan or #barcampevn11 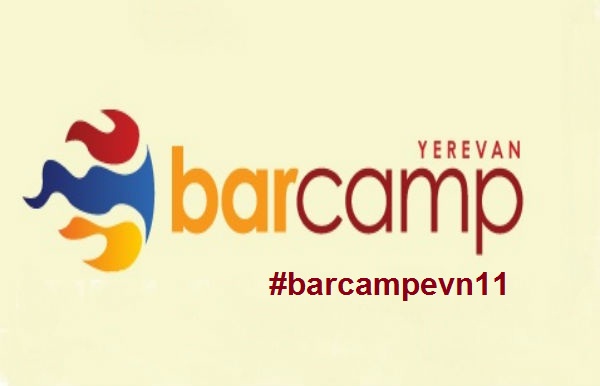 Since the New Year, geek Anahit Vardanyan (anahit.v, Antilopa-gnu) has been anxiously waiting for BarCamp Yerevan 2011: she began going to organizers’ meetings two months before the event was to take place, just so she could find out first hand how things were going to go.

“Last year, when I went to BarCamp, it was for me a very warm, amicable environment, and it was interesting that people here are very unfettered; contact with one another is free, and there aren’t things that are carefully planned — whoever can present whatever they want. Last year, when I participated, I was very excited; I decided to make a presentation this year and I presented [the Wiki site on Armenian-language] memes Chtesutyun,” she said.

BarCamp is one of those events that geeks wait for the entire year. It lasts only 2 days, but those two days are full of new acquaintances, contacts, and the exchanging of ideas, knowledge and experience. BarCamp is an open-to-the-public “unconference” dedicated to information technologies, internet and its culture, new media and other “geek” topics where speakers are the participants themselves.

The idea behind this unconference is to ensure a space for geeks of all shapes and sizes and those who support them to teach, learn, share, and develop and exchange new ideas.

Admission is free, as is the opportunity to form the schedule. Participants can suggest topics or prepare presentations beforehand, but the final schedule is defined at the start of the event, when participants write their presentation topics on the large whiteboard, noting the time and room in which it will take place.

It’s not mandatory that the speakers be professionals. The only thing that is required is their willingness to impart their knowledge and hold a discussion on an interesting subject.

Around 1,000 Armenian and foreign geeks gathered at BarCamp Yerevan 2011 last weekend. The unconference, held for the third time in Yerevan, differed from those before not only by the unprecedented number of participants, but also by the presence of invited guests from outside Armenia. At BarCamp in Yerevan this year were Opera Software’s Chief Standards Officer Charles McCathieNevile (@chaals) and Communications Manager Vladimir Isaev (@c_nel); security expert and social engineer Adrianus Warmenhoven (@_adrianus_); BBC World News host and journalist Pooneh Ghoddoosi (@poopoosh); Souce Agency’s Creative Director, blogger Dmitry Chernishev; VimpleCom’s Brand Communications Manager Ekaterina Turtseva (@Turtseva) and head of the PR Department in the CIS (Commonwealth of Independent States) of the same company, author of the Russian-language book “The Internet as a Means of Promoting Projects” (2002) Artem Minaev.

Adrianus Warmenhoven, who often attends IT conferences in different countries, noticed that there are many “geek girls” in Armenia.

“Usually, the room in such conferences is full of only guys. But here, geek girls are equally involved, which is welcoming,” he said.

One of those girls equally involved in the IT sector is Nune Isabekyan (@nisabek), who is a permanent participant at BarCamps in Yerevan. The young mathematician and Java developer doesn’t consider herself to be a geek because she doesn’t like such labels.

“I’m simply someone who interacts in the IT environment, who is interested in everything IT-related, especially BarCamp,” she said.

And BarCamp is interesting in that, in Nune’s opinion, all of Yerevan’s IT-focused youth gather here, with whom one can interact, share issues, ask questions, find solutions or simply have a good time.

At BarCamp Yerevan 2011, Nune particularly liked the job fair, where companies working in the IT sector advertised jobs to both students and professionals working in this sector, as well as the interesting presentations made by invited guests, from which she says she learned a lot.

BarCamp Yerevan 2011 organizing team member Mikayel Ghazaryan noted that their expectations of the unconference were met: there were interesting guest speakers (from abroad) and presentations — which has nothing to do with admiring that which is foreign.

“Really, if you work in this sector, the most interesting things happen outside [Armenia]; that’s why, in any case, it’s very interesting in the technology sector to interact with people from abroad,” he said.

Prior to wrapping up this year’s BarCamp Yerevan, participants voted for the best presentation, which was awarded to the ArmComedy News Network. And for the first time in the history of Yerevan BarCamps, the winner received an incentivizing award: a flip camera.