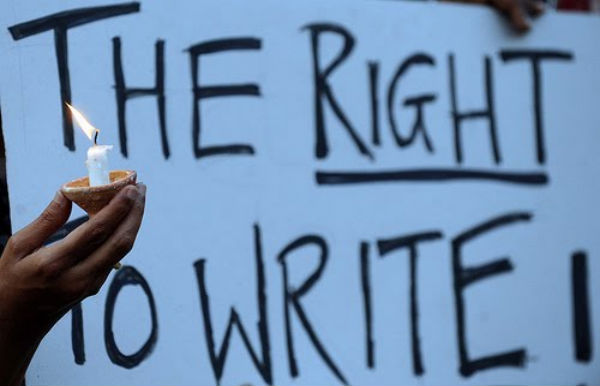 Reporters Without Borders is concerned about all the libel suits being brought against Armenian newspapers “and the disproportionate damages being demanded, which threaten their survival and create a climate that encourages self-censorship. This tendency to use lawsuits to throttle news media must be reined in,” according to a release issued by the organization on May 1.

In the first quarter of 2011 alone there were 12 defamation cases, noted Reporters Without Borders. “The repeal of jail sentences for libel and slander in April 2010 was hailed as a democratic advance but judicial harassment of the media continues… Independent newspapers are the leading targets.”

Reporters Without Borders also draws attention to the fact that in most cases the plaintiffs are politicians: second president of Armenia Robert Kocharian and his family are frequent plaintiffs.

“In most cases, the courts seem to do what the plaintiffs want, imposing the maximum amount of damages,” Reporters Without Borders notes.

The Center for International Media Assistance (CIMA) has published a report on the level of press freedom in Armenia 2001–2010, based on media monitoring and assessments by different organizations, which have been conducted in different countries around the world. The three main agencies assessing media freedom are Freedom House, IREX and Reporters Sans Frontières (Reporters Without Borders).

The IREX Media Sustainability Index is designed to measure the strength and viability of any country’s media sector. The higher the score, the better the media sustainability in that country. See here for more on the methodology behind the ranking.

Three major developments in 2010 significantly impacted Armenia’s media sector and received a lot of attention by the MSI panelists: defamation was decriminalized; in anticipation of the increased use of online media tools, Prime Minister Tigran Sargsyan launched a blog on Livejournal in late 2009, garnering attention from the blogging community over the course of the next year; and the number and influence of online periodicals, citizen journalists, and social networking platforms dramatically increased.

The last development incited tangible changes in a number of cases. To name a few, plans to demolish the summer hall of a downtown movie theater [the Moscow Cinema outdoor hall] were revoked; amendments to the country’s maternity-leave laws limiting maternity welfare payments were abandoned; and several teachers were forced to resign after videos of their beating schoolchildren were widely circulated online. Perhaps the most unexpected event of the past year, the forced resignation of the Yerevan mayor following rumors that he beat an officer in the president’s protocol department, could also be partly attributed to online media and the blogger community, which heavily covered the incident prior to the resignation.

The Freedom House score is 66 out of a possible 100 (Not Free)
In this case, the lower the score, the better the media situation in a given country.

The constitution protects freedom of the media, but in practice Armenia remains a difficult operating environment. Authorities continued to pressure and harass the media throughout 2009 in the wake of the controversial March 2008 presidential election. The government particularly sought to restrict independent and opposition media before the Yerevan mayoral election in May. Libel is a criminal offense, although no cases were brought against journalists during 2009. Access to public information is frequently curtailed.

In April, the parliament amended the broadcasting law, ostensibly aiming to improve the transparency of the process for awarding broadcast licenses. The revised legislation more effectively details the criteria on which the National Commission on Television and Radio (NCTR) is to base its licensing decisions. However, it failed to improve the independence of the Council on Public Radio and Television, which is composed entirely of presidential appointees. The NCTR is also dominated by the ruling party, and the politicization of the licensing process is evident in the continued suspension of the license for independent broadcaster A1+, which has been off the air since 2002. Despite repeated appeals and a 2008 ruling in the station’s favor by the European Court of Human Rights, the suspension remained in place at year’s end.

Television is the country’s dominant medium, and the government controls most of the broadcast media. The state-run Armenian Public Television and Armenian Public Radio are the only stations with nationwide coverage. Many of the private television stations are owned by government-friendly business elites, and broadcasters engage in a high degree of self-censorship to avoid having their licenses revoked.

Self-censorship remained widespread in the media, as lawlessness curbed the activities of journalists, human rights defenders, and opposition leaders. Throughout the year, police officers routinely harassed, assaulted, and arrested journalists, according to local press reports and media analysts.

A1+ continued to operate as an online outlet. The government claimed domestic Internet penetration was approaching 50 percent, although independent estimates were much lower. While print and online media were more pluralistic, their reach was limited to a primarily urban and educated audience.