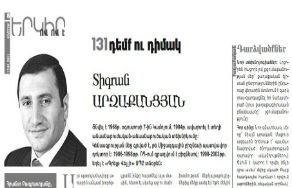 Republican Party of Armenia (HHK) MP Tigran Arzakantsyan has filed a lawsuit against local daily Yerkir (“Country”), claiming that the newspaper has sullied his honor and dignity in an article as part of a series titled “131 faces and masks” in Yerkir’s Jan. 13 issue.

The preliminary trial will take place on Mar. 25 at the Court of General Jurisdiction of Kentron and Nork Marash Administrative Districts in Yerevan.

Note, the newspaper reported on Feb. 5 that the MP had sent a letter to the editorial offices, asking them to publish it in full.

“The very literate, semi-journalistic, semi-philisophical essay in pure, clear Armenian praises Yerkir daily’s young years and criticizes the new. He also sent a notice signed by Hrant Bagradyan. Tthe latter denies saying anything about Tigran Arzakantsyan at any time: ‘That rascal is throwing our cognac’s honor to Russia’,” wrote Yerkir.

The newspaper agreed to publish the letter on one condition: that the MP “come to the editorial offices and with the same beautiful Armenian write the same letter on a blank piece of paper.”