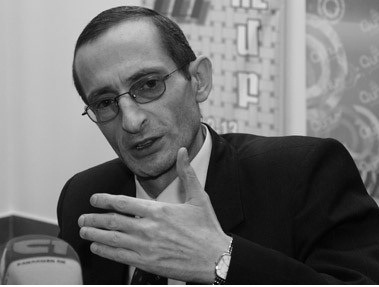 Armenia’s National Commission on Television and Radio (NCTR) President Grigor Amalyan responded to the Jan. 18 open letter sent by The Voice of Silence, a group of deah and hearing-impaired youth, expressing their concerns over a NCTR decision to cease broadcasting ALM television programs.

“At the same time, we find that [the decision] did not violate the right of the deaf and mute population to receive information, since other TV companies likewise broadcast news combined with Armenian subtitles,” reads the letter by Amalyan.

In Amalyan’s opinion, news programs that include Armenian subtitling does not violate the rights of deaf and hearing-impaired citizens of Armenia to receive information since the state provides school education for this community and the consumers of news broadcasts are of school-age, if not older.

Recall, in the open letter sent by The Voice of Silence, the youth noted that ALM is the only TV station that for years has aired its news broadcasts accompanied by sign language.

“Therefore, from Jan. 20, after ALM TV ceases broadcasting, hard-of-hearing people in Armenia will be deprived of being informed of events in the country and the world in their mother tongue (sign language). Although various TV stations’ news programs are also accompanied by running text, they are not appropriate and accessible to us,” read the letter.

Note, the group asked the Commission to take immediate measures in interpreting news programs for the deaf and hearing-impaired from Jan. 20, and to note in its response those TV stations which have received broadcast licenses and which included in their competition packages programs (news, as well as those of another nature) accompanied by sign language and whether they foresee their broadcasting after Jan. 20.