For Sonia Ezgulian, Cooking Is A Media Adventure 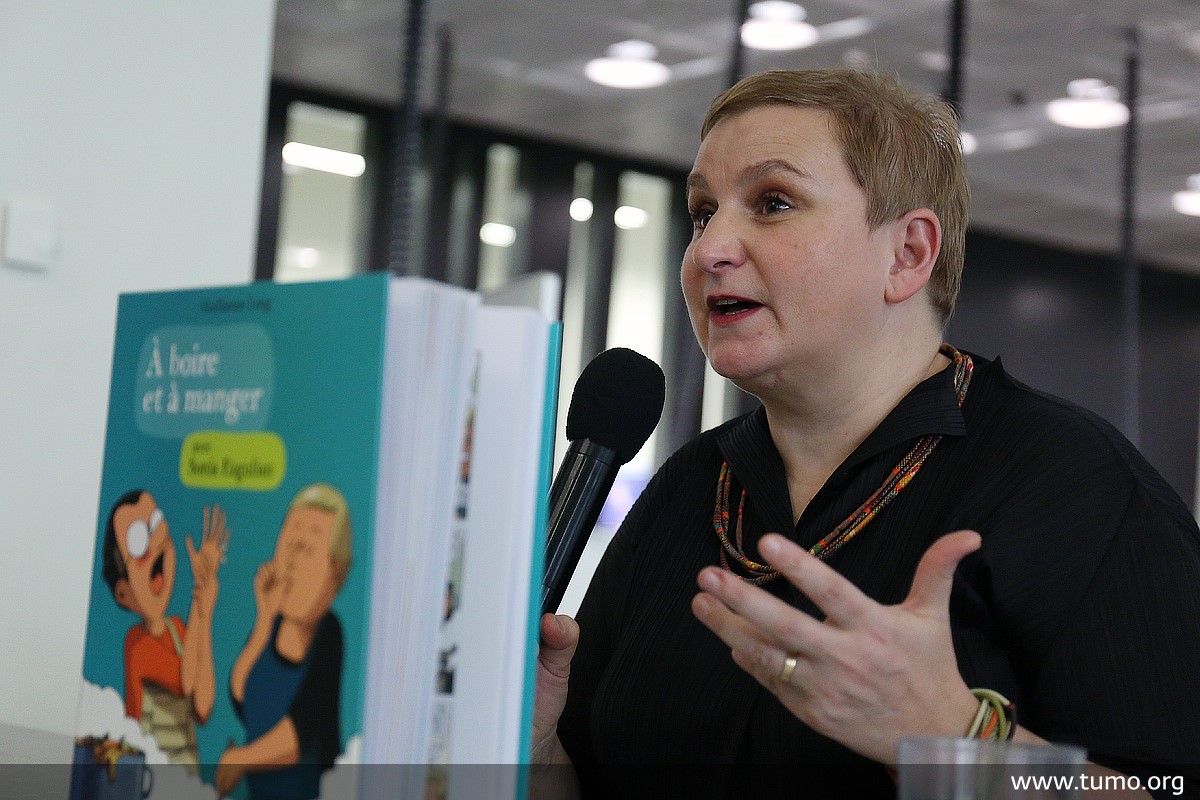 French-Armenian cook, Sonia Ezgulian, considers herself a happy person, because she managed to combine two professions that she loves, journalism and the art of delicious cooking. “I began as a journalist, then after 30 years, I returned to journalism and that was a long road,” she says.

Between the years of 1990-2000 she was a journalist for Paris Match, then she began writing primarily about the quality of food, its benefits and ways to prepare it.

Her culinary materials and active work in social media are just as spontaneous and happy as her preferred culinary style.

For example, the subject of one of her many books was transformation. Sonia visits different restaurants wearing different masks (an old grandmother, a strict teacher, a critic etc.) and writes her journalistic material on their behalf. “I like two things in this life, to write and to cook,” she says.

Her Unusual Chronicles of Usual Restaurants series has the format of memories, jokes and short stories.

Sonia Ezgulian arrived in Armenia within the frameworks of Day of La Francophonie, in order to present her and painter/designer Guillaume Long’s comic book called, The Art of Eating and Drinking with Sonia Ezgulian.

The book is a very interesting attempt to present the specific topic (cooking), not using facts and real pictures but a simple, even simplistic, style, using sketches.

Graphic novels are an important part of French culture, and regardless of the subject, they dictate it in a  light and humorous tone, which holds a French (including culinary) charm.

In the book, the kitchen is presented as an adventure which several families go on simultaneously. In accordance to classical rules, there are also the strict teacher and the insolent pupil, and many many cooking tips which are woven into the plot of the story.

One chapter of the book is dedicated to Sonia Ezgulian’s Armenian grandmother’s advice and Armenian cuisine. “I would only speak Armenian with my grandmother, after her death, unfortunately, I stopped speaking in Armenian. But her image and her pieces of advice are always with me. She taught me how to respect food, and create a holiday even out of tidbits,” says Sonia.

Sonia Ezgulian is the author of different books, is a food brand consultant and Bocuse Magazine’s editor-in-chief.

She is happy, and in her words “greedy” to learn new things and is always ready to write posts on almost all social media platforms, spreading and receiving new information about eating and the pleasure of interacting with food.

Both the kitchen and media are adventurous trips for her.

By presenting the art of cooking with a comic book, you were able to be creative, because the illustration does not pretend to be a fact. It’s an interpretation. Was that the aim?

Of course. The book was built from a family story. I was preparing food, Guillaume was drawing, and that’s how idea was born, that we could present the ingredients in a non-traditional way, as a story, rather than with grams, sizes and preparation time.

All the heroes in the comic book are real people, I told Guillaume about them and showed him their pictures, but in the end, the characters became what Guillaume imagined them to be.

For example, I told him how Armenians lived in a mountainous country, and Guillaume depicted my father in such a way that he did not recognize him with the skin of the “mountain dwelling” hero.

What is the most successful marketing step, documenting the process with beautiful pictures, or intentionally simplifying it in a cartoon style. For example, is an actual image of a carrot preferred or a hand drawn one?

I have the answer to that question, even though I use both actual photos and illustrations in my books and articles equally.

For example, in the Bocuse Magazine publications, we have a beautiful, luxurious photo series and illustrations having to do with anything tied to eating and drinking, behavioural rules, techniques and brands. The photos are taken by my husband Emmanuel Auger.

But I know, that professional photos can also get in the way.

Often when people see beautiful, high quality and professional photos of food which are captured using expensive equipment and presented on expensive tableware, they get the feeling that they would never be able to prepare the dish in the same way. It’s a bit discouraging. Illustrations, however, give the impression that everyone can chop, cook and prepare things just like the drawn hero.

I have worked as a journalist for Paris Match for ten years and only gave myself the chance to open the culinary headline and write just about the topic that I love these past two years. But then I was forced to leave journalism, when I opened my own restaurant in Lyon and started working on something completely different.

Then I sold my restaurant, when I understood that I’d be better off presenting my everyday culinary stories.

Of course, I never gave up journalism and I wrote columns and articles in different magazines. But that long break helped me to appreciate the everyday work that goes into the journalistic profession more.

Now I write with much more pleasure, since cooking is that planet which consists of different small, pleasant and delicious discoveries. Daily redundancy is overcome when you push, or as a journalist inspire, the audience to switch boring everyday cooking with kitchen adventures.

The kitchen is not only a means for exchanging information but also values.

I think that the same can be said about journalism. The important thing isn’t in the technicalities, it’s in the presentation.

You have a very interesting blog. It’s a news outlet filled with news, photos, and your personality. Cooking blogs are very popular. Do you consider other bloggers as competitors?

I don’t put recipes on my blog, just a few and it’s mostly about the story. Actually, I give direction, speaking about different topics. That’s why I am not the enemy or competitor of other bloggers.

The abundance of blogs only makes me happy, because blogs give the opportunity to communicate with many people.

It’s difficult finding the right blog, because there are many opportunities which come with technology now. You can take shiny and beautiful photos, present recipes with stunning illustrations, but in reality it might turn out that the pictures and the recipes don’t match one another.

You have to find the kind of blogger-author, who really has a relationship with the kitchen and who honestly presents culinary art.

After all, is there such a thing as a right or wrong recipe?

A recipe is only a list where you can find how much to put of what and when to add it, cook it, etc. The real culinary miracle is between the lines of the list, in the details, which you can never write, explain and especially follow more precisely later on.

For example, I learned to make yogurt from my grandmother, properly checking the temperature of the milk with my pinky, becahs no machine could help you determine the exact moment when you should add the ferment. You have to be able to keep your pinky in the hot milk for five seconds without burning it.

If you managed, then it’s the right time to make the yogurt. You must wrap the container with a warm sweater, just like my grandmother did. This episode can also be found in the comic book.

I am for spontaneous cooking, and I advise everyone to remember that the recipe is not food.

You create the food every time.

Our daily life is filled with so much information. Do you often try to find specific and relevant information both from the internet and from television? And culinary shows are a genre that go beyond the news and are a pleasant pastime. Is there a demand for them in France?

Oh, culinary shows enjoy a great reputation in France. They are also very diverse. There are original programs created by great and famous cooks, series dedicated to rural, homemade cuisine. We also have shows with thematic divisions, such as desserts, picnics and more, and there really is a demand for them.

Perhaps cooking has a bigger impact on our lives than politics.

It’s true. Important decisions are always made at the table.