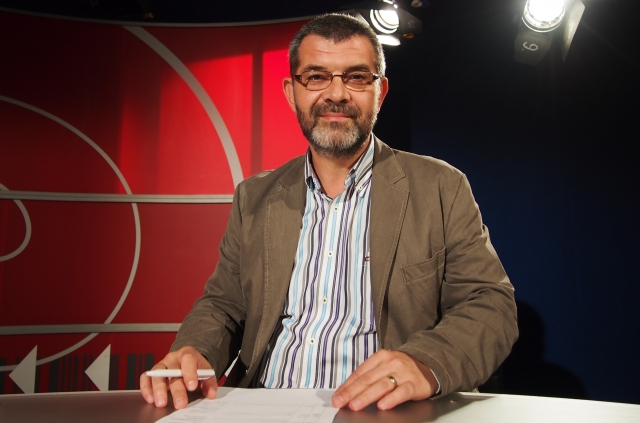 Many in Romania know 52-year-old Karen Attila Sebesi: for over 20 years, he has been hosting a political program on Romania’s national TV, as well as preparing various reportages.

Sebesi, who is of Armenian descent, was born and to this day lives in Romania’s second-largest city, Cluj-Napoca. His Armenian mother’s father (his maternal grandfather) was born in the Azerbaijani city of Lankaran, later moving to Tbilisi and marrying a Russian woman (his grandmother).

Sebesi’s father is Hungarian and a journalist by profession. Sebesi says his father worked at Romania’s state radio for over 40 years.

Following in his father’s footsteps, Sebesi is on air several times a week. During the “Project Romania” television program, he conducts interviews on political topics with officials and politicians.

He says he already knows all the guests and potential guests — how to talk to whom, what questions to ask, and so on. He has problems with neither the guests nor the management, since he’s free in his decisions — whom to invite, what questions to ask, when, and so on. “I have problems only during the first few days of my vacation, when I don’t know what to do out of boredom,” he jokes.

Sebesi says he felt the management’s support especially two years ago, when he came to Armenia and Artsakh and produced a reportage for the TV station. “The Azerbaijani embassy in Romania probably from the program guide knew that there would be a reportage from Armenia, and they were trying to ensure that it didn’t air, but our director told me the reportage will be on air however you want it.”

Sebesi discusses Armenian topics on air as much as possible: he says he tries to interview Armenians and recall Armenia and Armenians every time.

It pains him that people in Romania almost don’t know about current events in Armenia. The most topical subject is the Armenian Genocide. “And they know even less about Karabakh; only that there are frequent shootings and a state of war there,” he says.

Sebesi says that in Romania, as in different countries, the media has a great influence. There are also some journalists who people revere like gods and believe their every word.

Laughing at my question “Are you likewise revered?” he replies: “Since I’ve been working in television for over 20 years, naturally many people recognize me. They approach me anywhere, in the market, on public transportation, and start a conversation.”

“No, I must say many people like me, and I have few enemies. I also don’t have problems with the politicians or officials whom I invite to be guests on my show. Moreover, they are often driven to be thankful for inviting them to the show. My mother, sometimes watching the show, would say, if your granddad saw this he’d say you have the wit of a true Armenian.”

“I don’t know, they haven’t yet cursed, or thrown tomatoes at me,” he jokes, adding more seriously: “They respect our TV station, since we don’t show only ‘black,’ as many others, or ‘white’; rather, we try to work objectively, presenting all aspects.”