“Filming the war as chaos will double the chaos” 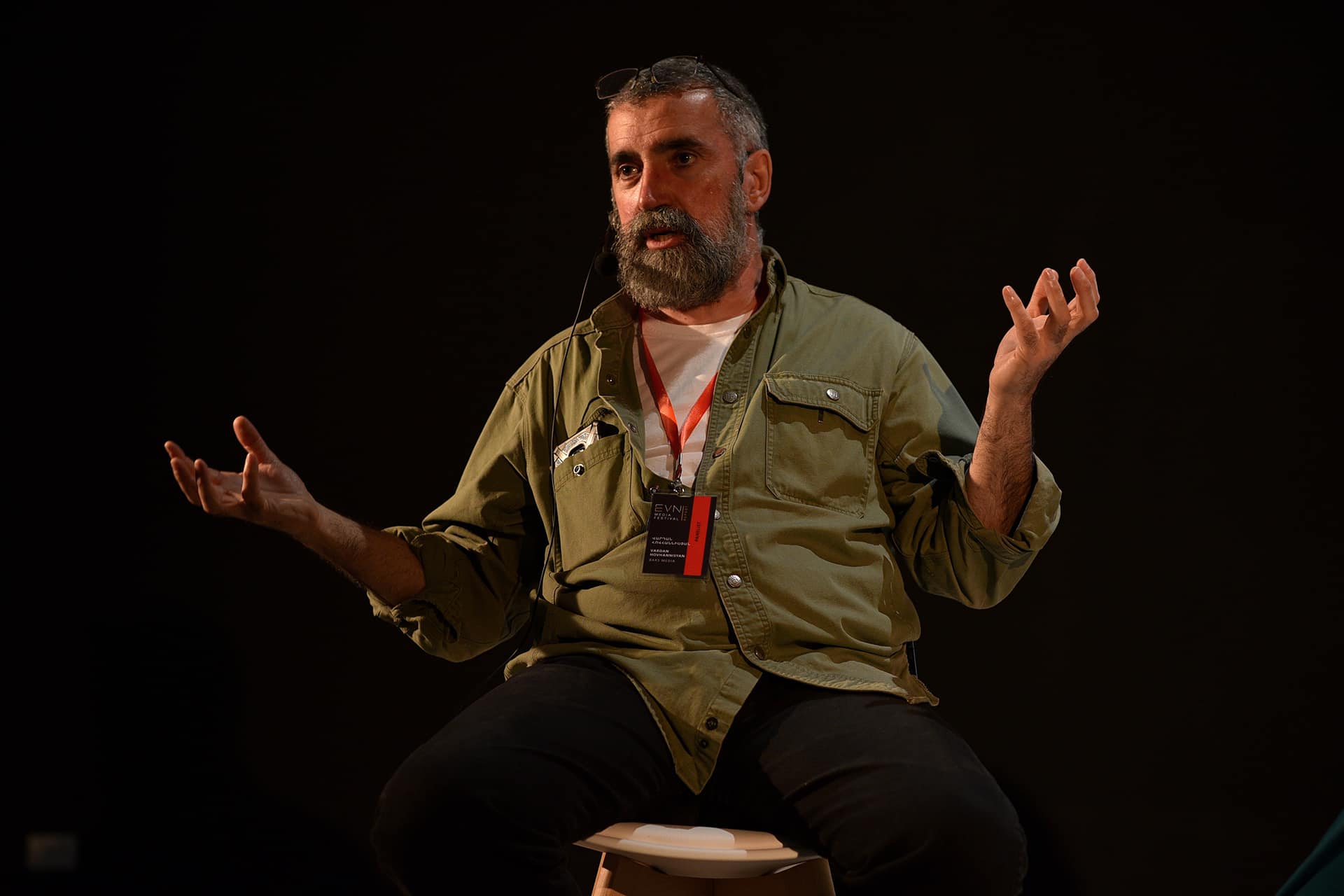 Vardan Hovhannisyan is a documentary director, producer, and cameraman. In 1993, he founded the first independent documentary film studio in Armenia, Bars Media. Collaborating with CBS, BBC, ARTE, and other leading international media, Vardan Hovhannisyan has created films and reportages in various hotspots in the Soviet Union and during the two Artsakh wars. His two experiences of captivity during wars are also unique and difficult.

Now, as he puts it, to ensure normal functioning of his brain and break free from wars, half of the year he lives on one of the small islands of Africa. And he makes documentaries in Russia, Afghanistan, Polynesia, and elsewhere.

Vardan Hovhannisyan spoke of the details of his career at the “Personal Conversations” EVN media festival, which was hosted by Sara Anjargolyan, a member of the EVN Report editorial board.

Now I look at the younger generation and try to learn different approaches from them: their perception of the world is very different and much wider. But I’m in the generation which is like “you are in the trench with us or you’re not in the trench with us.” This approach is pretty black and white and I don’t want my children to live in that monochromatic world, for me it’s important for them to experience all colors. I live in a society, in a country that is surrounded by potential wars and genocides. It may sound radical but you can’t avoid it. But I try to find balance by traveling all around the world and immersing myself in projects there: in Africa, Afghanistan, Botswana, and Polynesia. I think a filmmaker shouldn’t be trapped by one narrow way of thinking but I’m a narrow thinker, unfortunately.

Now, half of the year, I live in Africa. It’s when I do lots of war stuff. There are times when I do not want to record Armenians, I do not want to record trenches, I do not want to see a mountain, because you think in the mountains, there is a sniper sitting there. After war, you start to perceive everything differently. I want to be in a place where they do not want to kill me, beat me, break me, shoot me. And then I found a small island with only twenty thousand people, six thousand donkeys, and only two cars. I was so surprised by that. By the way, I was the worst in my class, so the teachers called me “donkey head,” and I felt like I was connecting to my brotherhood. Living in the wilderness in Africa is compensation to keep your brain functioning properly.

Similarities and differences between the two Artsakh wars

Even before the second war, I knew there were not going to be any similarities because it was totally different. After twenty years lots of things have changed. The tech, the equipment, the war tactics, and the reaction of people to the war were different too. We’ve changed. Back then we were sleeping and living in the trench and it was normal for soviet people. The new generation is different. Even myself, during this war I was thinking, what am I doing here, I have my cozy home, jacuzzi․․.

In my subjective opinion, when you go to war, it doesn’t matter who you are, a soldier, doctor, nurse, or a journalist, you must understand why you are going. I’m not an idiot who wants to go to war and die, but if you go there you must be ready for that. I think today we wage so many virtual wars, virtual propaganda, and “patriotism” that we are not ready to die [in real wars]. That’s why we have so many people who run away from the trenches. 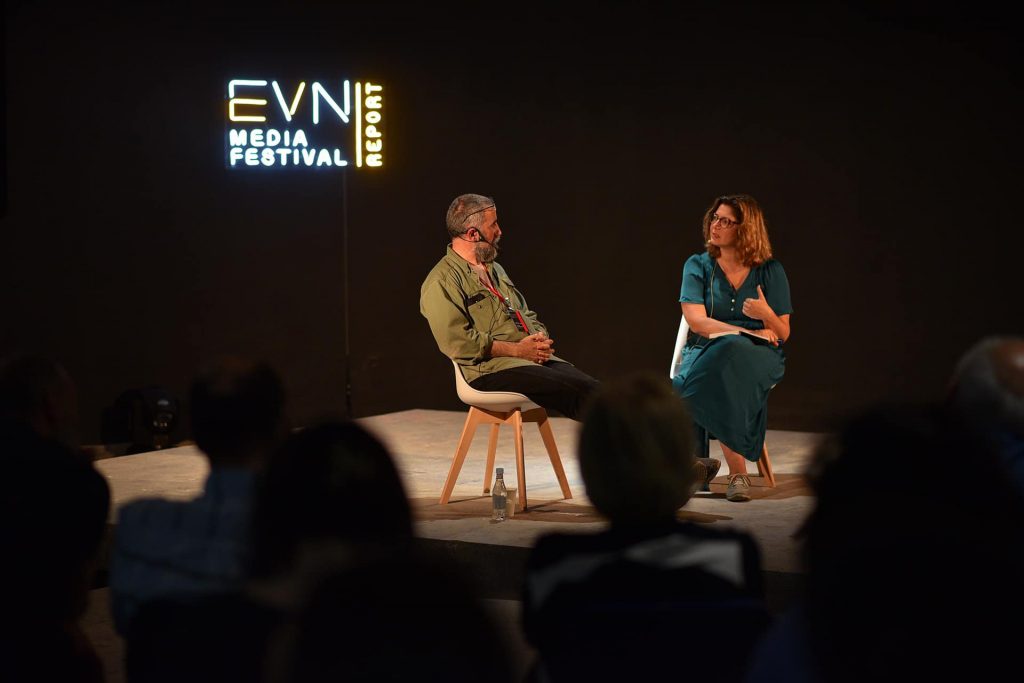 The realization that the war wasn’t going well

I have pre-war syndrome because I saw how slowly our previous victory, which is my victory, became propaganda. We made lots of statues, marches, songs like “Ardyoq ovqer en” etc. In 2008 I started to see that we were going in the wrong direction and I feel guilty that I didn’t raise my voice loud enough publicly to say “guys we create a lot of propaganda for internal use, but instead we should prepare either for war or for peace.” It should’ve been an honest discussion with society and it doesn’t happen now. As journalists and filmmakers, we should raise these questions.

“A Story of People in War and Peace” juxtaposes people during the war, then twelve years later it goes back and finds those people again.

For me it’s important not to film the war just on the frontline, it’s way more interesting to know what has happened to these people years after the war. For example, during this war, we filmed what was under the bombardment of phosphorus bombs. We had an Armenian filmmaker from Lithuania and when I brought him to the trenches I said “Marat, the first day you will shit in your pants because you’ll be scared, the second day it will be very scared, the fourth day you will start to like it and the fifth day you will say ‘Vardan, it became really funny, you know, we light up a cigarette with the phosphorous bomb.” This is how people change during war. But also we film these poor soldiers who suffer from phosphorus burns, we film their [military] operation and we plan to film their lives now: how the young guy, most of whose body was burnt, how did he find the power to become an attractive man after the war, to become a guitar player or a programmer, And for me it takes so much more heroism to survive in times of peace.

To help or to film?

I imagine what our POWs are going through. It’s quite a heavy and unpleasant experience but I try not to dramatize it too much for myself and for society. How can I help them? Unfortunately, I don’t know. During the first war, I was involved in the exchange of POWs and was thinking to myself, ‘why am I filming them, people are dying and I’m an observer?’ Maybe I could’ve done something way more important by bringing food or helping by caring for wounded people.

And very often I had the camera with me on the frontline but was not filming, I was trying to do something really constructive because filming the war as chaos will double the chaos.

I know how important it is to bring these guys back. It’s very tragic. But even for that, you must be prepared before the war: You must explain it to your commander’s unit. During one of the POW exchanging operations, we fell victim to deception and it was like “Okay, now you’re a prisoner,” and I ended up being a POW.