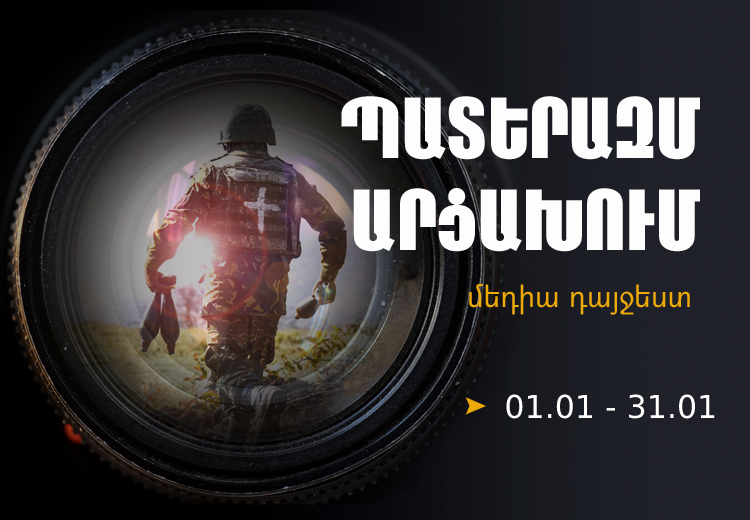 The most discussed topics in January by the Armenian media were the resumption of Armenian-Turkish relations and border incidents, both in Armenia and in Artsakh.

As in previous months, this time there were many border incidents, as a result of which the Armenian side also had casualties.

Border incidents։ From Artsakh to Armenia

If the incidents in Artsakh were connected in the context of keeping the people of Artsakh in a state of panic and evicting Armenians from Artsakh, the actions on the Gegharkunik border were conditioned by Armenia’s decision to send CSTO peacekeeping troops to Kazakhstan and the incorrect policy of the authorities.

The Taghavard and Red Market communities of Artsakh’s Martuni region are often targeted by Azerbaijani troops. During another incident, which took place on January 10, a civilian car, which was parked next to the kindergarten, was burned down.

On the same day, the Azerbaijani troops also instigated provocation in the Askeran region, opening intense fire from various types of firearms for about 15 minutes in the direction of 4 civilians engaged in agricultural work with a tractor.

And the third incident was in the Shushi area of the Goris-Stepanakert road: Azerbaijanis struck an Armenian driver’s car with stones.

When talking about the case of the Red Market, the head of the Martuni district administration, showing the ashes of the car, stated that, in fact, the enemy is actively targeting civilians, kindergartens, and schools, the facts are already proving so.

Commenting on the events in the Red Market and Askeran regions, Artsakh President’s Adviser Nelli Baghdasaryan said that Baku is pursuing two dangerous policies in Artsakh: daily terrorist attacks and steps to turn Artsakh into a closed zone, as a result of which Azerbaijan wants to evict Artsakh completely.

Kindergarten targeting is a classic example of terrorism, Artsakh Human Rights Defender said in the same issue. “Such cases will continue as long as there are Azerbaijani positions near our peaceful settlements.”

“Such actions are a manifestation of the state-level anti-Armenian and Nazi policies in Azerbaijan, which once again proves that the ‘peace-loving’ statements of the Azerbaijani authorities have nothing to do with the real terrorist and expansionist goals towards Artsakh, the Armenian people, and the region,” find the Artsakh Ministry of Foreign Affairs.

As a result of another incident in January, the Armenian side also had 3 deaths and 2 wounded. In the Gegharkunik region, the Azerbaijani armed forces also used long-range means and unmanned aerial vehicles.

Taron Hovhannisyan, an expert on Azerbaijan, says that creating a tense situation on the border is one of the main goals of Azerbaijan. “The goal is to put constant pressure on Armenia and Artsakh so that they do not have the opportunity to recover, both psychologically, militarily, and economically. Such aggressions can be repetitive in nature,” he said.

The host of Channel 5 ties what happened in the Gegharkunik region with Armenia’s decision to send CSTO peacekeeping troops to Kazakhstan. “Armenia, as the CSTO presiding country, organized the entry of a peacekeeping mission to Kazakhstan with an unprecedented operation, while Turkey had its eye on that territory. Thus, little Yerevan appeared in the center of the big Moscow-Ankara political games. According to experts, Turkey, which was slapped in Almaty, is now trying to get revenge on the Armenian border via the hands of Azerbaijan, trampling on Russia’s foot.”

In the opinion of Anna Mkrtchyan, a deputy of the NA “I have honor” faction, to tolerate Nikol Pashinyan means to attack the statehood of the Republic of Armenia from behind. 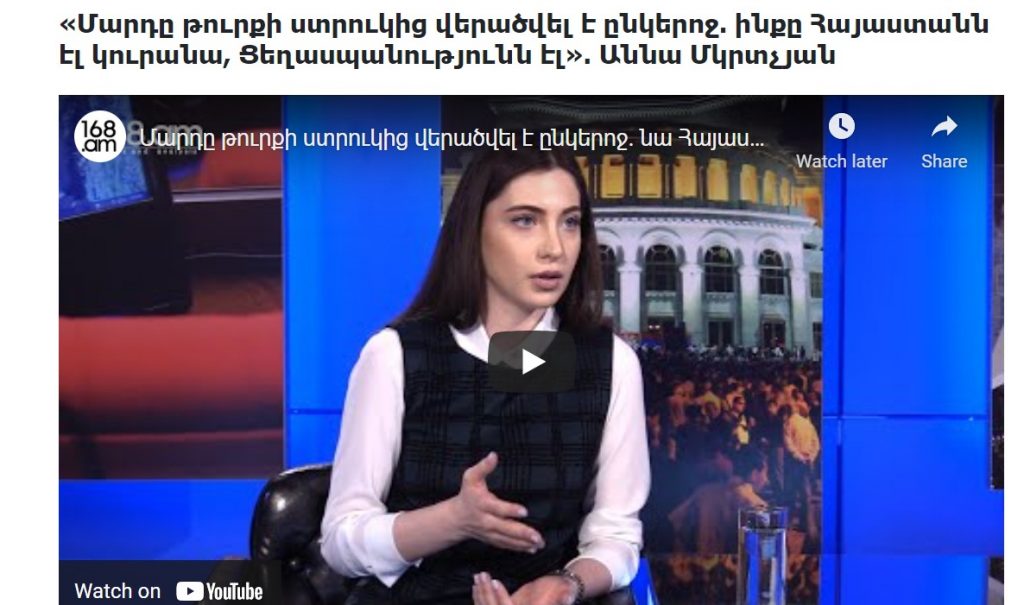 “The price of peace with Turkey … Arthur and Rudik died a few hours ago. They are the next victims of those who beg for peace from the Turks. Armenia is ready to sign a peace agreement with Azerbaijan. In two days, the envoys of Armenia and Turkey will open the “white” page of peace between the two countries in Moscow. Arthur and Rudik were 20 years old,” wrote Naira Zohrabyan, a member of the National Assembly of several convocations and head of the “Democracy and Security” NGO.

According to the newspaper, the drones used during the incident are controlled by the Russian-Turkish reconnaissance center in Aghdam (Akna), which is officially called the ceasefire control center. “That is, the center does not fulfill its functions. In other words, the attacks in Baku are coordinated with the Russian and Turkish sides.”

The latest attacks in Baku took place against the background of sending the Armenian contingent within the CSTO to Kazakhstan, the website writes, reminding that the CSTO once rejected Armenia’s application during the invasions of Armenia “sovereign territory” of Baku.

“If Russia and the CSTO were in the position of their contractual obligations in the issue of Armenia, no ‘Azerbaijan’ would dare to attack Armenia. At the same time, we are talking about September 27, 2020,” the website writes.

The border incidents were followed by the first meeting of the representatives of Armenia and Turkey, about which the media wrote the most in January. There have been various discussions and disputes in the National Assembly on this topic. The pro-government wing claims that the negotiations are being held without preconditions, while the non-governmental wing does not believe this to be true․ Some accuse the authorities of secrecy, while others think that Armenia should not take that step in the current situation.

The resumption of the Armenian-Turkish talks was welcomed by the US State Department, the European Union, NATO and high-ranking officials from different countries.

Turkologist, member of the Armenian Academy of Sciences Ruben Safrastyan considers the Armenian-Turkish talks being held without preconditions to be positive, but does not rule out that at some point Turkey will put “issues of discussion” before Armenia.

The “Armenia” bloc is not against the establishment of Armenian-Turkish relations, but the question is at what cost and at what expense should they be settled? The deputy of the “Hayastan” faction, NA Deputy Speaker Ishkhan Saghatelyan said this at the briefing with journalists in the National Assembly. 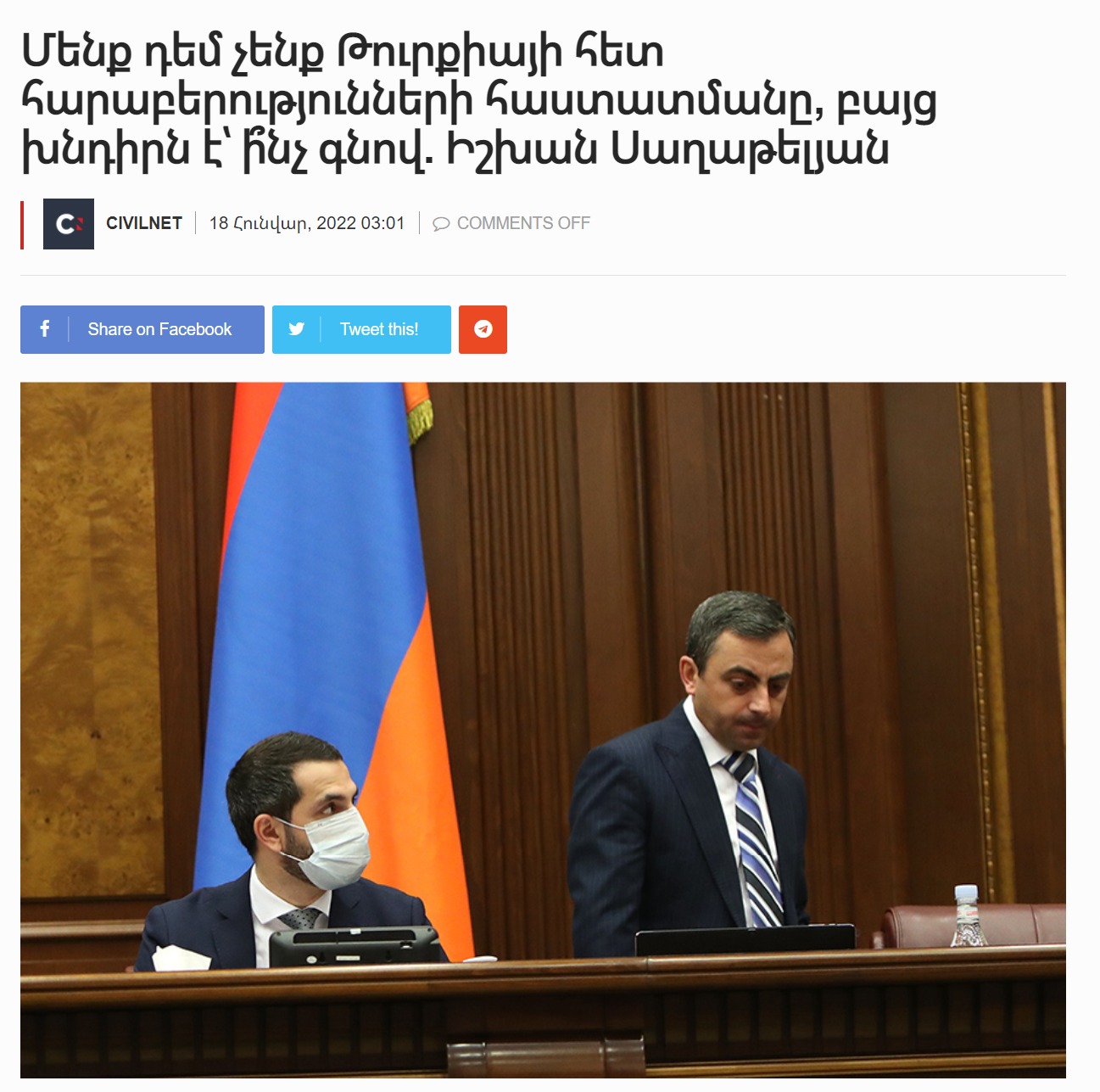 “We believe that these authorities are not able to defend Armenia’s interests even in the case of the greatest desire… Turkey is the same Turkey, but Armenia is not the same Armenia after the war, therefore, they are taking the country to a new, very dangerous cycle,” Saghatelyan said.

According to RPA member Artak Zakaryan, in this situation it is a disgrace to talk about Armenian-Turkish relations, doing business, medically treating Turks in Gyumri, etc. in this broken, broken, bloody state.

“Improvement of Armenian-Turkish relations could be appropriate if at least after 2025 we were sure that the peacekeeping contingent in Artsakh would continue its mission, if the Minsk Group format was restored and the Artsakh negotiation process was underway, our borders would not be occupied. When our economic situation would be restored,” said Artak Zakaryan.

Andranik Tevanyan, a member of the “Hayastan” parliamentary faction, thinks that Armenia is going for friendship with Turkey because the government in our country originated from the Turkish environment.

“In the context of Armenian-Turkish relations, Ruben Rubinyan will actually work as a postman, because all the issues discussed have been settled behind the scenes in Armenia and Turkey and will be resolved as a result of contacts with Pashinyan, moreover, they have already been decided.

“Even in Christianity, there is the concept of repentance for forgiving someone, that is to say, if a person has not repented, has not turned back from his wrong path, but on the contrary, persists in his course: 100-150 years ago, in the same way that he killed you, he will continue to do so with others. Has the manuscript changed, has anything changed? Do we see any remorse, repentance, atonement from the Turkish states to forgive? What, are we stupid?” conductor, Vahe Begoyan said when speaking about the launch of the Armenian-Turkish rapprochement dialogue during 168TV’s “Review” program.

The following opinions were also voiced during the discussion of the topic:

In general, the media wrote a lot about the resumption of the Armenian-Turkish talks, trying to present the opinions of pro-government and non-pro-government figures, as well as experts. Armtimes had a prominent position in the media, which mainly published the views in favor of the resumption of those relations. 168.am, Iravunq.com, Aysor.am websites gave more space to the opinions and positions criticizing the authorities.