One of the most discussed topics in the Armenian media in September was the incidents on the Goris-Kapan road.

During the month they were not few: arrest, kidnapping, the open manifestation of ridicule, etc.

The establishment of a base and arrest of Iranian drivers

The media attention was again focused on that road section when it became known that near the Vorotan settlement on the Goris-Kapan interstate road, the Azerbaijanis were checking trucks with Iranian license plates.

Initially, unofficial information appeared in the press, then it was officially announced by the RA National Security Service, using the Azerbaijani version of the place names in that area, which later became the subject of active discussion and comments.

Among them was the statement of the RA Prime Minister Nikol Pashinyan during the government-NA question-answer session, where he, referring to the rumors about his use of the names of Eyvazli and Chaizam, noted that it was done to make it clear to the citizens that the points in question are not in the territory of the Republic of Armenia, but outside that territory, which the Republic of Armenia de jure adopted by the law adopted in 2010.

The RA Human Rights Defender also referred to the situation on the road, noting that the Azerbaijani police base, barricades and cameras, the deployment of armed servicemen on the Vorotan road are openly illegal and are subject to immediate removal.

The ombudsman’s fact-finding efforts also revealed gross human rights violations on that section of the road.

A few days later, it became known that the Azerbaijani police had arrested two Iranian drivers on the Goris-Kapan highway section of the Vorotan community. This news was followed by the official news from both Armenia and Iran.

These events were actively covered by some media outlets, some even worked on the spot and presented the opinions of Iranian drivers.

“The November 9 Russian-Turkish” trilateral” package under the name of unblocking communications is aimed at the complete blockade of Armenia through mandatory corridors and control of Armenian highways. “While the Armenian government continues its empty talk about ‘maps of Azerbaijani territories’ and the railway connection, Moscow and Baku are accelerating this process from Syunik to Tavush,” Lragir wrote.

The situation on the Goris-Kapan road section led to the opening of another front, Azerbaijan-Iran. Some have already started discussing the possibility of possible clashes between the two countries, including military ones. 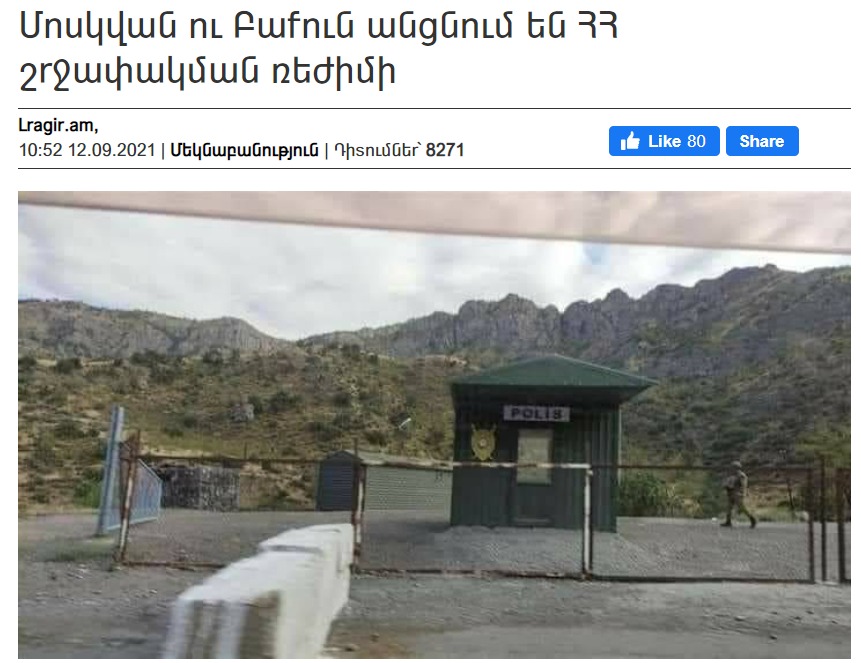 According to orientalist Armen Petrosyan, the 44-day war, as a result of which the military balance in the region is upset, all the steps taken against the Iranian side create a bunch of problems, which leads to strained relations. The response of the Iranian side is in the statements of various religious and political figures and in the ongoing military exercises.

According to the newspaper, Baku’s assertion that Iranian cars pass through its territory, which means that they have to pay, is not only a violation of Armenia’s territorial integrity but also a demarche against Iran.

“Judging by the course of events, Baku and Ankara are preparing to carry out provocations in northern Iran on the eve of a new Iranian nuclear deal. The recent clashes between Kurds and Turkic-speaking Iranians are a prelude to a further confrontation in northern Iran,” the author concludes.

In another article, the website refers to Nikol Pashinyan’s statement that the withdrawal of the Armenian armed forces to the borders inherited from Soviet Armenia was carried out to avoid a new military escalation.

Thus, Armenia does not agree to provide Baku with a “corridor” under “Russian control,” stating that it is ready to open communications, but with mandatory customs and border checkpoints. In response, Baku, in the presence of the Russian military, is already setting up a customs point in Armenia.”

“The government has announced the expansion of the 102nd Russian base in the Syunik region. Have any documents been signed defining the functions of the Russian troops? Has Russia “agreed to protect” Armenia’s borders with the ultimatum to provide a “corridor” through Meghri? And is Russia responsible for ensuring the safe movement of goods and vehicles via the Iran-Armenia route?”

The bus transporting teenagers and the kidnapping of two young men

On September 17, on the Vorotan segment of the Goris-Kapan road, the Azerbaijanis stopped a minibus transporting Artsakhian children.

“The Azerbaijanis stopped the bus, made everyone get off with a very impudent behavior and started checking the car. Fortunately, the Russian border guards noticed and sent the children on their way,” said Goris Deputy Mayor Karen Kocharyan.

Russian border guards were also criticized for the incident․ “It turns out that the Azerbaijani military has set up a checkpoint on an Armenian road, stopped Iranian cars and buses with Armenian children, and somewhere nearby there are Russian border guards, who intervene only after the act of humiliation is over.”

MP Anna Grigoryan mentioned the incident. “At that moment, our national dignity was being erased, and to tell the youth that Artsakh is Azerbaijan is another humiliation of national dignity.”

And Artsakh Minister of Education and Science Lusine Gharakhanyan called the incident a classic example of terrorism. Meanwhile, according to the media, “the savagery of the enemy was called a small action by CC member Alen Simonyan.” 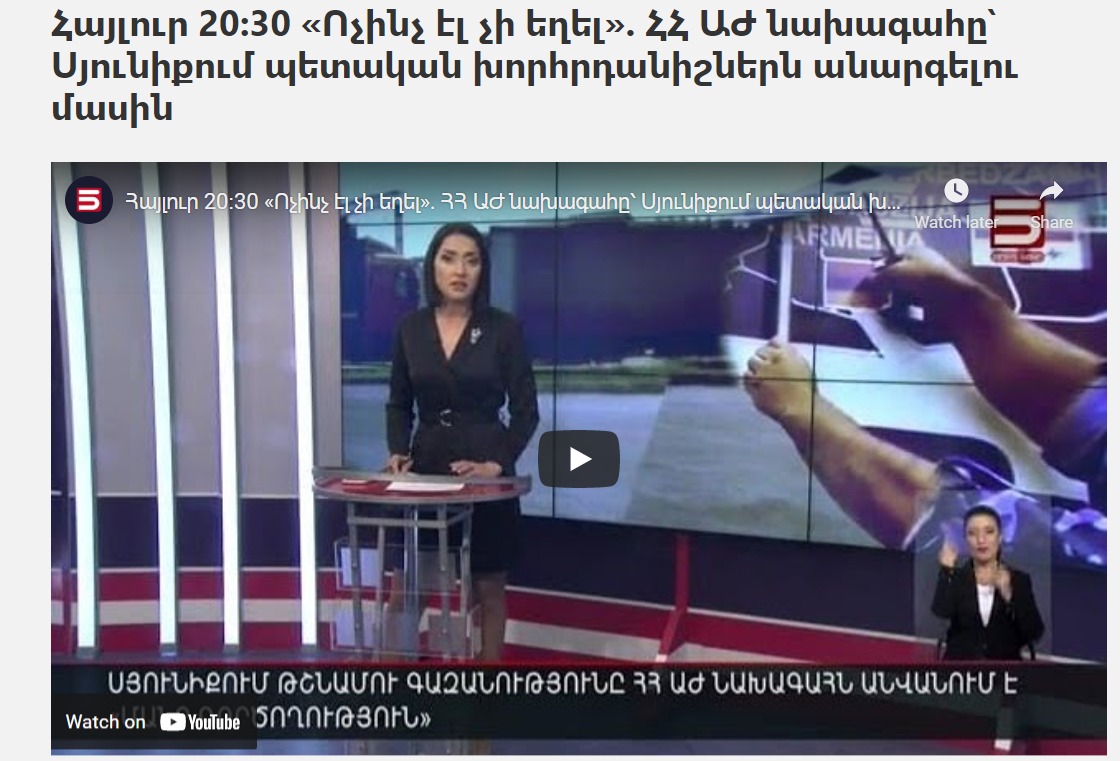 Artsakhian ombudsman Gegham Stepanyan thinks that the raging struggle against the state symbols of Artsakh is another manifestation of xenophobic behavior by the Azerbaijani government and military towards Armenians.

Another incident took place on September 18. The RA NSS received information that on the same day, two residents of the Kasakh community of the RA Kotayk region while traveling on the Goris-Vorotan road section, “deviated from the highway and appeared in the area under the control of Azerbaijan.”

Despite the official opinion, many believed that the young men had not been lost but had been abducted.

This is also the opinion of “I have honor” faction MP Tigran Abrahamyan․ “Citizens traveling on the Goris-Kapan interstate road know well that the possibility of deviating due to road confusion is almost impossible. Either the section under the control of Azerbaijan must be intentionally entered from the highway or kidnapping must take place.”

The media also actively discussed the situation in the villages of Syunik as a result of the unblocking of roads, people’s concerns, fears, distrust of the opposing side and so on. There was also a reference to the economic consequences.