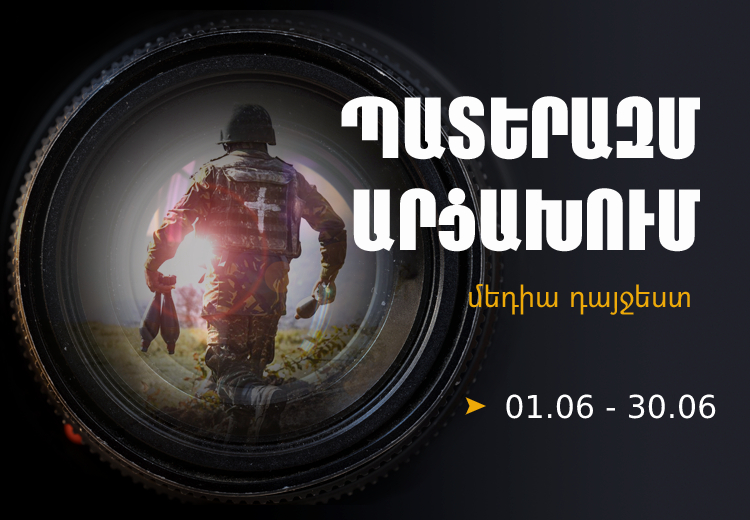 The most discussed topics in the Armenian media in June again referred to the Artsakh war, post-war developments and the return of prisoners. This time the mentioned topics became part of the pre-election campaign of the political forces participating in the June 20 parliamentary elections.

Representatives of the ruling party “My Step” (“Civil Contract” party) and the “Armenia” and “I have honor” blocs blamed each other for betrayal and the current situation.

The latter urged not to elect the ruling party, emphasizing that as a result we will have a new war, new victims and wounded, new captives and losses.

He also noted that in 1998, under Kocharyan, it was decided to withdraw Karabakh from the talks.

Hayastan Alliance candidate for prime minister Robert Kocharyan said in one of his meetings with voters, “Today the borders are defenseless, the backbone of the army is broken, today it is not safe even inside the country. If these people did not come to power, we had the opportunity to negotiate skillfully for about 30 years.”

During the interview with Petros Ghazaryan, Arthur Vanetsyan, the candidate for prime minister of the “I have honor” bloc, stressed, “Nikol means new war, new captives, new victims.”

The representative of the “I have honor” bloc, the third president of Armenia Serzh Sargsyan, said to all those who wanted to re-elect the current government, the list of losses would increase, “By voting for this traitor, you will agree to the surrender of Artsakh, and later of Syunik. You will allow the war to continue.”

Another representative of the same political team, Eduard Sharmazanov, said that “on June 20, we must prove that we do not tolerate Aliyev and Erdogan’s collaborators in our homeland.”

During the program, “Agenda,” on ArmNews, the leader of the “Freedom” party, former Prime Minister of the Republic of Armenia Hrant Bagratyan said that the salvation of the people is the removal of Nikol Pashinyan. “Pashinyan has signed four documents, two of which have been implemented, and two are in progress. The only way to stop the process is to not vote for Nikol into power, to vote for not Nikol on June 20.”

Gagik Tsarukyan, the leader of the Prosperous Armenia party, who participated in the elections, spoke at all pre-election meetings about signing a military-political agreement with Russia and the need for close security cooperation with Russia. “The Armenian and Russian soldiers must maintain the border together so that our people are calm and not tense. Then, not even a fly can move, then, both the people and the borders will be completely safe and secure.” 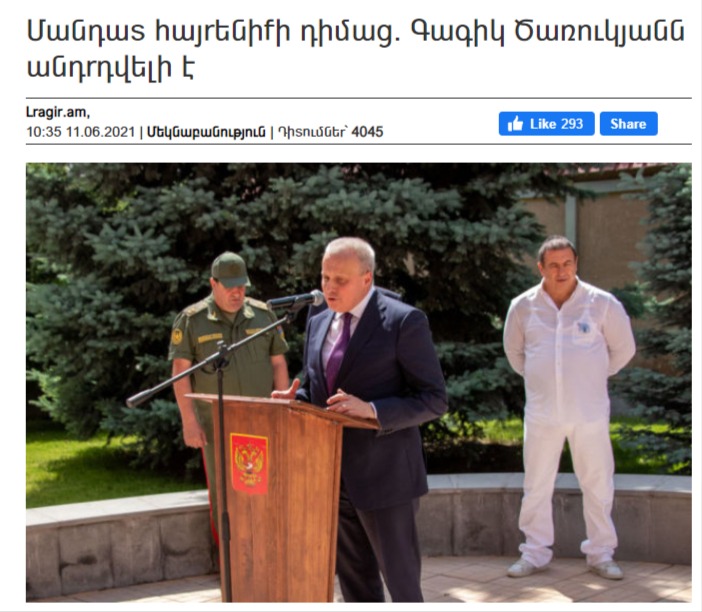 According to Areg Kyureghyan, a representative of the National Democratic Pole, neither the CSTO nor Russia fulfilled their allied obligations to Armenia. “Back in 2016, we said that the next war would be bigger, with both territorial and human losses. It is being prepared for Armenia by our allies and the CSTO. Now it has been proven.”

The leader of the European Party of Armenia Tigran Khzmalyan also thinks that Armenia should leave the EEU and the CSTO and initiate the process of joining the European Union and NATO.

According to him, joining another security system will allow for resolving the Karabakh conflict in favor of Armenia.

The leader of the “Republic” party Aram Sargsyan thinks that if Russia had defended the interests of its ally partner, the 8th point, the return of the captives, would have been implemented long ago.

“We believe that at this stage the solution to the problem should be transferred to the UN Security Council. The United States and France must also participate in the demarcation process. Moreover, peacekeepers should not be from only one country.”

Arman Babajanyan, a member of the “Babajanyan-Shirinyan” bloc, questions the quality of Russia’s strategic allied relations. “Stepanakert simply did not surrender for the presence of peacekeepers.”

Babajanyan mentioned in another meeting, “Yesterday it became clear that our strategic partner Russia is undergoing a completely new transformation in connection to the Artsakh issue. Is there no doubt for anyone that the Azeris could encroach on our borders, invade the territory of a sovereign country without Russia’s permission and provocation? Now they have decided to advise the other members of the OSCE Minsk Group not to bring the issue of Artsakh’s status to the forefront because first, we must find ways for the Armenian and Azerbaijani peoples to live and work in an atmosphere of peace and solidarity. This is just a mockery of us and we must admit that Russia behaves like a serial killer.”

Garegin Chukazyan, a member of the National Democratic Pole, is of the same opinion. “The enemy had approached Stepanakert, who could have prevented him from entering Stepanakert, if not Russia? When there is a conditioned war, they permit the opponent for as much as they have agreed.”

Another member of the party, Hayk Martirosyan, believes that Armenia was sold by a “strategic ally” to his real ally.

He noted that they have nothing against the Russian people, they are against the Kremlin, Putin’s Russia, the imperial government and politics․ “Instead of non-existent allied relations, we offer to have real allies instead of Russia, which is weakening and leaving the region, handing over and selling to Turkey, not resolving the issue of captives, and not wanting to resolve the Nagorno-Karabakh conflict. Having the status of an ally of the United States, nothing will prevent us from cooperating with France, India, Iran and other countries.”

The author of “Lragir.am” Naira Hayrumyan writes that Russia, which managed to open a program “Mirotvorets” on Artsakh TV and force a declaration of Russian to be the second official language in Artsakh, is doing everything to snatch Artsakh from Armenia.

“Armenia’s ‘right’ to Artsakh is recognized by both the international community and Aliyev, who asks Armenia to recognize Artsakh as part of Azerbaijan. However, the government in Armenia and the pro-Russian opposition do not demand to discuss the Artsakh issue in the parliament, to recognize the union or the status of Artsakh, they do not refuse a trilateral statement.”

Throughout the campaign, the representatives of the favorite forces were in long-distance battles over the return of the captives.

It all started after Nikol Pashinyan, in response to Serzh Sargsyan’s statement, “let him give his Ashotik in exchange for 20-25 people,” announced that he was ready to give his son in exchange for all the captives.

Ishkhan Saghatelyan, a member of the “Armenia” bloc, responded like this. “Today, that landgiver announced that he was ready to apply to Aliyev. This man continues his monkey business. If you’re man enough then take care of your own son.”

According to Agnesa Khamoyan, the candidate of the “Hayastan” bloc, Ashot Pashinyan could even be taken to Azerbaijan for a few weeks, kept in state of glory, and then returned. 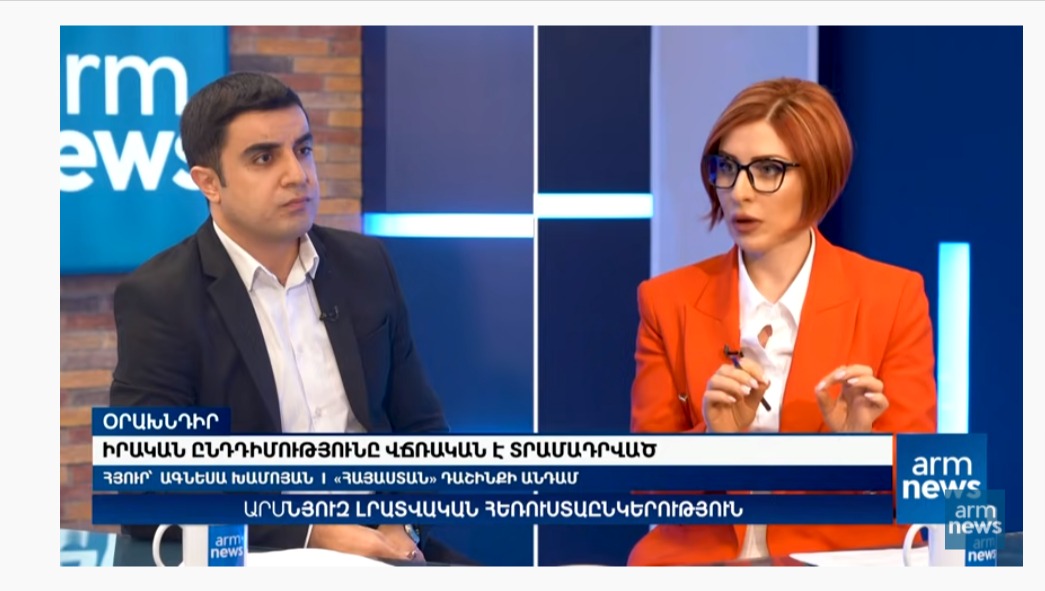 “The reproduction of these authorities is of vital importance for Azerbaijan and Turkey. ․․․ It is very important that every citizen of Armenia participates in the elections. Every unvoted ballot will go in Aliyev’s favor,” Agnesa Khamoyan concluded.

The other occasion was the return of 15 prisoners, the terms and conditions of which were discussed and criticized by the opposition.

Nikol Pashinyan in the Gegharkunik region, referring to the topic, mentioned, “We did not exchange the maps with the captives, but we responded to one step with another step. After the return of the captives by Azerbaijan after November 9, we regularly transferred a certain number of maps to Azerbaijan, but in time the Azerbaijani leadership stopped the return of our captives and appealed to the international authorities that Armenia refuses to provide mine maps. We have never given up, it is Azerbaijan that has stopped the process of returning the captives.”

“Several questions arise, why with 15 people? Those maps gave us much, much more opportunity than 15 people to return. If it is possible to return prisoners in exchange for maps, why didn’t they do it in these 8 months? Did they keep it for a pre-election show?” He asked.

Artak Zakaryan, a member of the same bloc, continuing his teammate’s thought, noted, “Can you imagine our captives that we could have brought 5-6 months ago. They allowed our boys to suffer, to be tortured because the capitulator should have done it a few days before the elections.”

In addition to these topics, other opinions were also voiced. For example, if ANC leader Levon Ter-Petrosyan comes to power, the issue of prisoners will be resolved in a week.

And the leader of the “Liberal” party Samvel Babayan sees one way to return the captives: to take Azerbaijani captives and exchange them with Armenians.

And the member of the “Armenian Homeland” party Artak Galstyan emphasized, “Today, about 1,000 Azeris are in Armenia, which can be exchanged with our captives.”