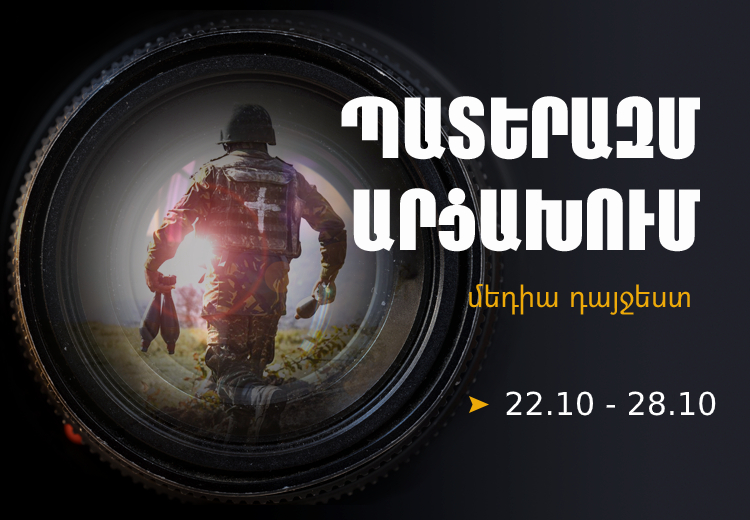 The Artsakh war and its aftermath are still the top topics in the Armenian media.

Media.am touched upon the first ceasefire announced by Russia during the war and the second ceasefire initiated by France.

Next was the attempt of the other OSCE Minsk Group Co-Chair country, the United States, to cease hostilities. The ceasefire was to enter into force on October 26 at 8:00 am.

Compared to the previous two, this ceasefire lasted a little longer, although before 8 o’clock the Ministry of Defense of Azerbaijan hurried to accuse the Armenian side of grossly violating the ceasefire, but after a while removed that information. Minutes later, the Azerbaijani Defense Ministry spread another piece of misinformation, noting that Armenian forces were shelling Azerbaijani positions in the southern direction.

The Defense Army of the Artsakh Republic, denying the news, in its turn stated that the units of the Defense Army strictly backed down from the agreements reached, noting that the accusations of the hostile side were made in order to prepare information ground for the latter’s further provocations.

Those didn’t come after long: At around 08:45, artillery fire was fired in the direction of the north-eastern military positions of Artsakh. RA Ministry of Defense spokeswoman Shushan Stepanyan stated such on her Facebook page.

The President of Artsakh Arayik Harutyunyan referred to the gross violation of the ceasefire by Azerbaijan for the third time, noting, “All this confirms that the Azerbaijani authorities, with the unconditional patronage of the Turkish authorities and the support of mercenary terrorists, have no intention of resuming the peaceful dialogue and openly make it clear that they will continue their military efforts for the final eviction of Armenians from Artsakh. Therefore, our national task is to fight for the safe and dignified existence of the Artsakh Armenians in their homeland. The security and rights of our people are not subject to any concessions, and our determination in this matter is beyond all circumstances and desires.”

And his spokesman Vahram Poghosyan emphasized, “Appropriate investigations will be carried out into this blatant impudent behavior of the Aliyev regime towards all civilized humanity, but today it is the task of all of us to defend the Homeland from the Turkish-enemy. They have left us no alternative, and that is the only way, it should lead us only to victory.”

In his article, Civilnet journalist Tatul Hakobyan referred to the October 29 meeting of the OSCE Minsk Group Co-Chairs and the Foreign Ministers of Armenia and Azerbaijan in Geneva, “If, as in the previous two cases, Azerbaijan uses the ceasefire agreements to reposition itself, to continue large-scale attacks and rocket fire along the entire line of contact, the Geneva talks may become meaningless, even though, on the other hand, diplomatic work must be kept alive, as they have been treated with care in recent years”

“One of the best ways to silence artillery is intensive diplomacy.

…Azerbaijan is trying to transfer the advantage of the four weeks of war on the battlefield to the diplomatic platform, to dictate its will. To fight with one hand and to negotiate with the other, as throughout the 1991-1994 war. …In addition, Azerbaijan receives the unconditional support of Turkey, which it received in the 90s, but not in this volume. Turkey is simply undermining the negotiation process at the delicate point where a humanitarian ceasefire can be implemented.”

Political scientist Suren Sargsyan told Haykakan Zhamanak that the ceasefire violation was a blow not only to the Minsk Group as a measure, but also to the personal reputation of the leaders of the mediating states, who “put their personal authority to settle the issue, and suddenly it turned out in such a way that Azerbaijan violated the agreement in all three cases and broke the ceasefire.”

In a conversation with “First News” the chairman of the NKR NA Foreign Relations Committee and the head of the ARF faction, Vahram Balayan, said that he did not have such great expectations that the terms of the ceasefire would be fulfilled. “Now that he has some progress in the southern part, he will try to get the maximum opportunity to be able to speak the language of the winner during the talks or, as the Turks say, to force the Armenian side to capitulate. This is their main goal. In such conditions, of course, there can be no ceasefire, because they are constantly escalating the situation.”

In an interview with Lragir, political scientist Kayts Minasyan advised the Armenian side to stop believing in the ceasefire calls, as “Azerbaijan does not need them in the current situation.”

“It would even be a defeat for Aliyev if Azerbaijan respected any such call for a humanitarian ceasefire. The purpose of these humanitarian ceasefire calls is to save the Minsk Group and separate Azerbaijan from Turkey. That is why Armenia respects the ceasefire calls, but Baku does not. In fact, until Azerbaijan achieves a major strategic change, Aliyev will reject any ceasefire. And Armenia must now think about retaliating against Azerbaijan. I am convinced that it is already doing that,” he said.

In his opinion, the international community was well aware that Azerbaijan violated the calls for a humanitarian ceasefire, but it failed to turn speech into an act of coercion against Baku. Baku used it, but since Azerbaijan could not win the war, Aliyev continued to believe in his myths, and this reinforced the Armenian demand for the recognition of Artsakh’s independence.

Recognition of independence as a way to achieve peace

In its anonymous article, “Lragir” referred to US President Donald Trump’s statement that he would easily reach a settlement of the Karabakh conflict. “We will put everything in order. That should happen, as I say, easily. It will be easy if you know what you are doing.”

Trump mentioned his successes in resolving conflicts, particularly in the Middle East – the Israeli-Arab agreement, and in the Balkans – the signing of the Serbia-Kosovo agreement in the White House. In this regard, he said, “We did it with Kosovo. Can you believe me?”

“Can Trump’s hint about Kosovo and Serbia mean that the US is considering the recognition of Artsakh in the Kosovo version? It should be noted that this option has been discussed in US political circles for a long time, even once the US was close to recognition. When Trump says that the settlement of the Karabakh conflict will be easy, indeed, the recognition of independence is the ‘easiest’ option, in the sense that all the options for a settlement so far have not led to a solution, but to new tensions and wars,” the author wrote. 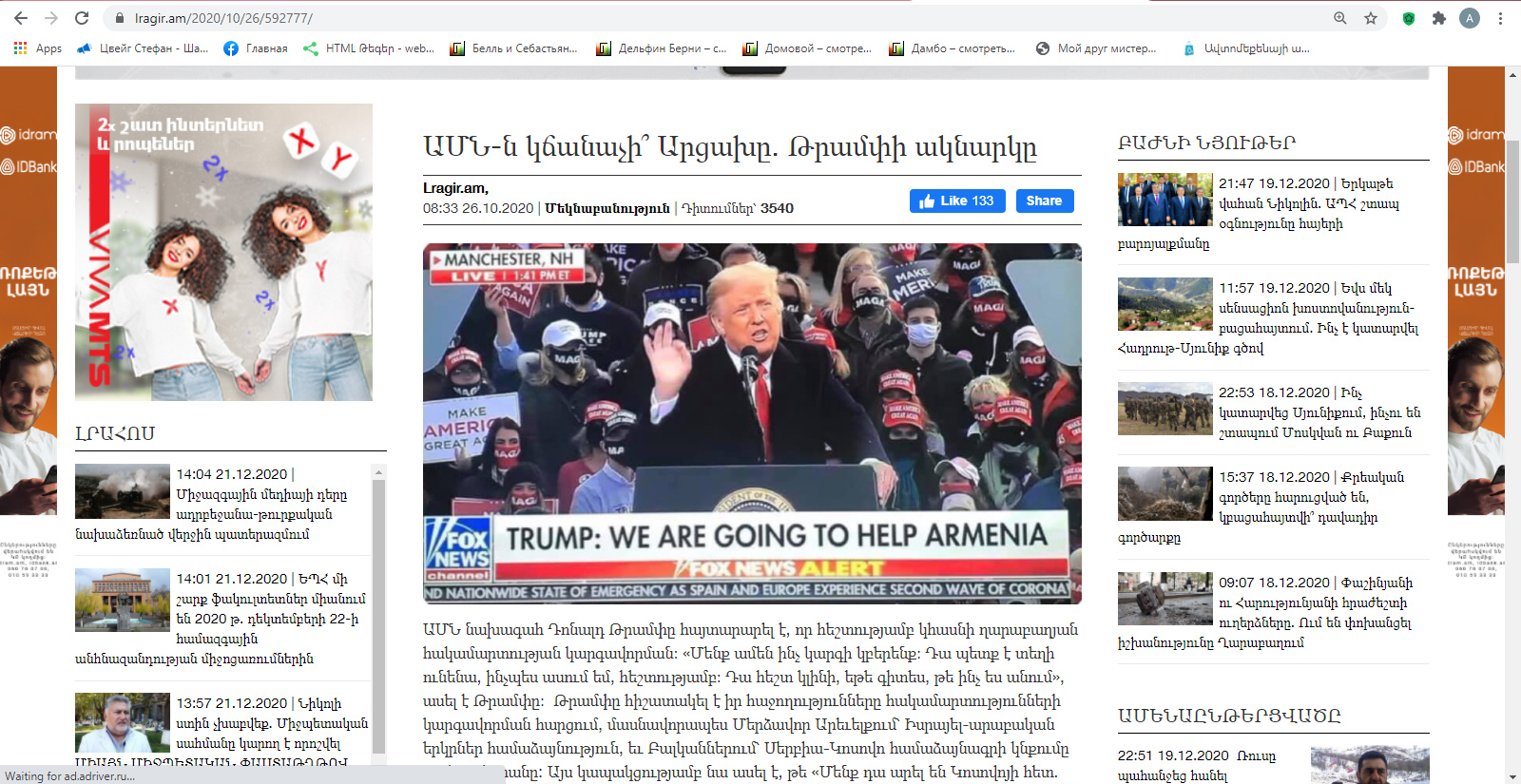 According to journalist, novelist, “The Washington Post” columnist David Ignatius, the negotiations for a ceasefire are a real nightmare for diplomats. The attackers want to gain an advantage, the defenders do not want to make concessions at gunpoint.

David Ignatius noted that a lasting long-term result for Nagorno-Karabakh could be the acquisition of autonomous status. “But any question of a final status is far from over as long as the guns are firing,” he wrote.

In the reports on the non-observance of the US-mediated humanitarian ceasefire, the media referred especially to Donald Trump’s political rating and weight, taking into account the US presidential election. It was presented that if Azerbaijan did not listen to the United States, it would be a direct blow to Trump personally, to the latter’s administration and authority.