Covering War in Your Own Country Is the Hardest Thing 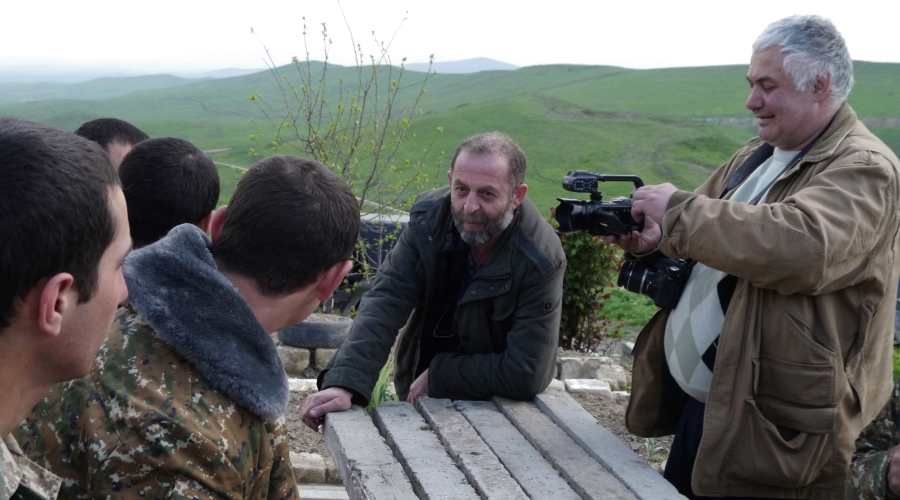 I’ve never considered my physical safety; I’ve always just thought that I have to be there and that’s it.

Recently, I’ve begun to think about these issues more, because I coordinate the work of Hetq and I am responsible for my many employees.

Many of our employees participated in various classes on security. I think you have to know all the laws and rules. To what extent they will be able to follow them is a different issue.

If a journalist has decided that he has to go to a conflict area, then he understands all the dangers; it’s his decision. In many cases, self-defense is at the instinctive level; you often don’t even think, you simply do. If the person beside you gets wounded, you try to help him, not think about your own safety.

If you’re already on the scene, then you have to cover it. The danger can be unexpected, and of course you have to be careful. Covering war in your own country is the hardest thing.

It’s easy to give advice in class, but in real life, everything is a bit different. If there’s a war there, you have to be there.

Actually, in my case it’s a manifestation of egoism. You leave behind your family, your loved ones, and to feel good about yourself, to be content with yourself, you go to war.

My oldest son had already been born. I was 29–30 years old. In 1990–1991, I went to Artsakh as a journalist. I was preparing reportages from Artsakh for Public TV of Armenia’s Haylur program. Then I told my family that I’m going to stay, I’m not going to return. I joined Monte’s detachment. Until winter 1994 during the fighting I was in Artsakh as a journalist.

During the hostilities, for a few months I stayed mainly in Martuni, also in Martakert. At that time now as a soldier.

It’s not possible to present the war through books, text, or stories. In reality, it’s completely different: the first battle, meeting the opponent for the first time, the first night spent on the battlefield.

In war, I don’t see heroism, but tragedy. When the press writes about the heroism of heroes, tragedy is also at the heart of it.

The boy becomes a hero, destroying his family. But they don’t write about the real tragedy or write about it such that the pathetical dominates.

There shouldn’t be bad characters in those texts. But everything exists in war: betrayal, escape. The truth is more brutal than is presented.

When I joined Monte’s detachment, he was already a symbol. He was honest, and everyone wanted to be honest like him, to be like him. We had a video camera, and we would film. I did a few interviews with Monte. We sent the footage to different places, especially abroad, so that people outside could see the situation in Artsakh.

In the detachment, they called me a journalist. At the time we had almost no conflict reporting experience; we were learning from our mistakes.

There were the traces of closed Soviet life, it was a time of developing independent media, everything seemed to be starting from zero.

Every day changes a person, let alone war. You’ve walked through the dead — how can war not change you?

War lodges into your brain, and you can never get it out of there. It’s very difficult to live a normal life after war. You look at the world with completely different eyes. It seems no one understands you, and, in fact, no one truly does.

Many have found themselves in such a state. You carry all the problems inside you, and they increase more and more over the years.

Also in war, all the rules and principles of journalism are broken. There are many books and handbooks on war reporting, but they’re all about the wars of others.

There’s no handbook on covering war at home. It’s very easy to go to Syria and cover the war, but it’s not your war. Covering your war, you break all the rules, even those of ethics, because you’re one of the warring sides.

There’s nothing to like about war. No generation wants its succeeding generation to see war, but our children saw it too.

This article is from the Media Initiatives Center’s new handbook Journalists’ Safety, which will be published (in Armenian) in February 2018.